Ten years down the road 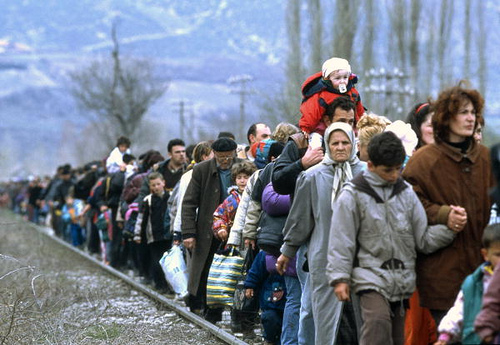 Bombers crossed the sky by night and thousands of desperate people gathered at the borders by day. In Macedonia, at the time of the conflict in Kosovo, the smell of war was in the air. Back then, for most people in the country, it was as close as they had ever been to war in their lives

Ten years ago today on 24 March, NATO began its bombing campaign against Serbia in order to put an end to the violence which was escalating in its southern province of Kosovo. Within days, as a result of the intensified operations of the Serb military on the ground, an estimated 800,000 Kosovars fled their homes and sought refuge in neighboring countries. According to different estimates, Macedonia received between 200,000 - 250,000 refugees.
Asked what they felt back in those days, many (ethnic) Macedonians would probably say - fear. The country was in shock. There was the hum of invisible bombers crossing the sky, taking their deadly load up north by night and, by day, there were thousands of desperate people at the borders.

Macedonians rushed to the stores to stockpile commodities. The smell of war was in the air. By that point in time, for most people in the country, it was as close as they had ever been to war in their lives. Bosnia was near, but yet it wasn't. This was here. One could tell by the sound of planes. If asked, many Macedonians would say they felt more afraid when the war started in Kosovo as opposed to two years later when it started happening at home. And that is the awkward feeling when it comes to war: the closer it gets, the more you get used to it.

It is fair to say that Macedonia did not take the refugees in willingly. Most of them were put in camps around Kumanovo, Tetovo and Gostivar. Some of the luckier ones who had relatives and friends in Macedonia stayed with families. Macedonians, the ethnic ones, did not want them. What they essentially feared was that the refugees could disrupt the country's ethnic balance. Macedonia was, in that period of time, undergoing some of its own ethnic turbulence. Macedonians felt that if the refugees stayed, they could change the ethnic makeup of the country and threaten their majority position. Ten years later, this fear seems rather unfounded, but back then it was on everybody's mind.

Before you knew it, white Pajeros sprawled over the countryside. Relief NGOs rushed in. They ran around the country by day and their staff crowded the bars and restaurants by night. It was the birth of emergency relief tourism.

Yet the country was angry at the international community for the poor financial support it was giving Skopje to handle the crisis. Macedonia felt it had no choice but to take in refugees, but when it asked for money, people seemed slow to pick up the phone at the other end of the line. An unknown deputy minister by the name of Boris Trajkovski was put in charge of a crisis committee which coordinated the government response to the emergency. It is possible that he got the job because it required foreign language skills in order to brief the international press. He made a couple of fair but critical statements about the international community on account of its hypocritical and slow response to the crisis and all of sudden, out of the complete unknown, he became, well, the most popular politician in the country. That popularity won him the presidency later that same year.

Foreign assistance did eventually arrive to repair the tremendous economic damage the country sustained. Trade links with its major trading partner Serbia were interrupted, the economy slumped and jobs were lost. The risk was that the mounting anguish over social distress could spill into the political arena. Fortunately, after 78 days of bombing, Milosevic conceded and the war stopped. As fast as they poured in, the refugees returned. The crisis was over.

The NATO intervention in Kosovo changed the Balkans forever. Whether it was a terrible injustice, as the Serbs see it, or liberation, as the Kosovars see it, the NATO planes changed the region irreversibly.

The argument that it was the end of war as such in the Balkans was somewhat debased when the Macedonian conflict started in 2001. By many accounts, it was a spillover from Kosovo; a consequence of the encouragement and awareness that positive change for some could come through violence. And yet, luckily, the Macedonian conflict did not unravel into a full scale war, even though the country lingered on the verge of war for a while. However, the conflict did change Macedonia. It restructured it politically and made it hopefully better-equipped to deal with diversity and more open to compromise. It is not as if this came easily. It was a painful, traumatic change and it still requires everyday work.

But the NATO intervention did effectively change the geopolitics of the Balkans. Its newest country, Kosovo, which still has a long road ahead in the process of its international recognition, was essentially created by the NATO bombing. Despite the fear of Serbian reaction, Macedonia recognized Kosovo at the end of last year and started building constructive relations with its new neighbor. This disrupted the ties with Belgrade in the short run, but they have since been gradually improving.

However, one expectation that did not materialize, in the span of ten years since the NATO intervention, was that of a great Balkan renaissance. When the bombing stopped, the West promised, there would be a great Marshall Plan for the region; a Stability Pact that would make the region a part of the European economic mainstream. This did not happen. Ten years later, the Balkans still seem stuck on a dusty road, looking for the right direction to take. And even if there were no doubts about which way to go, it was clear that the road would be blocked by a big iron gate and the guards wouldn't let anyone out. When the planes took off ten years ago, the Allies had a deal that Washington would pay for the bombs and Brussels would take care of the time "after the bombs." Well, someone must have kept the receipts?