Synergies and training are needed against SLAPP, or gag complaints 08/07/2022 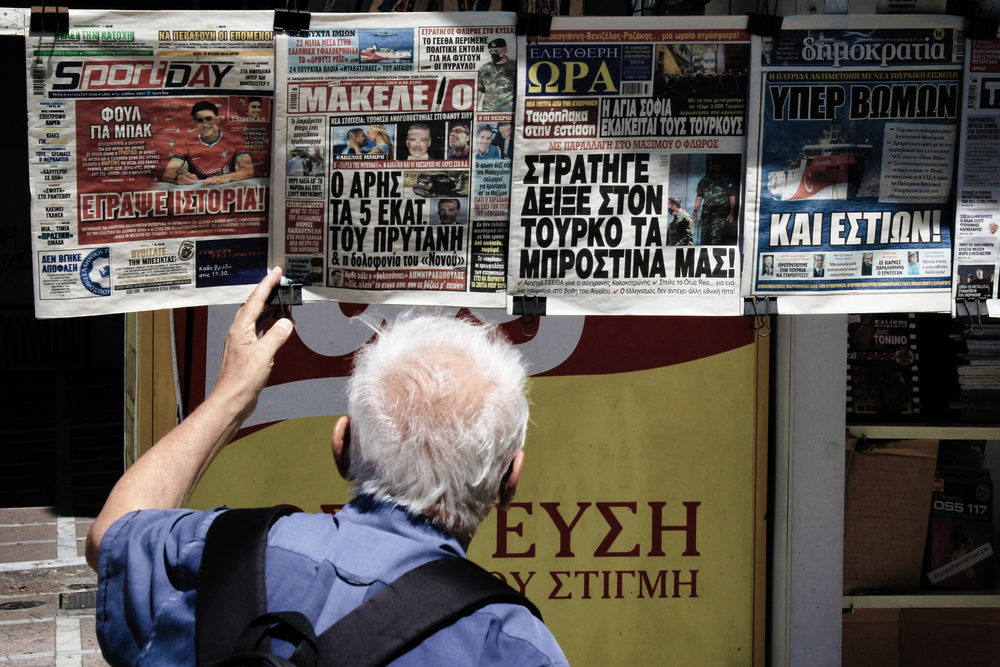 As evidenced by the latest report by Reporters Without Borders, press freedom in Greece today is in great pain. A situation that also has its roots in the unresolved regulatory framework

When, during a press conference in November 2021, a foreign journalist called upon Greek Prime Minister Kyriakos Mitsotakis to ‘stop lying about harsh, brutal pushbacks’ and‘not to insult the intelligence of all the journalists in the world’, everyone present stood speechless.

That was an unprecedented event: it is extremely rare in Greece to see journalists publicly address such direct questions to a high government official, let alone in a fiery and imperative tone of voice. Before labelling the journalists’ accusations as a collective insult against Greek people, the Greek PM pointed out the journalist’s nationality, ‘I understand that in the Netherlands there is a culture of asking direct questions to politicians’, implying that this practice is alien to the Greek cultural norm. A few days after the incident and amid a defamation campaign on the social media portraying her as a ‘spy’, the Dutch journalist left Greece, citing threats against her life and even a physical attack.

This controversial incident is one of the many that have been reported during the last years in Greece, adding to the existing evidence of an asphyxiating social pressure exercised against investigative reporters and whistleblowers. The annual World Press Freedom Index released in early March 2022 classifies Greece as the lowest-ranked EU member for press freedom. The findings illustrated reiterate many of the problems identified in the Media Freedom Rapid Response (MFRR) report published a couple of months earlier, including the rising cases of SLAPP lawsuits targeting journalists, evidence of manipulation of the local media by powerful oligarchs affiliated with the ruling party, and public intimidation of reporters challenging the dominant narrative promoted by the state.

What is particularly concerning is the existence of reported cases against media workers that shocked local society, yet remain unpunished, enabling a culture of impunity and tolerance to crime. A jarring example is the cold-blooded murder of veteran crime reporter Giorgos Karaivaz in April 2021, which remains unsolved despite the government’s pledge to treat the case as ‘an absolute priority’.

The last straw was the criminal code provision adopted by the Greek parliament on November 11, 2021, that makes it a criminal offense to spread “fake news”. Under article 191 of the amended Criminal Code, sharing in public or online any information that “causes concern or fear among citizens” or “disturbs public confidence in the national economy, defence or public health” is punishable by a prison sentence which might range from three months to five years. The punishment applies not only to the person generating the information, but also the director or owner of the outlet publishing it. Before Greece introduced this controversial amendment, Hungary was the only European Union country that had criminalised the spread of “fake news” or engagement in “fear mongering” as part of its controversial policy to tame any voices opposing its Covid-19 related measures. There are fears, now, that the new law might be misused as a tool to further undermine press freedom in the country.

The experts interviewed for the purpose of this article include civil society actors and researchers but also reporters, who have depicted the situation of media freedom in Greece as ‘concerning’. Many shared that they often resort to self-censorship out of fear of having consequences at a social, professional, or academic level. Others reported that more than once they were directly or indirectly obliged to follow guidelines based on donors’ or employers’ interests. These interviewees have chosen to remain anonymous.

A few years ago, a study on Press Freedom and Defamation Laws in Greece, authored by Dr. Eleni Polymenopoulou, had traced the roots of this ambiguity to the formulation and interpretation of the Constitution of Greece. According to the document which was put into force in 1975, after the fall of the military junta and the restoration of democracy, it is a constitutional right to ‘express and propagate one’s thoughts’, as long as this is done ‘in compliance with the laws of the State’ (Art. 14, par. 1). For instance, raising criticism or disclosing certain information related with Religion, the Armed Forces or the President of the Republic (art.14, par.3) can be viewed as insulting or even dangerous, thus falling into one of the categories where exceptional seizure of publication is foreseen.

Alluding to an Orwellian-like order, the Constitution empowers the State to define the things that one should never speak against and take measures accordingly. Here is where the inconsistency lies: a legal framework that was initially based on the idea of protecting fundamental civil rights, but also principles and ideals underpinning the traditional Greek society, could be manipulated to silence different opinions. It is no coincidence that almost all reported cases of systematic defamation, intimidation, or even assassination of media professionals in Greece have been against people who had attempted to expose scandals within powerful institutions, such as the Police, the Army, and the Church. One can see a moral rift at cases where values and norms stereotypically associated with ‘traditional’ Greek society are challenged either by EU values or by the contemporary image of today’s Greek society, that is much more heterogeneous and resilient compared to its past.

The toll of prolonged recession on the Greek media

Another loophole in the system can be traced in constitutional ambiguities in place over the profile of people who might appear as ‘owners’ and ‘legal representatives’ of TV or radio stations and newspapers yet be indirectly linked with politicians. During the last years, phenomena of journalistic misconduct and client relations between the media and rich oligarchs have led to controversial government interventions and a negative public image of the mainstream media, portrayed as weak, biased, and controlled by powerful elites.

Many Greeks still recall the turmoil caused in 2016, when the government launched a controversial media intervention by reducing the number of national TV licenses to four. The official rationale of this decision was the quest for transparency: the ruling party was determined to purify a troubled media landscape, where donor-driven TV channels, many of which in dire financial straits, would serve the interests and ideology of politicians and affluent businesspeople. The government’s main argument was that corruption had to be halted. The local market could not sustain so many media outlets operating and building up debt; in this regard, the only financially viable solution would be the limitation of licenses to companies that could provide proof of earnings, be transparent regarding the source of their assets, and present a sustainable financial plan.

In an interview with OBCT, Nikolaos Panagiotou, associate professor at the School of Journalism and Mass Media Communication of the Aristotle University, identifies autonomy and financial independence of local media as major challenges, which he sees as closely intertwined with the growing decline of journalists’ credibility over the last years.

‘Journalists used to be ‘people’s defenders’. Citizens would trust them to cover their problems and expose the faults of the system. This is no longer the case. Pandora’s box has opened against journalists and, generally, media practitioners; the public opinion does not trust them anymore and at the same time there is a framework legalising attacks against them.

Ten years of ongoing economic crisis have had a dramatic toll on the working conditions prevailing in the media. Their economic modus operandi has been put to the test. This, in combination with failing public trust towards journalism and journalists, has created a negative framework. This is where the biggest problem lies: a prolonged lack of financial viability provides fertile ground for monopoly trading rules to emerge, leading to conditions abridging the freedom of speech. Obviously, the formation of such an environment does not favour a democracy’s efforts to establish a status of accountability’.

Maria Tsioutani, legal counsellor with an active presence in Greek civic life, talks to OBCT about the homogenisation of the Greek media and the need to approach news with a critical eye:

'Although I do not agree that Greece deserves such a low place with regards to media freedom, I believe that quality of information has declined in the last years. Information has been homogenised; on every channel you see the same piece of news. Nowadays, a large part of the Greek population often turns to sources other than the local, mainstream TV channels in order to read or hear another point of view'.

All experts interviewed for this article seem to agree that there many good practices coming from independent portals operating online. As Greeks switch from mainstream media to alternative sources of information, it seems that the road opens for high-quality digital initiatives to pave a new future for media freedom in Greece.