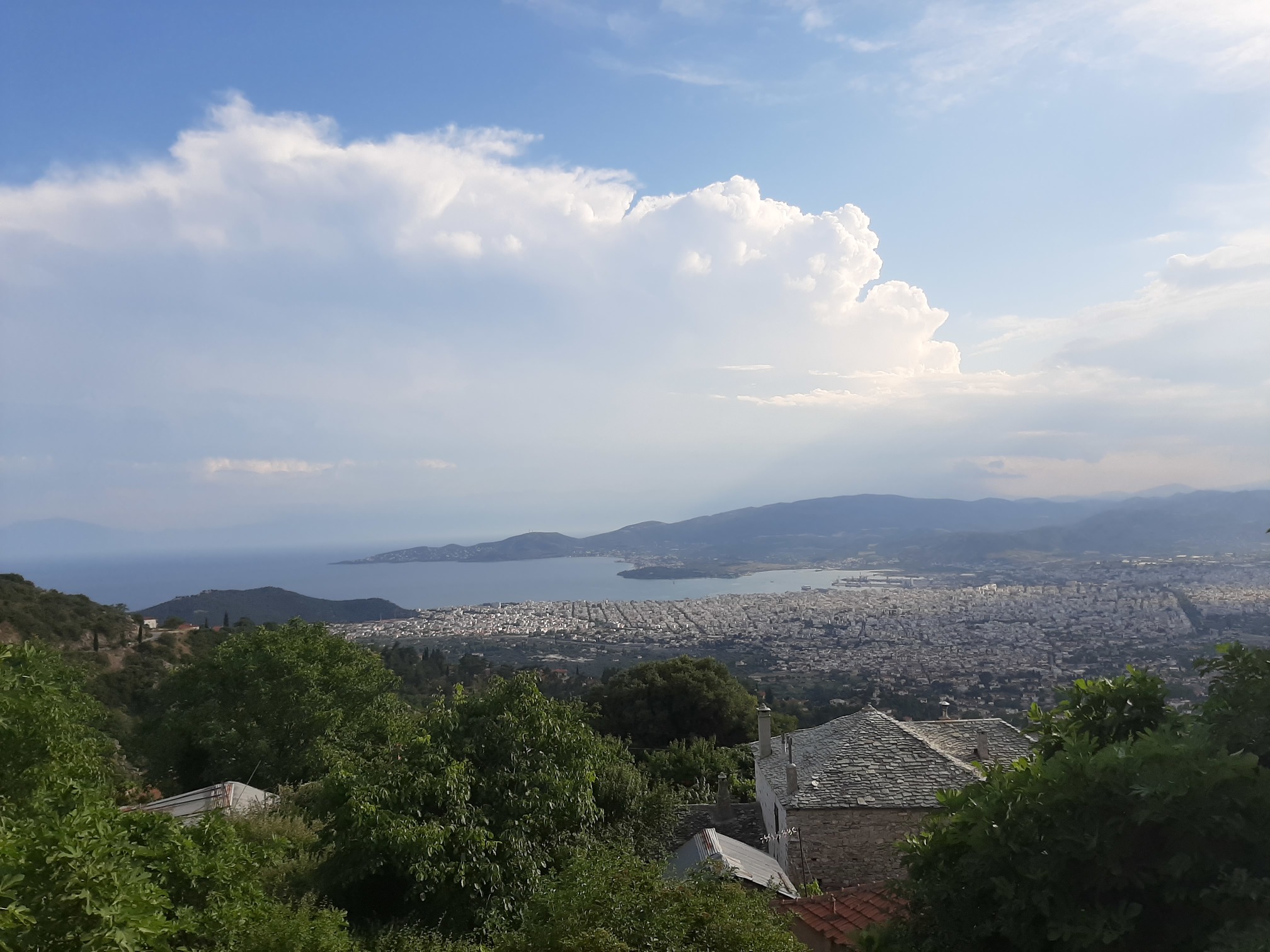 Volos from the Pelion - E.Krithari/OBCT

In Volos, central Greece, people are struggling for the quality of air – threatened by incinerators – and for public ownership of water, but also and above all for a transparent, democratic administration

The Greek port city of Volos, in central Greece, rises between the foot of Mount Pelion, known to be inhabited by the mythical Centaurs in ancient times, and the bay of Pagasitikos, that gently enfolds the waters of the Aegean Sea. It would be a heavenly place to live in, if not for the environmental degradation caused by a cement factory that incinerates imported waste primarily from South Italy, situated in the edge of the city with a population of 150,000.

A new factory for Solid Recover Fuel (SRF) production – which will be used by the cement industry to generate power – is now under discussion. Locals are constantly fighting against these plans, which they see as further environmental deterioration, despite the support shown by the city’s municipal authorities to the project.

The administration has been strongly criticised for their authoritarian practices, not only by the city’s residents, but also by a small community in the outskirts, that believes there are plans under the table for the privatisation or commercial use of their mountainous waters. A growing movement puts the struggle for air and water in the spotlight, but environment is not the only thing at stake.

“To get clean, our town should either be transferred elsewhere, or the factories must leave”, told OBCT cardiologist Mattheos Dramitinos, a member of the regional Medical Association, which – like every other local scientific association – opposes the factories.

According to a June report by the research team at the department of Mechanical Engineering of University of Thessaly, an increased presence of the dangerous air pollutant PM2.5 was detected in the air in Volos, exceeding WHO’s standards by 200% and Greek legislation by 20.12% during the 12-month monitoring period. A recent morbidity and mortality study by the medical school of the University of Thessaly showed a significant increase in cases of some types of cancers as well as strokes in Volos and the wider region of Magnesia compared to rest of Greece’s average, without however clarifying the causes. 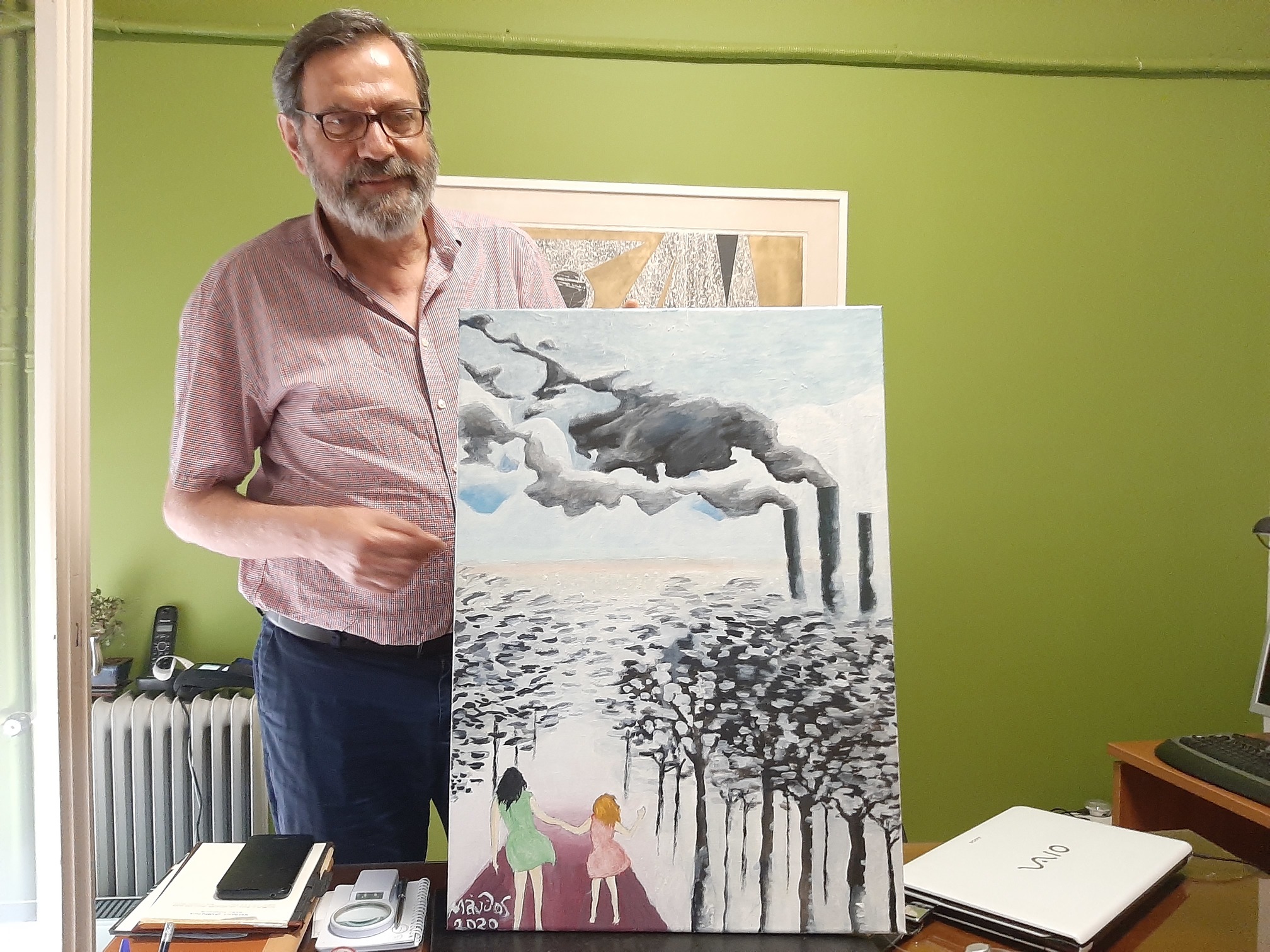 The factory in Volos, owned by LafargeHolcim, is one of the biggest cement producers in Europe, with a capacity of 4 million tons. It burns garbage for its own energy needs and, while incineration treats 30% of the EU’s municipal waste, it still sparks debate for its ramifications. The factory, which operates just 150m from the eastern suburbs of Volos, for decades has received a permit to burn also 200,000 tons of refuse-derived fuel (RDF), namely waste parts that cannot be reused or recycled, and 60,000 tons of sewage sludge, and benefited from the former SYRIZA government’s permission to use the local harbour.

The composition of these fractions is often unknown, thus it can be environmentally harmful. “Even by burning holy water, the factory will still pollute”, says cardiologist Dramitinos, highlighting the unsuitability of the town itself to host industrial production due to its position and structure, that trap the photochemical smog.

The waste is shipped to Volos primarily from the ports of South Italy and Spain, and at least once Morocco. Locals told OBCT that they cannot rule out the possibility that the cargo contains hazardous materials. Besides, the company that runs the factory has declared in the past that they “are not (…) in position to determine whether the above secondary (alternative) fuels come from hazardous or non-hazardous waste (…), as relevant data have not been published" (Government Gazette, Issue 1298 – 13/4/2017).

This was used as an argument by the municipal authorities when the plans to build the SRF factory were first introduced: since the imported waste from Italy is of dubious quality, why not use their own garbage as fuel. However, the new factory in Volos will have a capacity of 50,000 tons, and it will produce SRF for no more than 18,000 tons of waste per year, when the cement factory in close proximity has a permission of 200,000 tons per year. “Volos is turning into one of the biggest incineration facilites in southern Europe”, says Markos Vaxevanopoulos, Dr., geologist and member of the Assembly against Waste Incineration. “This is a big game with big profit, because cement industries receive public funding to burn so-called alternative fuels” (like RDF and SRF).

Locals seem to be ready to escalate their fight, demanding the end of garbage incineration in their town and the enhancement of waste recycling and reuse. “They will give 42 million Euros to package the waste (SRF) that will be sent to the cement factory, instead of supporting circular economy or other forms of waste management. It's apparent that the local authorities want to serve the cement industry”, Vaxevanopoulos concludes.

The natural springs of mount Pelion 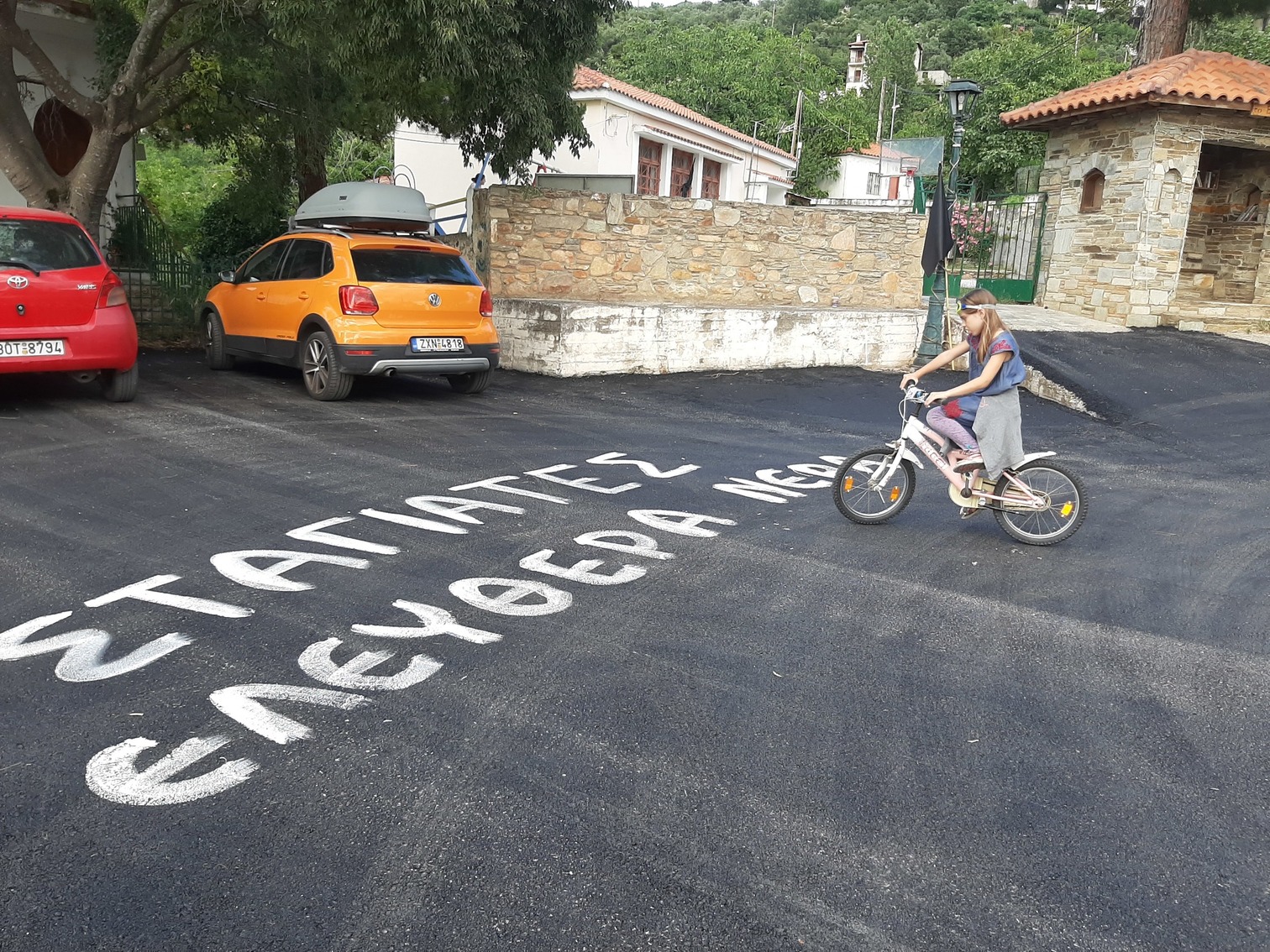 Slogan in Stagiates with the inscription "Free water!"

The unbearable smell of burnt garbage that covers Volos, especially in the morning hours, fades away when moving up towards mount Pelion. One of the most beautiful natural landscapes of Greece, the mountain is famous for its iconic villages, its vivid nature, and the clear water of its springs.

Ten kilometres away from Volos, in the small village of Stagiates, people have dealt with plans of privatisation or commercial use of their waters since 1980s. Almost a decade ago, the water of the village started to taste differently. Without informing the residents, the Municipal Company for water supply and sewerage started to chlorinate it, which was seen by villagers as a way to degrade its quality and turn locals to bottled water.

The citizens' argument has always been that, for more than three centuries now, the small community has been supplied by the same spring without any health implications, mostly because the locals maintain the supply network in good condition, often at their own expenses: “We clean it every year, three times a year. For 11 years they [the municipal water company] never showed up. They didn’t even know where our spring actually is”, Vangelis Galanopoulos, one of the 70 residents of the village and a central figure of the struggle for water, told OBCT. 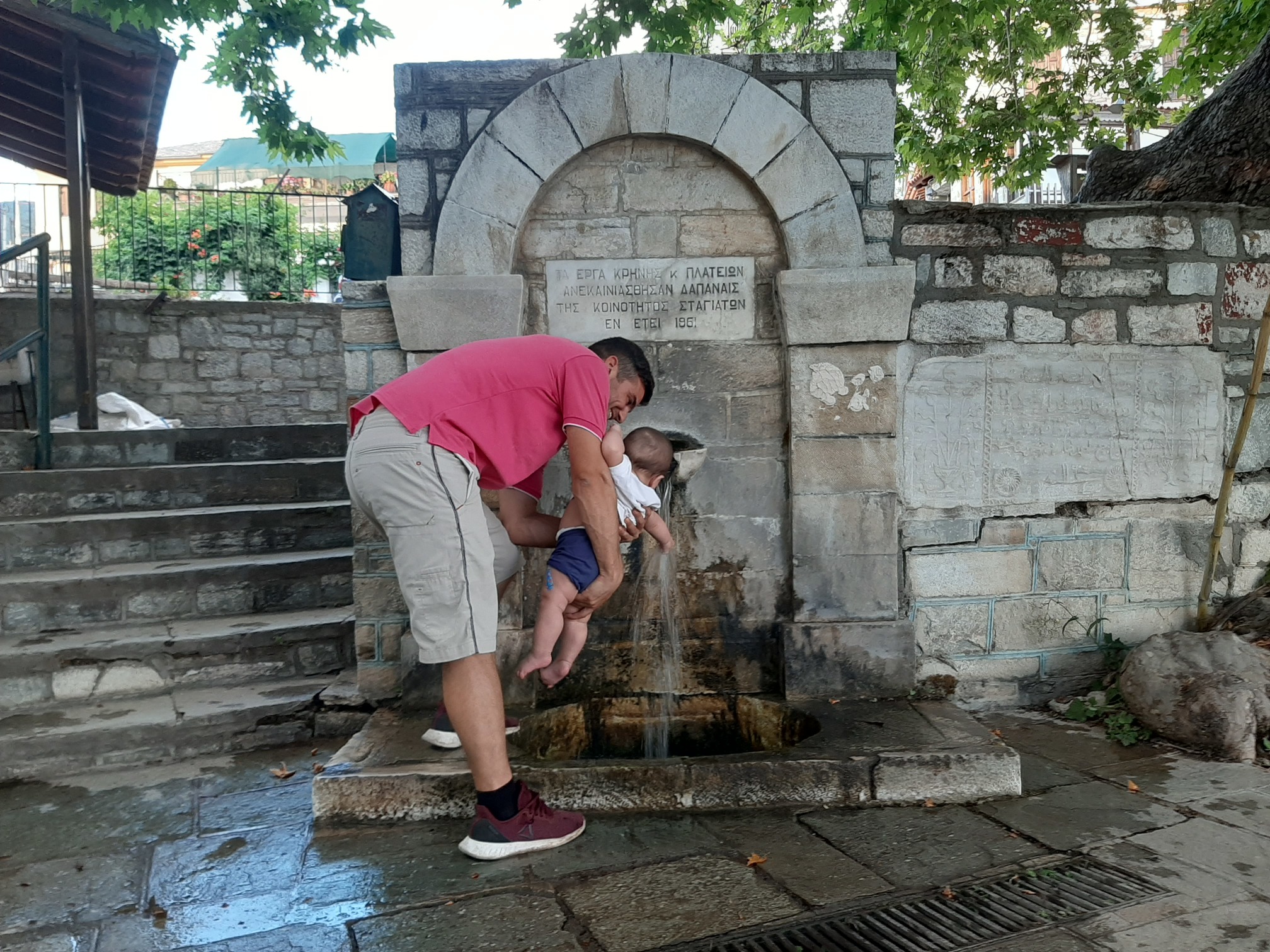 The public fountains where the inhabitants get the water, the only ones left connected to the village's springs

In mid-April, the Municipality blocked the water supply of the village from their spring (the “Cold Fountain”, as it is called), without informing people in advance. “Only the pipe that feeds to the public fountains is left operational”, Galanopoulos explains. People gather all day long around the three operating public fountains of the village, with plastic and glass containers to carry water to their homes, that are now supplied from a near village’s chlorinated spring. “They wanted to make us stop talking about our spring. Downgrading the quality and value of the water is the first step towards its privatisation”, Galanopoulos says, and describes how the relation of the villagers with their spring exceeds survival needs.

The public fountains in the village have been standing almost untouched for centuries. Bearing ottoman inscriptions, they provide locals with a tangible link to their past the same way the untouched water connects them with a different way of living. “Our relationship with the water is not merely biological, but also cultural”, says Maria, a resident.

At the moment, the small community is organised around a local assembly and self-manages the network that still provides water from their own spring. One of the next steps was to sue the Mayor of Volos for his authoritarian decisions and the threats and slander towards the village’s community, during a recent press conference which OBCT attended.

“Our passion to defend our water is not vengeful. Our passion derives from the need to fight and protect the every-day life we choose to have”, Maria highlights.

The press conference on June 19 at the Mayor Hall of Volos was held by Mayor Achilleas Mpeos and attended by his supporters, as the audience was keen to regularly applaud him either for his sexist and offensive jokes or for the passion with which he announced that the SRF factory will be built and that the residents of the small village are “finished”.

Mpeos was elected for a second time in Volos, with 57% in the last municipal elections in May 2019 and a slightly different agenda: his own city council previously supported the shutdown of the cement factory. Before becoming mayor, Mpeos was involved in sports and has been accused of establishing a criminal organisation which set up football matches. For this he has been imprisoned for a year, while his case remains open.

Spending most of the press conference yelling, he failed to provide adequate arguments to support his decision, despite claiming he did so. At some point, he even read the introduction part of the European Directive 2018/850 implying that the document justifies his plans.

Although he has regularly made headlines in the Greek media for his authoritarian and offensive attitude, Mpeos remains the lawfully elected mayor of Volos. Thus, the social movements in the region for the protection of the environment strongly relate to the fight for more transparent, inclusive, and democratic local institutions and the imperative need to hold those in power accountable.