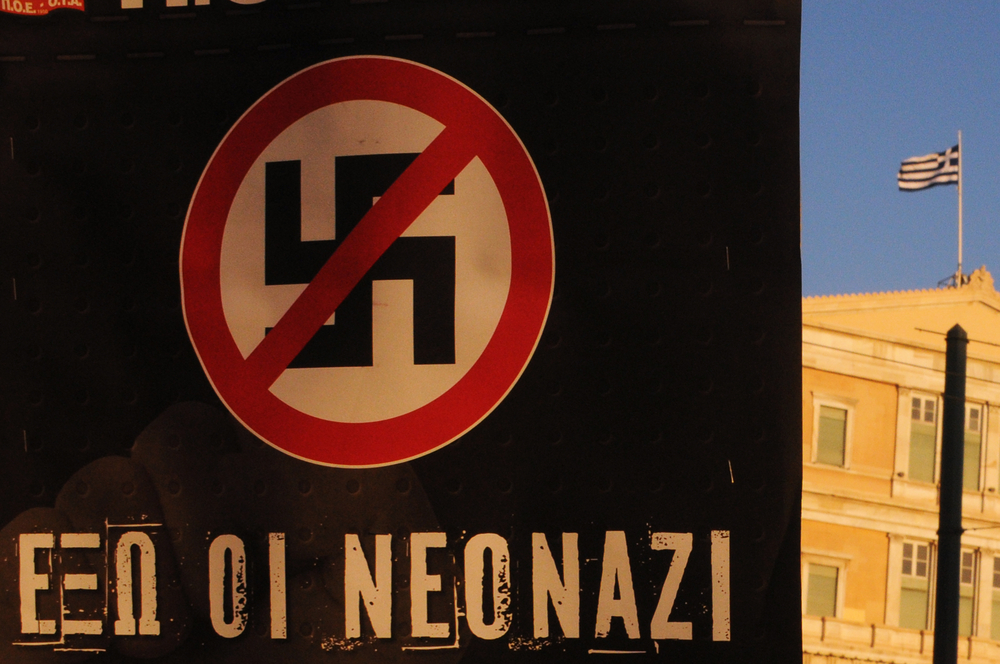 "No to neo-Nazis" (© Kostas Koutsaftikis/Shutterstock)

With a historic sentence after five years of trial, the Athens Court of Appeal declared the neo-Nazi party Golden Dawn - grown under the economic crisis and author of murders and attacks against persons and property - a criminal organisation

On October 7, Greek neo-Nazi party Golden Dawn was declared a criminal organisation. The conviction is the outcome of a 5.5-year historic trial, the biggest in Europe with a fascist political party at the seat of the accused, since Nuremberg.

Over 20,000 people closed Alexandra’s Avenue in front of the Court of Appeal’s headquarters, in Athens, on this warm day of autumn, waiting for the verdict. Political groups, unions, human rights organisations, and individuals formed a sea of antifascist sentiment, shouting slogans, punching the air, and bursting into applause when the news from the courtroom started becoming known.

The Golden Dawn trial had been a long and complex juridical procedure, comprised of four interlinked cases as OBCT had reported earlier. Among the four, this in relation with the criminal organisation was considered as the most crucial for the social and political ramifications it entailed.

So, when presiding judge Maria Lepenioti announced that the three-member tribunal had unanimously found the political leadership of Golden Dawn -all former MPs and a current member of the European parliament- guilty for directing a criminal gang, the crowd inside and outside the courtroom broke into the loudest of celebrations.

“You did it, my son”, shouted Magda Fyssa, the black-clad, heroic mother of the murdered rapper, who never missed any of the 454 hearings. Fyssa has been praised for her persistent fight against the criminal group and along with the prosecution has been the driving force of this trial.

“The decision is historic because it ended the theory of the individual incident. All criminal activities emanated from the gang’s leadership”, said to the Greek media Thanasis Kampagiannis, one of the lawyers of the Egyptian fishermen assaulted in 2012.

There are 69 accused, all Golden Dawn members (68 after one passed away). Most faced more than one charge, including murder, attempting murder, assaults, possession of weapons, running a criminal gang, etc., often related to more than one case of the trial.

Almost everyone indicted on the murder of antifascist rapper Pavlos Fyssas in 2013 and the attempted murder to the four Egyptian fishermen were found guilty as charged - except two in the Fyssas case who were acquitted due to doubt. In the case of the attack to communist unionists, the court pronounced also all the accused guilty but converted the charge from attempted murder to grievous bodily harm.

Following the verdict, defense attorneys requested the court to consider mitigating circumstances for each of their clients. Several arguments were listed in hope for more favourable sentences. “Unfair influence has been attempted on your decision”, told the judges the attorney of Christos Pappas, the deputy chief of Golden Dawn. “Justice has been bullied. I can’t recall such bullying since Jesus’ trial”, he said.

While the public prosecutor had, at an earlier stage of the trial, suggested the acquittal of GD’s members for the criminal organisation, she now rejected the mitigations claims. Sentences are yet to be announced and the final procedures are expected to last a few days more.

Golden Dawn had been active since the early 1980s. In 1993, the small closed group of young fascists was turned to a political party of unsignificant electoral foothold, until the elections of 2012.

The financial crisis that hit Greece in 2010s had created a fertile ground for the most obscure ideologies. Before they found a place in the seats of the Greek parliament, GD members had already built their legacy in criminal acts, which they did not stop after getting elected. In fact, by getting hold of state funding and legitimacy, particularly with the assistance of many mainstream media, they felt more powerful than ever to facilitate their murderous agenda.

Among several attacks on people, properties, and institutions, while in parliament GD members killed the Pakistani Shehzat Luqman, 27, 9 months before murdering antifascist rapper Fyssas. His killers felt so powerful at the time, that when they got caught by police after hours, thanks to eyewitnesses, still carried the bloody knife.

While Luqman’s case was not part of Golden Dawn’s trial, the murderers had been already convicted and the racist motive was recognised by the court. They were now found guilty again, for participating in a criminal gang. Luqman’s parents have been following the Golden Dawn trial closely, sharing their solidarity with Fyssa’s parents.

“No more tears/the tombs are shut now/freedom’s fertilizer/became the first dead”, once wrote Alekos Panagoulis in a poem turned to a revolutionary song, sung after the liberation of Greece from the fascist regime in 1970s. “Pavlos won, freedom won, because Pavlos was freedom”, said Magda Fyssa.

Thanks to Fyssas, who lasted four minutes after getting stabbed and was able to name his murderer, thanks to Luqman and his family, and all the survivors and witnesses who found the courage to testify despite their vulnerable position and the threats, thanks to the lawyers of prosecution who took this huge case pro bono and worked hard for over 5 years, and thanks to a small group of people of the victim’s relatives, friends and antifascists who made tremendous efforts to publicise every aspect of the trial, the criminal gang of Golden Down will be now eradicated from Greek society.

However, a day before the verdict announced, fresh Nazi slogans were found written on the walls of the Jewish cemetery of Athens. For the thousands of antifascists that waited outside the court on October 7, it has by now become apparent that victory against the dark ideologies is not the happy ending of the story, but rather a never-ending process.