Greece: Chrysi Avghi, the darkest side of the crisis 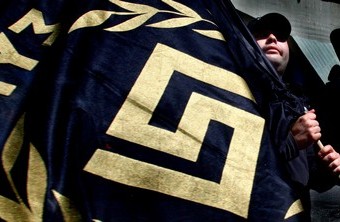 After the failure of negotiations for a new government, Greece is going back to the polls on June 17th. Many eyes are on the neo-Nazi movement Chrysi Avghi ("Golden Dawn"), that has taken advantage of the crisis and attracted consent with violent anti-migrant rhetoric, reawakening eery ghosts from the past. A portrait of the party and its leader, Nikos Michaloliakos

In Athens, a policeman out of two voted for him. This is perhaps the creepiest side of the success of Nikos Michaloliakos, leader of Greek neo-Nazi movement Chrysi Avghi ("Golden Dawn"), which got 7% of the votes in the general elections of May 6th and entering the Parliament for the first time with 21 deputies.

At his first press conference after the elections, Michaloliakos demanded that journalists stand up for his arrival, while supporters greeted him with the Hitler salute. A few days ago, in Athens, a bus controller caught two migrants without ticket. Following the leader's example, he ordered "Stand up, we are in Greece!" and forced them to stand up as a sign of respect. Immediately denounced by two passengers, he said he was a fan of Chrysi Avghi and he had the power to act as he wished. Migrants, according to Michaliolakos, should be barred from entering Greece with minefields at the border with Turkey, along the Evros river, where the largest number of illegal migrants enter the European Union.

The long story of Nikos Michaloliakos

Michaliolakos, 55, has never concealed his support for the Führer nor that for Greek dictator Ioannis Metaxas, who bloodied Greece from 1936 to 1941 before the Nazi occupation of the country. As for the Colonels who held power for seven years after the coup of April 21st, 1967, Michaliolakos met them in prison – namely, in Korydallos' maximum security prison, where he was jailed for several months for participating, in 1976, in the beating of journalists documenting the funeral of Evanghellos Malliu, one of the torturers killed by the group “November 17th”. There, in Korydallos, the colonels were serving their life sentences. And there Nikos returned for 13 months in 1978, for a series of bombings in Athens. In prison he is said to have been ordered by the most infamous of the Colonels, Ghiorgos Papadopulos, not only to found the neo-Nazi magazine Chrysi Avghi, which later gave the name to Michaliolakos' movement, but also to lead the Epen youth organization, founded by the incarcerated former dictator.

Thus began, in the eighties, Michaliolakos' career as a right-wing extremist. Chrysi Avghi was founded in 1985, but became known to the general public in 1993, with the participation in the nationalist rallies in defence of the copyright on the name "Macedonia" against the former Yugoslav Republic of Macedonia. It is no secret that some "chrysavghites" participated in the massacre of Muslim civilians at the side of the Serbs of Bosnia in 1995, although later they were expelled from the party.

Yet, it is only in recent years that Chrysi Avghi has been on everyone's lips in Greece, mainly due to the beating of migrants. Its campaign slogan is: "Sweep away this scum from Greece, and all the traitors of the homeland that let them in". According to analysts, it was this anti-immigrant rhetoric to attract so many votes in the last elections. In times of crisis, foreigners are a classic scapegoat for people's anxieties – remember what Hitler did with the gypsies and the Jews? "I voted for them because a colleague of mine was robbed by a group of Africans" said Leonidas, 63 year old taxi driver, to English-language newspaper Athens News on May 10th. He refused, however, to say his last name – it is difficult to identify those who put the cross on the symbol similar to the swastika.

According to a survey conducted by the Athens News, Chrysi Avghi's typical voter is a young man between 25 and 34, unemployed and poorly educated, probably attracted by the reassuring image à la Robin Hood that the party has tried to build in the suburbs of Athens. Young chrysavghites, muscular and clean-shaven with a beard and stylish t-shirts, were seen escorting old ladies out shopping or to the bank. Too bad Michaliolakos failed to prevent from leaking the news that, among his activities, he would run a luxury brothel, or better the hotel "Sweet Dreams", in Attiki Square in Athens, where "it's nice to relax": a family-run hotel which, among other things, has many female foreign workers.

Back to the policemen who voted Chrysi Avghi – one out of two in Athens, according to an analysis of vote patterns in policemen's districts, particularly in popular areas Kesariani and Ambelokypoi, published by newspaper To Vima on May 11th. What comes to mind are the dark scenes of Theodoros Angelopoulos' films like "Days of 1936", where a police officer and a Fascist squad were synonymous. Certainly, this is not the case today. Yet, in a country that experienced two ferocious dictatorships and the Nazi occupation in the 20th century, it is still scary.