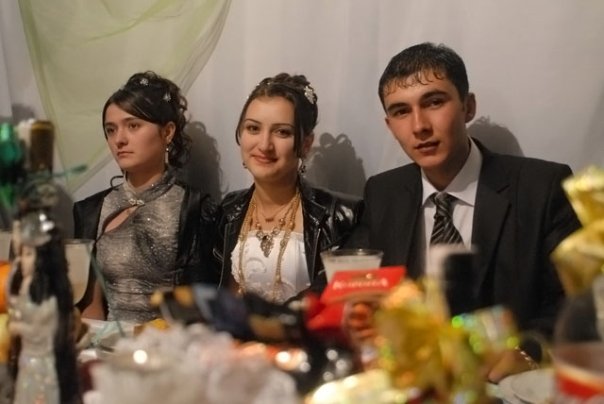 Our correspondents from Baku and Yerevan, Arzu Geybullayeva and Onnik Krikorian, visited an ethnic Azeri village in Karajala, eastern Georgia. A photo-reportage

It was around two in the afternoon when Onnik Krikorian, a journalist and blogger based in Yerevan, and I left our hotel and headed south from Telavi (Georgia) to the small, nearby village of Karajala. We chose to visit this particular village because it is one of the many villages in Georgia populated by ethnic Azeri. And while our highest expectations were to take a few pictures and perhaps speak with some of the local folks, we never thought we would be so lucky as to find ourselves, just half an hour after our arrival, in the midst of preparations for a local wedding. Two complete strangers, we were greeted warmly and invited to the wedding ceremony that was set to take place that evening.

The village of Karajala is only 15 minutes from a small city of Telavi (pop: 21,800) and is easy to get to. Its current population is about eight to ten thousand; mostly ethnic Azerbaijanis (though, by now, most have Georgian passports) and a few Georgian families. By now, most of the Azeri families have been there for several generations, but they still associate strongly with Azerbaijan, and also with Turkey. There is also the religious factor. "We are still Muslims", said one of the local women we met on the street.

Traditions and language have also remained the same. "We would never let our daughter marry a Georgian boy, or vice versa", said another local woman from the village, citing religion as the reason. Marriage age is set quite early for both girls and boys - between 15 and 20 - reminding me of other villages in Azerbaijan I have visited before. But not everyone wants this. The brides' younger, 15-year-old sister said she didn't want to get married so early. She is not the only one. Rasim, the grandson of the village chief, currently age 16, wants to continue his education in Tbilisi where he would like to attend medical school.

A majority of the village population earns a living through trade. According to the Ilyas, the ex-principal of the local school, "Karajala is the village with the highest tax payments because people do trade here and we have a higher income than the other 24 villages in Telavi." His only complaint concerned the roads. Indeed, while driving to the village, we saw roads in poor condition. Roads inside the village were also in poor condition. And water, too, seemed to present another infrastructural problem. There is no constant, running water source apart from open water spigots on the main streets.

We also witnessed residents whose living conditions weren't good. A man called Agali Sardarov, 69, wanted to show us his house where he lived with his wife. The one-story house looked run-down. On the inside, Agali showed us the uneven, holey floors that his wife had covered with blankets. The place was damp and, inside, one felt weighted down. "Two months ago, a young woman came to my house, looked around, took some notes, and after that, the little assistance of 54 Lari about 20 Euro that I had been receiving stopped coming in" said Agali, with tears in his eyes. We left his house with mixed emotions of despair, sadness and uneasiness. However, the words of comfort we received from the ex- school principal gave us hope: "we are united and help each other no matter what happens".

According to Azerbaijani traditions, weddings consist of two ceremonies: first, the "girl's wedding" and then, the "boy's wedding". The girl's wedding is usually much smaller with fewer guests, mostly close friends and family. The boy's wedding comes second and, traditionally, has been the occasion when the bride dons a white dress and a much larger group of guests arrives. Nowadays, the two sides prefer to have just one wedding and rarely hold two different weddings.

But that didn't seem to be the case in Karajala. The wedding we were invited to was the girl's wedding. By the time we got back to the village for the boy's wedding, there were already around three hundred guests there. We were greeted with much warmth and were immediately invited to sit at a table and enjoy the feast. Even though it rained all day that day and there were big puddles in the yard, people were dancing and enjoying the occasion. "It's too bad it rained, otherwise it would have been totally different" said one of the bride's relatives.

Returning to the hotel from the village, I felt exhilarated. Not only did the visit exceed my expectations, but I also came back with many stories to tell. After all, it is not everyday that you get to experience something so colorful and become, if only temporarily, a part of an ethnic community.