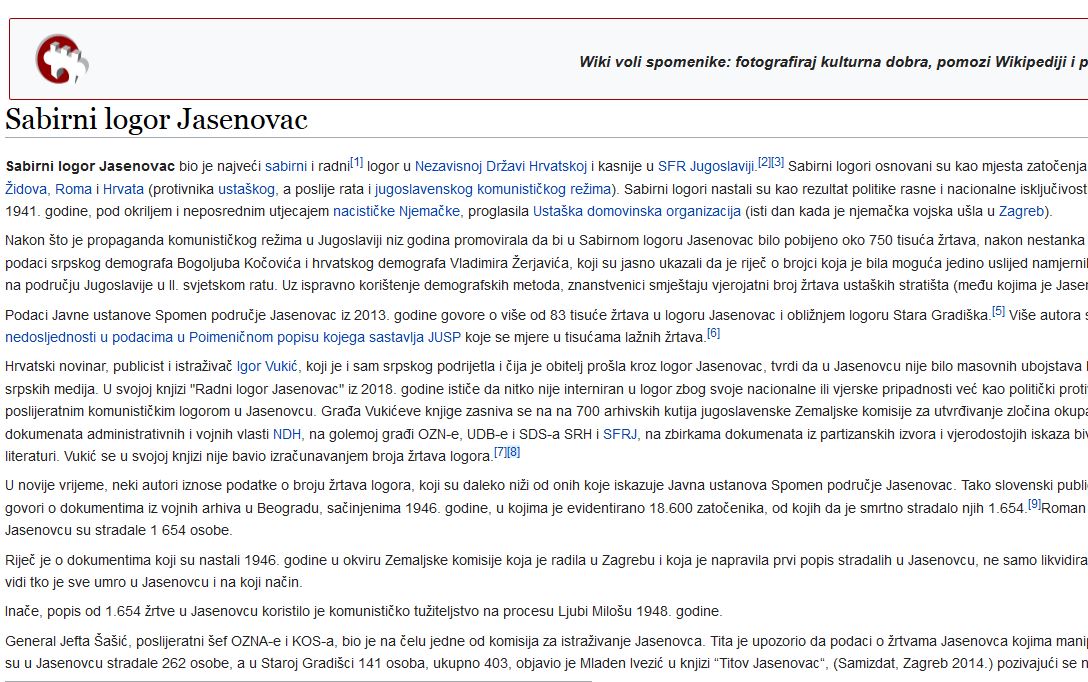 Croatian-language Wikipedia supports revisionist and negationist ideas, in particular the Jasenovac concentration camp, which it defines as a simple "labour camp"

Riding the waves of the rampant historical revisionism which has now become part of mainstream rhetoric in Croatia, Croatian-language Wikipedia has become an advocate – even an inspiration – for revisionist ideas. In a process aimed at a completely uncritical review of the last 70 years in the history of Croatia and the entire ex-Yugoslav area, Croatian-language Wikipedia acts as an incubator of right-wing radicalism.

Although managed by the Wikimedia Foundation, Croatian-language Wikipedia operates independently and in recent years has been particularly focused on trying to rehabilitate the Ustasha regime while demonising Yugoslavia, socialism, communism, and everything related. One of the most dangerous aspects of this tendency is the recourse to historical revisionism devoid of any scientific basis, namely the denial of the genocidal nature of the Ustasha regime and the crimes it committed in the Jasenovac concentration camp. Furthermore, the very reality of the Holocaust is questioned.

One of the most controversial entries is the one devoted to the Jasenovac lager. Although all the other editions of Wikipedia define it as a concentration camp, or even death camp, Croatian-language Wikipedia lists Jasenovac under the heading "sabirni logor" – detention camp, without any reference to mass killings. A few years ago, Wikipedia administrators tried to justify the use of this term, arguing that it was a synonym for a concentration camp, but this is not true.

In the Jasenovac camp lost their lives over 83,000 people (mostly Serbs, Roma, and Jews), many of whom were killed almost immediately after their arrival, and this is why some historians call it a death camp. Wikipedia administrators even justified the term arguing that the Ustasha regime called Jasenovac "sabirni logor", adpting its logic as well as its purified version of the Croatian language. This hypocritical language is comparable only to Nazi terminology, in which deportations to extermination camps were defined as "resettlement to the East".

Over the last month, Croatian-language Wikipedia administrators have gone even further in their "reconstruction" of the history of the Jasenovac camp. While the entry on Jasenovac used to mention also the terms "concentration camp" and "extermination camp" were also mentioned, now Jasenovac is cited as a "labour camp". This euphemism, employed by the Croatian extreme right, has entered the mainstream lexicon thanks to a recent book by Igor Vukić, a self-proclaimed expert on the subject.

Vukić is the secretary of an association called "Jasenovac Triple Camp Research Society", which gathers historians (few), journalists, and alleged experts engaged in rewriting the history of Jasenovac. Through its publications, this association is spreading an absurd thesis that denies the racist character of the Ustasha regime, according to which Jasenovac was not a concentration camp, but a simple detention and labour camp for the opponents of the NDH [Independent State of Croatia].

According to this thesis, during the Ustasha regime about 1,500 people died in Jasenovac, mostly of illness, while in the post-war period the communists turned it into a concentration camp for Croatian prisoners. In other words, the members of this association claim that in Jasenovac, in the period between 1945 and 1951, the communists committed mass murders against Croatian prisoners.

This theory, which does not find any confirmation in the historical sources – which speak instead of German and Italian prisoners of war who were employed in the reconstruction of the town of Jasenovac and in the cleaning of the former concentration camp area – is nothing but a variant of the old thesis born in the environments of the Ustasha diaspora.

The aforementioned book by Vukić, titled "Radni logor Jasenovac" [Jasenovac's labour camp], has received considerable space on national public TV and a review full of praise on the most widely read Croatian daily, Večernji list. Vukić shocked public opinion by stating that the Ustasha sent the Jews to Jasenovac to save them from deportation to Auschwitz. As some noted historians have pointed out, Vukić's book is full of serious factual errors, information taken out of context, and falsifications. The theses advocated in the book, which the author claims to prove through a selective use of sources, are very similar to the theses of Holocaust negationists, who claim that the gas chambers never existed.

Vukić's book, which can be purchased in many bookstores in Croatia, is one of the main sources referred to in the Jasenovac entry on Croatian-language Wikipedia. Resuming Vukić's arguments, the entry reports his conclusions, without indicating the pages from which they were taken, but referring to the reviews of the book published in the press. Therefore, the entry diminishes the crimes committed in Jasenovac, while giving considerable importance to the revisionist theory suggesting that Jasenovac became a concentration camp during the communist regime. In the wake of Vukić's arguments, the article questions the veracity of most of the scientific material on Jasenovac, including the official list of victims of the concentration camp.

In addition to Vukić's thesis, the entry on Jasenovac also cites some pseudo-scientific discoveries by Slovenian Roman Leljak, a self-proclaimed archivist expert. Leljak, sentenced to imprisonment a few years ago for malpractice and financial fraud, is known for his sensationalist and groundless claims about the crimes of communism.

Although he deals mainly with the crimes of the notorious Yugoslav secret services (UDBA) and those committed by partisans against collaborators and the civilian population in 1945, Leljak has recently taken an interest in Jasenovac. Like Vukić, he tries to downplay the crimes committed in Jasenovac, claiming that 18,600 people passed from this camp and that only 1,654 were killed. In his "research", Leljak also used a catalog of objects on display at the Washington Holocaust Museum, including a recipe written by a Jasenovac prisoner, which Leljak falsely presented as a recipe for a dish served to inmates of the lager.

In addition to the controversial entry on Jasenovac, Croatian-language Wikipedia contains many other articles imbued with revisionist ideas, among which those dedicated to the creator of the Ustasha regime Ante Pavelić and to president of Yugoslavia Josip Broz Tito stand out. For a few months, the entry about the city of Gdansk read that in 1939, before the German invasion of Poland, the Poles perpetrated a genocide against the German minority. There is then a whole series of entries that demonise the exponents of liberal and left Croat circles, labelling them as "left-wing extremists".

Furthermore, the entry on Jasenovac, like almost all other Croatian-language Wikipedia entries, contains no reference to scientific literature, but almost exclusively citations of sensationalist articles published in the right-wing press.

Considering that the Wikimedia Foundation has not reacted to warnings about what is happening on Croatian-language Wikipedia, the vandalisation of content is expected to continue, in the wake of the current spreading of the post-truth phenomenon.