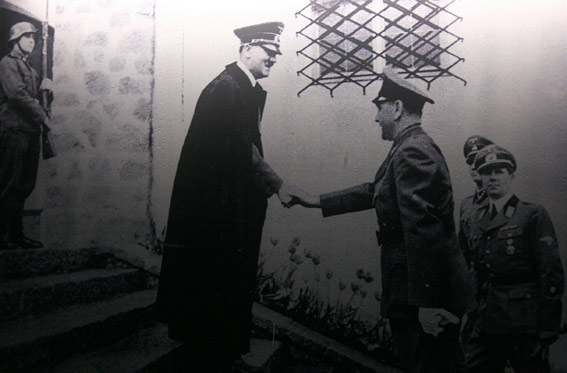 An initiative advocating the use of the Ustaša salute ‘Ready for the homeland’ in the Croatian army has caused shock in the local public, indicating the persistence of a fascist legacy in Croatia

On Monday, the news was that a group of over 3,900 people pleaded the Croatian President Kolinda Grabar-Kitarović to initiate legislative changes that would introduce the Ustaša chant ‘Ready for the homeland’ as official greeting in the Croatian army. Grabar-Kitarović rejected the initiative, describing it as a "provocation".

The list of signatories includes public figures, among them a number of Croatian academics, the bishop of Sisak and the Zagreb auxiliary bishop, the retired football player Josip Simunić (known for shouting the same chant at a football game), but also the former Croatian Democratic Union (HDZ) Minister of Justice Zvonimir Separović, who was the initiator of the Croatian genocide lawsuit against Serbia (then Federal Republic of Yugoslavia), in 1999.

The chant ‘Ready for the homeland’ was designed and used by the fascist and Nazi collaborator Independent Croatian State (NDH) during WWII, and has no analogies in the current form throughout Croatian history, as proved by the vast majority of Croatian historians. This greeting was used by the Ustaša who pursued a policy of genocide and the Holocaust, similar to the one of the Nazi SS movement, on the NDH territory. The Ustaša persecution of Serbs, Jews, Roma, antifascists and all opponents of the regime resulted in the creation of the concentration camps in Jasenovac where, between 1941 and 1945, over 83,000 people were killed.

The European analogy to the chant ‘Ready for the homeland’ is the German Nazi salute ‘Sieg heil’, and "Heil Hitler". In Germany, such initiatives would cause far more negative reactions and possibly legal consequences for the initiators. In Croatia, such a reaction did not occur, and this should not provoke astonishment.

Although the vast majority of Croatians are in no way supporters of the Ustaša regime, of fascism nazism or their iconography, a minority does so. This minority is loud, and well represented in the public debate, on the media and social networks. Many Facebook pages are dedicated to glorifying the NDH, as well as the aforementioned football player, Simunić, who was severely punished by FIFA for his act, addressed to thousands of spectators at the Maksimir Stadium in Zagreb in November 2013. Also, on the Croatian version of Wikipedia, articles related to the NDH, the Ustaša and the NDH leader Ante Pavelić perform historical revision, including categorizing Jasenovac as a 'collection camp' (“sabirni logor”).

The chant ‘Ready for the homeland’ was heared at football matches, concerts, and at this year's 20th anniversary of the military operation ‘Storm’, in Knin. Each year, on the anniversary of Ante Pavelić's death, a church in the centre of Zagreb holds a memorial service, a circumstance which caused sharp criticism from the Simon Wiesenthal Centre in December 2014. The event serves as a glorification of the Ustaša regime, relativizing its crimes.

Besides the minority that holds a positive attitude towards the very nature of the Ustaša regime, there is a silent and apathetic majority that believes the problem can be solved either by ignoring it, or by silently approving or conforming. For these phenomena, causes should be sought in the period between the Second World War and today.
Bleiburg, the site which became a symbol of the suffering of the Ustaša and NDH home guard units, and of the civilians accompanying them, remained outside the borders of Yugoslavia, allowing thr glorification of the Ustaša regime and revisionism of every kind. At the end of the 1990s, Bleiburg was used as a neuralgic point in the creation of a new Croatian identity. The commemoration in Bleiburg, until 2012, remained under the sponsorship of the Croatian parliament. Likewise, socialist Yugoslavia contributed to the unresolved role of the Ustaša and of other collaborator movements in the country, due to its approach, characterized by writing history from the side of the winners, which required no dealing with the past. While German society (primarily West Germany), after a heavy defeat and imposed peace, had to face the consequences of the Nazi regime and their role in it, a similar catharsis was lacking in the Yugoslav society, which exclusively celebrated the anti-fascist struggle and victory. The fact that Josip Broz Tito never visited Jasenovac, clearly indicates the absence of dealing with the past that would start from the highest political and statesmen positions.

During the 1990s, the Croatian president Franjo Tudjman did several very problematic statements on the NDH, thus allowing a rehabilitation of the regime. Already in his speech in 1990 he said, "that the NDH was not simply a 'collaborationist' formation and a 'fascist crime' but also an expression of the political aspirations of the Croatian people for its independent state" and of the desire to realize the Croatian state under the Axis powers. Also, Tudjman advocated a national reconciliation between the Ustaša descendants and anti-fascist Partisans, for the alleged benefit of the newly created Republic of Croatia. He went so far as to propose that the bodies of the Ustaša and of their victims were placed in a common grave in Jasenovac, modelled upon the General Franco system, blending the bones of fascist phalanx and Republican fighters. Besides him, other members of HDZ had even stronger revisionist speeches, while some right-wing parties, such as the Croatian Party of Rights (HSP), praised the Ustaša regime and took up its iconography, including the chant ‘Ready for the homeland’. Some of these activities were tolerated for mobilizing Croatian citizens in the war against rebel Serbs and Yugoslavia.

Not to be ignored, a series of official symbols of the democratic Croatia, such as the checkerboard on the coat of arms and the official currency, kuna, were taken from the NDH with minor alterations, bringing people to lose the necessary distance towards the Ustaša iconography. The strong anti-communism, and the orientation towards the Catholic religion, were guidelines of the Independent State of Croatia, but also in the 1990s, and somehow today. Therefore, the Ustaša are often perceived as a protection from Chetniks and Partisans and from, respectively, Serbian nationalism and communism, preserving the Croatian national and Catholic identity. Also, the war of the 1990s caused historical events to be read backwards, and events of the Second World War to be interpreted through the prism of events of the last war. The four-year war with Yugoslavia and Croatian Serbs reduced the very empathy towards Serbs as the biggest victims of the Ustaša regime. Also, propaganda exaggerating the scale of crimes of the Ustaša regime, initiated by Serbian intellectual circles (the numbers of Serbs killed in Jasenovac were strolling to over half a million), caused equally radical responses from the Croatian side, where a parliamentary committee claimed that only about 2,000 victims died in Jasenovac.

More than 3,000 monuments dedicated to anti-fascism and to the memory of crimes committed by the Nazis and fascists were destroyed during the 1990s, thus supporting the promotion of social and institutional oblivion.

The Croatian education system also played a role, contributing to the confusion of the younger generations towards the Ustaša regime. High school students’ visits to the site of Ustaša crimes in Jasenovac are rare. The scientific community works as an incubator for some of these revisionist ideas, including Croatian historians who deny that Jasenovac was a concentration camp.

As for today's political scene, President Grabar-Kitarović shows inconsistency in clearly condemning the Ustaša regime; thus, while expressing her condolences for the victims of Jasenovac, she missed the opportunity to mention who were the perpetrators. In addition, when giving tribute at Bleiburg, she failed to mention that some of those killed were perpetrators of serious crimes, or sympathizers. Nevertheless, when she visited the Yad Vashem Centre in Jerusalem, she held a speech in which she clearly condemned the Ustaša regime, thus bringing even more confusion.

Croatia also has a problem with the legal framework that should prohibit the glorification of the Ustaša regime in the public space. While the Croatian Criminal Code sanctions anyone who directly calls for hatred and violence, or the symbols that reflect this call, those symbols are not explicitly specified. The chant ‘Ready for the homeland’ is not prohibited itself, but it can be sanctioned only as an incitement to hate and violence. However, the final decision has to be made by the Court, while, for instance, in Germany the chant "Sieg heil" is prohibited whatsoever. Sometimes, the Croatian State Attorney will not resort to criminal sanctions, but to misdemeanour; such was the case for Simunić, thus failing to impose prison sentences that would send a clear message to society.
The chant is also an integral part of a popular song by Croatian nationalistic singer Marko Perković Thompson, and of the coat of arms of the association of veterans of the Croatian Defence Forces (HOS), HSP's paramilitary units during the 1990s war. The HOS has written ‘Ready for the homeland’ in its legally approved coat of arms, flag and seal, although police removed the same inscription from their monument in Split. There are also several organizations, legally registered, whose symbols, statutes and programs have elements of Ustaša iconography and historical revisionist claims.

Croatia also has a few streets named after the NDH minister Mile Budak. Budak was the author of the notorious statement that the issue of Serbs in NDH should be resolved by ‘re-baptizing one third, expelling the second third and killing the last third". At the end of 2013, a street named "10. April ", marking the day on which the NDH was founded, was banned. By the mid-2000s, a monument to Jure Francetić, Ustaša commander of the Black Legion, was removed under the direct order of Ivo Sanader, Prime Minister at the time.

Finally, Croatia allowed active participants of that regime to have the right to a pension, through vague pension provisions for members of the "Croatian Homeland Army from 1941 to 1945", under which definition are hidden members of the Ustaša and Home Guard units. There are at this moment around 9,000 of such pensions in Croatia.

The roots of the problem of Ustaša legacy go deep into the institutional and social framework of Croatia, and it is not expected that the situation will change in the foreseeable future. The effects of a long recession, current tensions between the Croat majority and the Serb minority and the upcoming elections will postpone once more dealing with the Ustaša past, leaving the issue to political arena and street chauvinism.