The once beautiful, blue Danube 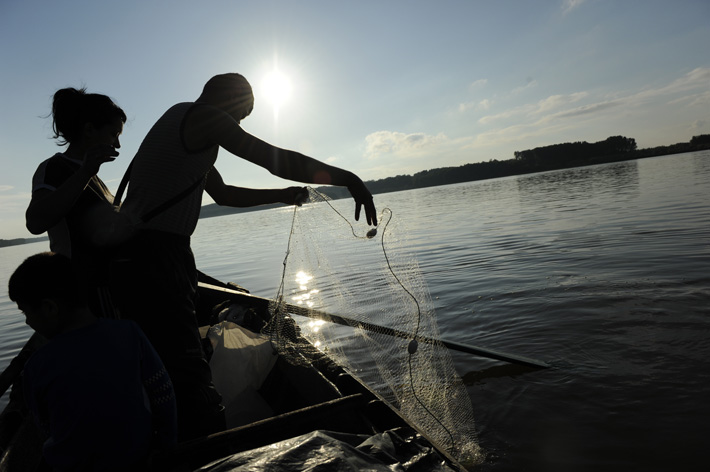 The mysterious sturgeon, an indicator of the river's health, is at risk. Bulgaria, Romania and the WWF strive to protect it

The net emerges slowly from the golden, almost still water of the great river, pulled aboard by rhythmic, ancient gestures. The last patch, dripping, is placed on the blackened bottom of the hull: nothing, except a few broken sprigs dragged by the stream.

The EP has regularly taken the initiative in the field of water protection. In January 2000, following the oil disaster caused by Erika, it called for a sustainable, long-term European transport policy to prevent any further oil pollution disasters. Concerning the Marine Policy, the EP stressed the importance of biodiversity, eco-innovations, the effects of climate change on the seas, and the target of achieving good ecological status.

In June 2008, the EP supported by a large majority new EU water quality rules. Requiring a revision of the list of priority substances within 2 years after the entry into force, the EP has ensured the possibility of expanding the list of toxic substances. Furthermore, the objective of entirely phasing out the emission of 13 ‘priority hazardous substances’ within 20 years was reinforced.

Following this, in 2012 the Parliament contributed to the update of the Directive with new priority substances. In the 2012 report on the Implementation of EU water legislation, the EP called for additional emphasis on the regional dimension, urged the need for reliable data, highlighted the mainstreaming of issues concerning water, supported a holistic approach on water protection and promoted research and innovation in this area. Parliament has welcomed and supported the Seventh Environment Action Programme and the Blueprint for Europe’s Water initiatives.

In February 2014 the EP ENVI Committee hosted a Public Hearing on the first ever citizens’ initiative, ‘Right2Water’, which calls on the Commission to propose legislation implementing the human right to water and sanitation as recognised by the United Nations. In particular, the initiative urges the EU institutions and Member States to ensure that all inhabitants enjoy the right to water and sanitation and that water supply and management of water resources not be subject to ‘internal market rules’ and liberalisation.

"We have been looking for young sturgeons since last year, but with no luck so far: it is a sign of how tragically impoverished the Danube has become in the last few decades". Yordan Kutsarov, WWF expert, was born and raised in Tutrakan, on the Bulgarian side of the river. Today, he runs a three-year project ("Joint action to raise awareness on the exploitation of the Danube sturgeons in Romania and Bulgaria "), involving Bulgaria and Romania, aimed at collecting new data on sturgeons and involve fishing communities on the shores of the Danube, in an effort to protect this fascinating family of fish, now classified as at "serious risk of extinction".

"The five sturgeon species present in the Danube today [beluga, Danube sturgeon, starry sturgeon, sterlet, bastard sturgeon] are a real thermometer of the river's health. Today we know dramatically little about them, which is why it is so important to find out more about their population", explains Kutsarov while we return to the small river port of Tutrakan, sailing along the shore covered with willows and poplars.

Sturgeons are as old (they appeared about 200 million years ago, at the time of the dinosaurs) as they are mysterious. They usually live in the sea, but in order to breed and lay eggs they swim for hundreds of kilometres in the rivers in the northern hemisphere.

The non-fertilised eggs, from which we get the valuable caviar, have led to overfishing of these large animals, which in the most impressive species can exceed two thousand pounds. Such exploitation has decimated the population since the twentieth century. Only in Romania, fishing has gone from 1,144 tons in 1940 to just eight in 1995; in Bulgaria, from 65 tonnes in the 40s to 25 in 1995-2004. To complicate matters, there is the long life cycle of the sturgeon, which needs 5-15 years to reach sexual maturity – a characteristic that makes the recovery of the species a very tiring process.

A situation so critical as to repeatedly attract the attention of EU institutions, which Bulgaria and Romania joined in 2007. In January 2010, a resolution of the European Parliament called on the Commission to adopt a comprehensive strategy for the Danube area, citing the protection of the sturgeon as an objective to be pursued. The invitation was accepted in the strategy's final draft, which was approved by the Commission in 2011 and also gave birth to a special task force for the Danube sturgeons.

"Both Bulgaria and Romania have introduced a total ban on fishing for sturgeons, a ban that will last until 2015. This is definitely a step forward, but many problems remain”, says Ivan Hristov, coordinator of the WWF programme "Water Environments". Some of these are structural, such as the construction of the large "Iron Gates" dams, between Romania and Serbia, interrupting the migration of the sturgeons. But also the exploitation of the seabed and the intense navigation, which disrupt spawning, but also poaching, which is difficult to monitor and counter.

The drastic decline of the sturgeon puts at risk not only the wealth and biodiversity of the Danube, but also the social and historical environment. Today, in Tutrakan, there are only two hundred professional fishermen: for them, the disappearance of the most coveted prey is a serious limitation that threatens jobs and traditions.

"In principle, I agree with the fishing ban, also because now the sturgeons in the Danube can be counted on the fingers of one hand", says Andrian Radev, 30, for fifteen years a fisherman. "But we would like rules and guidelines to be discussed with us, not just poured from above: this is about our life, our future, and that of our children".

The WWF project attempts to involve the fishing communities of the Lower Danube. "Without a dialogue with fishermen, without their knowledge handed down for generations, you cannot protect the sturgeon and the delicate ecosystem of the Danube", states Kutsarov.

Today, for example, in an almost total lack of information about the actual presence of the sturgeon in the Bulgarian-Romanian section of the river (480 kilometres long), the few available data come almost exclusively from the fishermen active on the Danube. Even surveys and research would not be possible without the active cooperation of those who know every inch of the river, because of both their work and passion.

As we prepare to say goodbye to Tutrakan, we are warned that one of the boats hoisted a baby beluga. "It's the first success after two years of efforts", Hristov says excitedly. "An important sign: it means that the sturgeon continues to reproduce in the Danube. The long wait, however, confirms that the situation is not good at all. Our work is just at the beginning, and the good results are far from obvious".