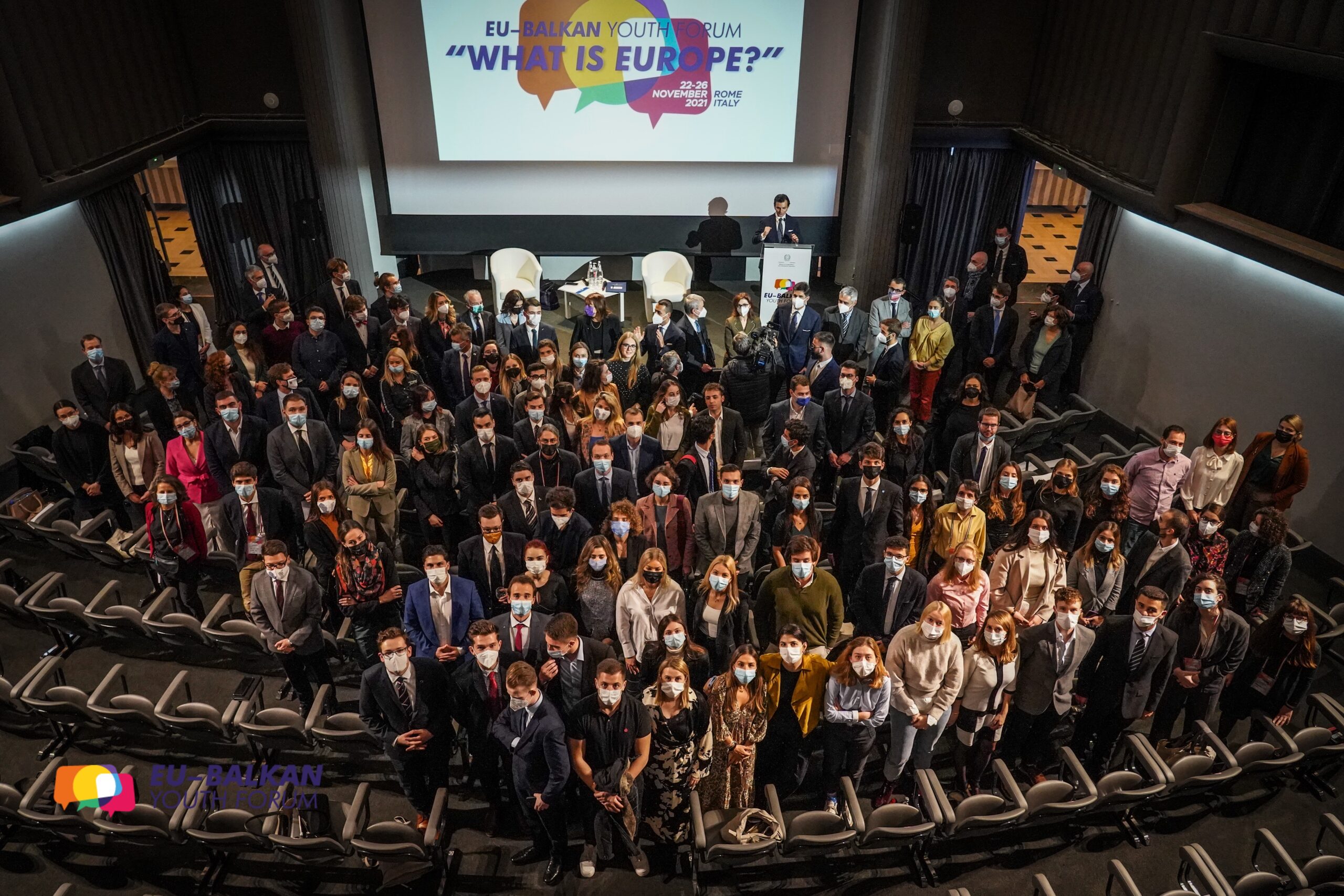 Group photo on the final day of the forum - Paolo Martino

What is Europe? This is the question that animated the week of group work and international conferences that saw as protagonists young people from the 27 member states of the European Union and the 6 Balkan countries, gathered in Rome last November on the initiative of the Italian Ministry of Foreign Affairs.

"During the EU-Balkan Youth Forum many shared ideas and sensitivities emerged on the meaning of European integration and on the Union that these young people would like to see in the future. In the five working groups, there are those who wanted to emphasise the development of a common identity and those who preferred to highlight the tangible advantages, such as freedom of movement", said Zrinka, a Croatian student. “The key points that animated the discussions were the desire to relaunch the integration project, the defence of democratic values, and the request for institutions' transparency”, said Sara, rapporteur of the working group dedicated to environmental protection.

The forum was created on the initiative of the Italian Ministry of Foreign Affairs in collaboration with Osservatorio Balcani Caucaso Transeuropa, the Centre for International Political Studies, the Regional Cooperation Council, and the Regional Youth Cooperation Office. The participants, supported by mentors and representatives of the Young European Ambassadors, were divided into five thematic working groups related to the future of European integration: government cooperation and democracy from below; memory and reconciliation; environmental protection; economic integration; digital space. The working days were attended by – among others – Foreign Minister Luigi Di Maio, Minister for Youth Policies Fabiana Danone, President of the Italian Parliament Foreign Affairs Commission Piero Fassino, and Vice President of the European Commission Dubravka Suica.

"If there is one thing we know for sure, it is that if we are all here together it is because we want an EU of 33 states", continues Zrinka. He is not alone in his desire to go beyond the traditional narrative that distinguishes the 27 EU member states from the 6 Balkan countries.

Among the other most apparent aspects of the meeting is the desire for a different Europe, in which the voices, ideas, energy, and enthusiasm of young people are listened to and embraced by institutional processes, making the integration project more accessible and accentuating the concrete benefits that this brings to the life of every citizen.

Finally, we looked at a Europe of 33 that is more inclusive and cohesive. "For me, the new EU – says Annika of the University of Berlin – should be a Union in which it is worth living in each of its member states, with equal living conditions". "This implies – adds the German law student – that it is necessary to fight youth unemployment to address the problem of brain drain, which afflicts above all the countries of south-eastern Europe".

A network of young Europeans

"Perhaps the biggest success of the forum, made even more significant by the opportunity to meet live for the first time since the start of the pandemic, was to create a European network of young people engaged in the integration process of the Western Balkans. The participants showed their genuine interest in Europe becoming truly politically united one day. Their enthusiasm and the desire to get involved, in addition to the knowledge of the topics covered, was palpable both in the working groups, where all the countries were represented, and in the conferences in which they actively participated", highlights Alessia, rapporteur of the working group dedicated to the theme of reconciliation.

This is not to deny the complexities that our Europe is facing and the difficulty of contextualising individual experiences in a common European historical memory. This was discussed in particular in a working group dedicated to the theme of reconciliation. It was from these reflections that one of the strongest gestures of the entire week was born: instead of choosing a single representative to present the results to Vice President of the European Commission Dubravka Suica and Foreign Minister Luigi Di Maio, the group was represented by a young man from Serbia and a Bosniak young woman.

Now the conclusions of the forum, presented during the final day to Vice President Suica and Minister Di Maio, will be published on the platform created by the EU for the Conference on the future of Europe which, as stated by the Vice President herself, is "in full swing".

Recommendations include accelerating the ecological transition across Europe. In fact, participants reiterated the urgency to start by applying the existing regulations – especially in the field of environmental protection – while guaranteeing more inclusive decision-making processes and promoting greater public awareness to combat fake news and disinformation through digital literacy courses.

In this regard, another transversal priority that emerged concerns the creation and strengthening of links between civil society organisations and young people from different countries to intensify the exchange of experiences, knowledge, and best practices, paying particular attention to local territories.

Finally, great emphasis was placed on education. In the working group on memory and reconciliation, the role was stressed that the EU can play in promoting the creation of a common framework to counter nationalist narratives, favouring exchange programmes capable of uniting young students from different countries, who often carry the weight of a past they had no part in and in which they do not recognise themselves.

At the end of the meeting, Minister Di Maio stressed the importance of the fact that young European citizens found themselves in Italy, in Rome, discussing how to build a better Europe. After all, the forum is conceived as a starting point, as specified by Nicola Minasi, Coordinator of the Forum for the Foreign Ministry. Now, thanks to the relationships established, young people will think together about projects aimed at favouring the process of European integration. The exchange of ideas has already begun: “The most important thing for us is that this group remains united. The Ministry of Foreign Affairs and International Cooperation will finance projects proposed by the groups if the young people are able to present credible ideas that at the same time unite EU member states and Balkan countries”, concluded Minasi.