War in Ukraine, the Balkans hold their breath 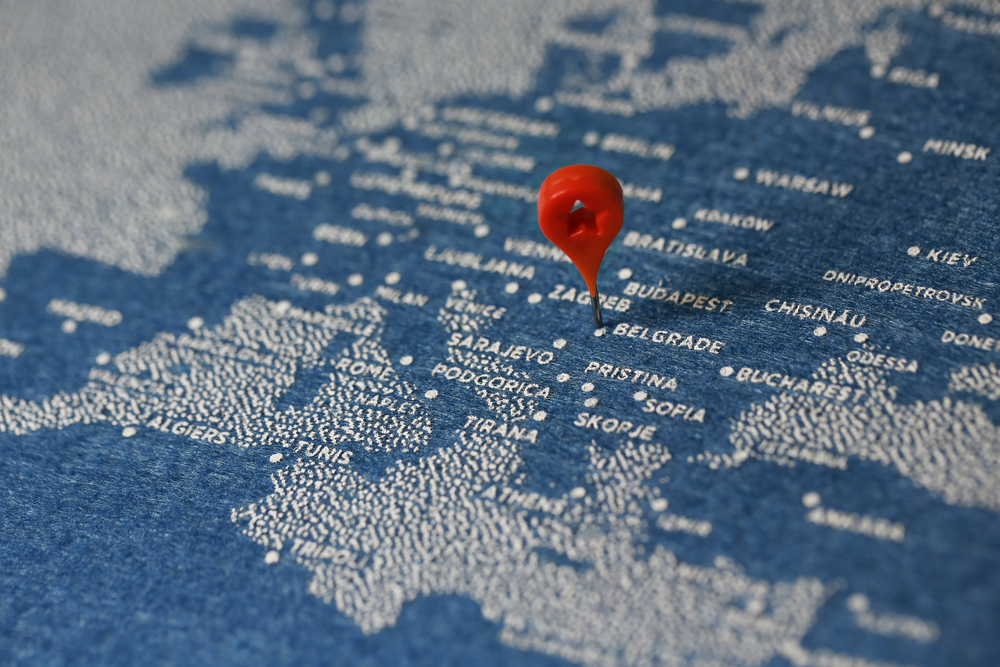 A map of the Balkans - © Lewis Tse Pui Lung/Shutterstock

Concern is growing in the Western Balkans about the evolution of the war in Ukraine. Geopolitical and economic issues make the region one of the areas particularly sensitive to possible serious repercussions linked to the ongoing conflict

There are many reasons why the Western Balkans are watching the unfolding war in Ukraine with particular apprehension. From geopolitical reasons, with the traditional link between Russia and Serbia (the only European country with Belarus that has not imposed sanctions against the Kremlin) and with the rampant separatism of Putinian Milorad Dodik in Bosnia and Herzegovina, to economic ones, for example the imminent closure of the Russian bank Sberbank in Europe, present in many countries of the region. Portraying the situation is not easy, as every hour brings new military, diplomatic, and economic developments. But let's try to outline what is happening and what the future scenarios in Southeast Europe could be.

Towards a crisis in Bosnia and Herzegovina?

"If [Russia] conquers Ukraine, the most vulnerable spot in the Western Balkans is Banja Luka". Stevo Pendarovski, president of North Macedonia, commented on the Russian invasion of Ukraine on Friday 25 February. Bosnia and Herzegovina has been under observation by the international community for months, i.e. since Milorad Dodik, the leader of Republika Srpska (RS, the Serb-majority entity in BiH) that has been threatening to secede for years, went from words to facts, with the creation in Banja Luka of agencies and institutions parallel to those that already exist nationally in Sarajevo. It is not just rhetoric: in December 2021 the RS parliament approved a law sanctioning the withdrawal of the entity from BiH's judicial system, tax administration, and army. Parliament gave the Banja Luka government six months to complete the transition, thus until June 2022.

Many denounced what has been called "the greatest existential crisis [in Bosnia and Herzegovina, ed.] since the end of the war", to quote the words of High Representative for BiH Christian Schmidt, but the latest international intervention gives an even more concrete idea of the level of concern. On Friday 25 February, head of European diplomacy Josep Borrell announced  the strengthening of the Eufor Altea peacekeeping mission in Bosnia and Herzegovina: NATO's military presence in the country will increase from 600 to 1,100 units. "We will see provocations in the Western Balkans and especially in Bosnia and Herzegovina", explained Borrell. In other words, it is feared that Dodik will take advantage of the general confusion to proceed with the secession, but he is not the only one who could be tempted to act. Dragan Covic, the leader of the Croatian-Bosnian nationalist party HDZ-BIH, has also been pushing for a review of the Dayton Accords for months and dreams of creating a "third entity". Zagreb makes no secret of wanting to support the project.

The increase in international troops in Bosnia and Herzegovina – their number however remains symbolic more than capable of averting a conflict – must therefore be interpreted as a deterrent against those who want to take the European Union and NATO by surprise by changing the status quo in the country. In the long term, however, Brussels will have to solve the problem by dialoguing with Banja Luka (and Belgrade) as well as with Zagreb and with the Croatian-Bosnian nationalists. Until there is a reform that allows Bosnia and Herzegovina to become a functional country, the crisis can only be postponed and not averted. Meanwhile, the latest development: a phone call  took place yesterday between Russian Foreign Minister Sergej Lavrov and Dodik. The two – said the Bosnian Serb leader – agreed on the implementation of some "agreements signed with Putin in December 2021". As of now, Dodik has not given any further information.

Does Serbia risk the end of the European integration process?

There are not many states in Europe that have not aligned themselves with Brussels's position, condemning the Russian invasion and introducing sanctions against Moscow. Even neutral Switzerland announced  its measures against Russia yesterday. Only two countries are missing: Belarus, which has decided to actively participate in the conflict and against which the EU has already announced  new sanctions, and Serbia. Serbian President Aleksandar Vucic waited two days before speaking on the Russian invasion of Ukraine on Friday evening. "Undermining the territorial integrity of any country is a very bad thing", he said. But Serbia has “its vital interests and its traditional friends", and that is why it cannot impose sanctions against Moscow, explained the head of state.

Not only is Russia a long-time ally of Belgrade, but it is also an indispensable energy and diplomatic partner, a state that has always fought internationally against the recognition of independent Kosovo. In short, turning its back on Moscow could have a very high cost for Serbia. But there is also an aspect of internal politics: next 3 April, Serbia is called to the polls for the presidential, legislative, and administrative elections, and it is reasonable to say that the majority of Serbs are against sanctions (a 2021 survey  carried out in 2021 by the Institute for European Affairs in Belgrade claims that for 83% of Serbs Russia is a "friendly" country). Following Brussels by hitting Moscow could have caused an electoral defeat.

On the other hand, however, deserting Brussels will have repercussions. A couple of MEPs have already expressed their indignation at Vucic's choice and a senior European diplomat stationed in Belgrade told me over the phone that "this could be the end of the enlargement process to Serbia". However, not everyone thinks so. Serbian political scientist Srdan Cvijic, for example, states that "there have already been, in the past, situations in which Brussels could have interrupted the integration process, for example due to the worsening of the rule of law or freedom of expression, but did not". The game is therefore open and everything seems possible, also in light of the speed with which the European Union is changing its ten-year policies.

An acceleration of NATO in the Balkans?

Five countries of the Western Balkans are currently members of NATO: Slovenia (since 2004), Albania and Croatia (since 2009), Montenegro (2017), and North Macedonia (2020). These last two entries, in particular, were accompanied by controversy in the region and by grievances from Russia. However, Serbia, Bosnia and Herzegovina, and Kosovo remained outside the alliance. If in recent years NATO had shown signs of fatigue to the point that Emmanuel Macron spoke in 2019 of his "brain death" after the Russian attack on Ukraine, the Atlantic Alliance is back in fashion, even in the Balkans.

In Kosovo, for example, the government called  for the creation of a permanent NATO base and the start of an accelerated accession process (an initiative that Vucic regards as  "an idea of the American and European lobbies") on Sunday. As we know, however, five member countries of the European Union – Spain, Greece, Romania, Slovakia, and Cyprus, with the first four being also part of NATO – do not yet recognise the independence of Kosovo. It is therefore difficult to think that Prishtina's request will be granted. But again, many taboos are collapsing these days.

As for Bosnia and Herzegovina, on the other hand, the country has been negotiating its official entry since 2008, with the last update recorded in 2018, when the alliance approved the Membership Action Plan (MAP), the advanced monitoring phase that precedes membership. Milorad Dodik  is naturally opposed to the entry of Bosnia and Herzegovina into NATO, but on the other hand, the fear of a new conflict supported by Russia could push the EU and the United States to speed up the application for membership. NATO Secretary General Jens Stoltenberg himself mentioned Bosnia and Herzegovina in his Friday speech , assuring support for the country.

A new economic crisis awaiting us?

The latest development that we analyse is that linked to the sanctions imposed on the Russian Federation and the consequences that these could have in the Western Balkans. Let's start with a disclaimer: contrary to what one might think (especially if you read the pro-Russian press), the economic weight of Russia in the Balkans is not enormous, given that the first trading partners and major investors in the region are the European countries. However, the Russian presence affects some sectors in particular, such as hydrocarbons and banks, and the states are exposed in different ways. If "Russia exerts direct and indirect control over about 10 percent of the economy of Serbia, primarily in key sectors such as energy and banking", in Montenegro Russian foreign direct investments make up about 30% of GDP .

As for exports from the Balkans to Russia, these rarely make up more than 2% of the national GDP, while imports are mainly made up of hydrocarbons in all countries of the region. And this is where the Balkans are exposed to great risks, being highly dependent on Russian gas. This is also true for many member countries of the European Union, but in the region the percentages increase dramatically: if on average the EU imports about 40% of its gas  from Russia, North Macedonia and Bosnia and Herzegovina are completeley dependent  on Russian gas. Serbia supplies almost 90% of its needs through Russia, Croatia two thirds, and Slovenia a half. In addition, Russian energy giant Gazprom does not only sell gas, but also directly controls  petrol stations, storage facilities, and refineries.

Finally, the banking sector is the one in which the conflict seems to have the most immediate impact. The European branch of Sberbank is at risk of bankruptcy  and has capital for 13.6 billion Euros in Bosnia and Herzegovina, Croatia, Slovenia, and Serbia as well as in Austria, Germany, the Czech Republic, and Hungary. VTB, the second largest Russian bank, is also present in the Balkans. In Croatia, for example, the food group Agrokor (which became Fortenova after the recent restructuring), owner of the Konzum supermarkets and with over 50,000 employees, is in the hands of VTB and Sberbank. In short, without mentioning the interests in the real estate market (particularly important in Montenegro), Russia is financially present in the Balkans in some strategic sectors, which risk being shaken in the coming days. Indeed, the economic earthquake is underway. In Republika Srpska, the government has announced  the nationalisation of Sberbank, while queues at ATMs have already begun .

The Balkans hold their breath

The Balkans are one of the areas in which Putin's Russia has intervened most in opposition to the European Union and the United States in recent years. From the creation of a "Russian-Serbian humanitarian centre" in Nis in 2012 (a training centre which the EU called for closing) to the attempted coup denounced by Montenegro in 2016 and in which two Russian citizens were involved, passing through the protests in North Macedonia in 2018 in which a former Russian MP  was involved as a financier, in recent years there have been attempts by the Kremlin  to change the geopolitical framework of the Balkans. Concerns about further interference are therefore understandable, but much will depend on the outcome of the war in Ukraine. Will we move towards a withdrawal of Russian troops or, on the contrary, towards the complete occupation of the country? Will there be an escalation or will Putin be ousted from the Kremlin? As of now, the Balkans can only look with apprehension at what is happening a few hundred kilometres away.