Novruz is coming, spring is coming 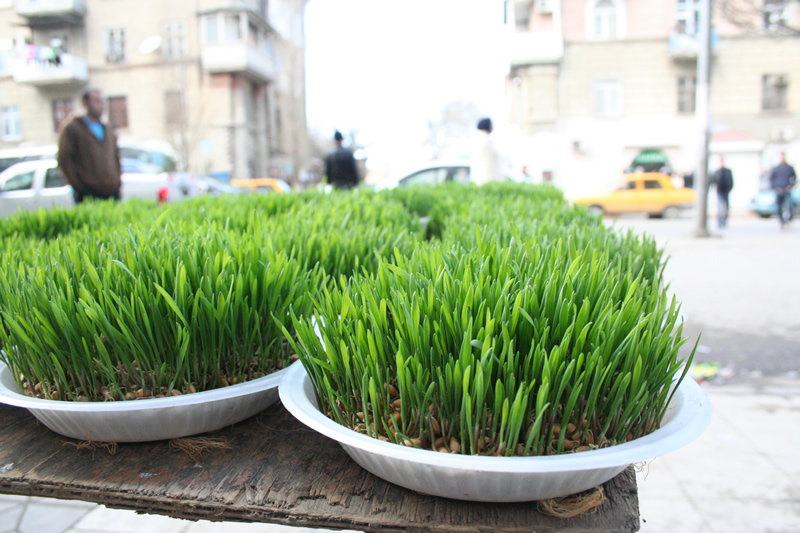 Novruz, a Zoroastrian holiday, marks the beginning of spring. Prohibited but celebrated discreetly in Soviet years, Novruz is now one of the most anticipated holidays in Azerbaijan
﻿

Marking the first day of spring and the beginning of a new year (according to the Persian calendar), Novruz (which means 'a new day') is one of Azerbaijan's most anticipated and colorful holidays. It is perhaps the equivalent of Christmas in terms of preparations, though minus the presents. Also unlike Christmas, Novruz is celebrated on 20-21 March, the day of the vernal equinox.

Every Tuesday night (Charshanba), small bonfires are prepared outside

Along with Azerbaijan, a significant number of other countries celebrate Novruz each year, including Iran, Afghanistan, and some parts of the Middle East, along with Tajikistan, Uzbekistan, Turkmenistan, Kazakhstan, and Kyrgyzstan. The holiday is also celebrated among Kurds, who call it Nuroj, which means literally 'new day' in Kurdish.

Novruz is also a popular holiday abroad. Every year, the holiday is celebrated in countries like Canada, Turkey, the US and the UK. Last year in Canada, for instance, thanks to the initiative of the Tebriz Ensemble and the Music House of Azerbaijan, an event was organized to celebrate the holiday in true spirit. I also came across the Houston-Baku Sister City Association, located in Houston, Texas. This non-profit citizen diplomacy network plans to organize a dinner with traditional Azerbaijani food and music to celebrate Novruz in Houston on 21 March. In fact, if you visit this website you will see a list of events all over the world that have been organized to celebrate Novruz.

In 2009, Novruz was added to the UNESCO list of the Intangible Cultural Heritage of Humanity and, in 2010, the United Nations General Assembly recognized 21 March as the “International Day of Novruz.”

A bit of history

While Novruz dates to ancient times, the holiday is strongly associated with Zoroastrianism. In fact, according to some historians, it was the Zoroaster himself who created this holiday. According to Wikipedia, which provides extensive information on Novruz, “the term Novruz, in writing, first appeared in Persian records in the second century AD, but it was also an important day during the time of the Achaemenids (c. 648- 330 BC), where kings from different nations under the Persian empire used to bring gifts to the emperor, also called King of Kings (Shahansha), of Persia on Novruz".

There are also many legends that tell the story of Novruz.

During the era of the Soviet Union, this holiday was prohibited in Azerbaijan and in other countries of the former Soviet Union that celebrated Novruz. My mother remembers how her family secretly painted eggs, prepared pastries and rice, and invited guests over. To replace Novruz, the Soviet rule introduced 1 January as New Year’s Day. While New Year's is still celebrated in Azerbaijan, Novruz is a custom that is cherished and celebrated by most Azerbaijanis. 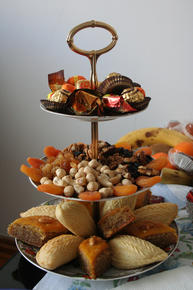 It all begins four weeks before the actual festivities. Every Tuesday night (Charshanba), small bonfires are prepared outside which everyone jumps over, expressing wishes for a good and happy year without grief or pain. In fact, on the last Tuesday, each family member is expected to jump over the fire. Each of the four Tuesdays is represented by its own symbol: the first one is water, the second is flame, the third is earth, and the fourth is wind. The water renews nature, refreshing it and preparing it for the new year. Fire signifies rebirth; earth signifies the revival of the earth; and wind represents the arrival of spring and the blossoming of trees.

According to another legend, God created a man out of soil and water. He then warmed him with his fiery breath, giving him warmth. Then he ordered the wind to wake him up. That is why all four elements are considered sacred, as they symbolize the main components of the Universe.

Apart from Tuesdays and bonfires, perhaps the most important symbol of this holiday is Semeni: the sprouts of wheat that every house must have. On the day of the festivities, a red ribbon is tied around the Semeni and candles are lit, one for each family member. Other traditions that characterize the festivities include painting colorful eggs (similar to Easter), baking delicious deserts such as pakhlava and shekerbura, and preparing a variety of national dishes.

For children, aside from bonfires, the most exciting part of the Novruz holiday is papaq atti, “throwing hats”. Children throw their empty hats onto their neighbors’ doorsteps and quickly hide to patiently wait for their treats. The owner of the house usually fills the hats with sweets, pastries, dried fruits, and sometimes little toys.

An accessory that every house must have for this holiday is a Khoncha: a three-story porcelain tray with pastries, dried fruits, nuts, and dyed eggs.

In the evening on 21 March, all family members gather at home for dinner to eat a traditional dish called plov (rice dish) and celebrate the Bayram (holiday). In some parts of the country where old customs prevail, on the last night of the old year, family members sprinkle water on each other, a custom symbolizing the “washing off” of all the hardships of the old year.