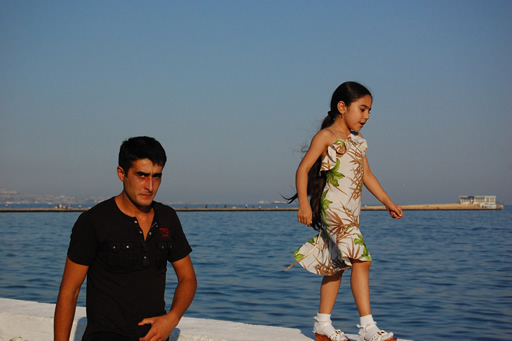 Once upon time in a Soviet sanatorium

I can’t remember how old I was exactly. It was summer holidays and we were going to a sanatorium with my family. Sanatoriums were Soviet-style resorts, either on the coast or in the mountains, that were located throughout the territory of the former Soviet Union. They were set up as combination health holiday facilities similar to what we today call spa resorts and offered some medical services. As we arrived at the gates, I turned around and already was excited by the view - we were right on the shores of the Caspian Sea, just an hour or so outside of town. I remember very well the Soviet-style rectangular gray construction block with a decorative pool in the yard. Inside the building, there was a funny smell. It felt damp and almost hospital-like, but perhaps it was the staff’s white robes that made me feel that way. My first impression was that we weren’t there on holiday but rather in a hospital where my parents were going to get a treatment.

Luckily, we were just there on holiday. I remember our room – there were three beds lined up against bare white walls and a small refrigerator in the corner with a coffee table standing next to it. It was all very simple. There were also “suite” rooms with two bedrooms, a small living room and a kitchen, but these were for the families of higher officials.

There was a big dining hall where food was served three times a day. It was all very strict and there was no way to get seconds. The biggest entertainment for many of the guests was the open-air theatre that showed old Soviet black and white movies on some nights, and of course the disco room.

Back in the day, such sanatoriums were popular holiday destinations for many Azerbaijani families, especially as it was not as easy to travel abroad as it is now. These “resorts” were split into three main categories: sanatoriums operated by and for families of high-ranking state officials; those for ordinary citizens and members of trade unions [profsoyuz] and resorts operated and administered by various state institutions, such as the Ministry of Defense or the Ministry of Internal Affairs.

Today, these sanatoriums still exist, but not all of them meet today's expectations for quality and comfort so there has been a major shift in holiday destinations and holiday choices for many Azerbaijanis.

What is popular vs. what is affordable?

Today, there are more opportunities and choices for holiday destinations. Popular stops include Turkey, Greece, Dubai and Georgia’s seaside resort city of Batumi. For what concerns traditional health tourism, spa towns of the Russian Caucasus like Kislovodsk and Yessentuki that feature naturally medicinal mineral springs are still very popular among an older generation of Azerbaijanis. Nowadays, these two destinations offer a range of holiday facilities from Soviet-style sanatoriums to independent dachas and cottage houses. It is not a cheap treat though. Together with transportation and accommodation, a potential visitor is looking at a minimum of 1000AZN (one Azeri Manat is about 0.9 Euro as of September, 2011) for a stay of 12 to 14 days, and possibly even more.

For less expensive health treatments than Kislovodsk or Yessentuki, Georgia offers some alternatives. Accessible by car, train and airplane, Georgia attracts crowds of Azerbaijani visitors and offers a range of holiday spots in the mountains, by the sea and in the friendly atmosphere of its capital Tbilisi. According to Georgian statistics, some 500,000 visitors arrived from Azerbaijan only last year and Georgian tourism officials counted 200,000 Azerbaijani tourists in just the first five months of 2011. The growing numbers are indicative of Georgia being a potential tourist destination, not only for its proximity but also for its affordable prices. In Georgia's seaside resort city of Batumi, it is possible to spend a relaxing week within a budget of 250AZN.

Another popular destination is Turkey with its many seaside resorts on the coasts of the Aegean, Mediterranean, Marmara and Black seas. It is more expensive than Georgia, but still cheaper than some domestic destinations in Azerbaijan. According to local resident Aysel A., one night in Azerbaijan’s trendy summer vacation spot Nabran, located on the Caspian seashore in the north of the country, starts from 40AZN and can go as high as 150AZN. A week-long holiday in Turkey, on the other hand, including tickets, can range from just 300 to 2.500AZN. Another young resident of Baku Vafa C. says she would prefer to spend her vacation abroad rather than in Azerbaijan, even though holiday resorts like Nabran are popular among her peers. She said her preference was due to relatively inadequate conditions and services or cleanliness at many of Azerbaijan's holiday resorts.

Among those that do offer high-end services, prices fall beyond the range of affordability for an average Azerbaijani family (the average salary in Azerbaijan is around 325 AZN). For instance, one of those places is Sheki Saray hotel in the beautiful northern mountainous region of Azerbaijan. Sheki offers above-average services and accommodation,but nightly prices start from 80AZN. In a historical hotel nearby, Kervansaray, prices are relatively lower, ranging from 20 to 30AZN, but there is no heating or air conditioning and bathroom and toilet facilities are rustic. In other holiday destinations across Azerbaijan, it is possible to pay a minimum of 10AZN (and usually not more than 50AZN) per night per person in a room that can accommodate four to six people. In some nearby villages, one can find rooms at a cheaper rate of 5AZN per person per night in a rented home.

Whether at home or abroad, going on a holiday remains a luxury for some Azerbaijani people and families living on minimum wage. The Soviet-style system of sanatoriums that catered to middle-class families have long lost their popularity, either as a result of rising prices there too or simply due to lack of available services. For now, it looks like Azerbaijanis will continue looking for more holiday options and destinations at home or abroad, perhaps discovering places beyond neighboring Russia, Georgia, and Turkey. Hopefully, it will only be a matter of time and investment before a better hospitality sector in Azerbaijan itself develops. It would probably attract more tourists, not only from abroad, but also from within the country.