Azerbaijan in the shadow of the hijab 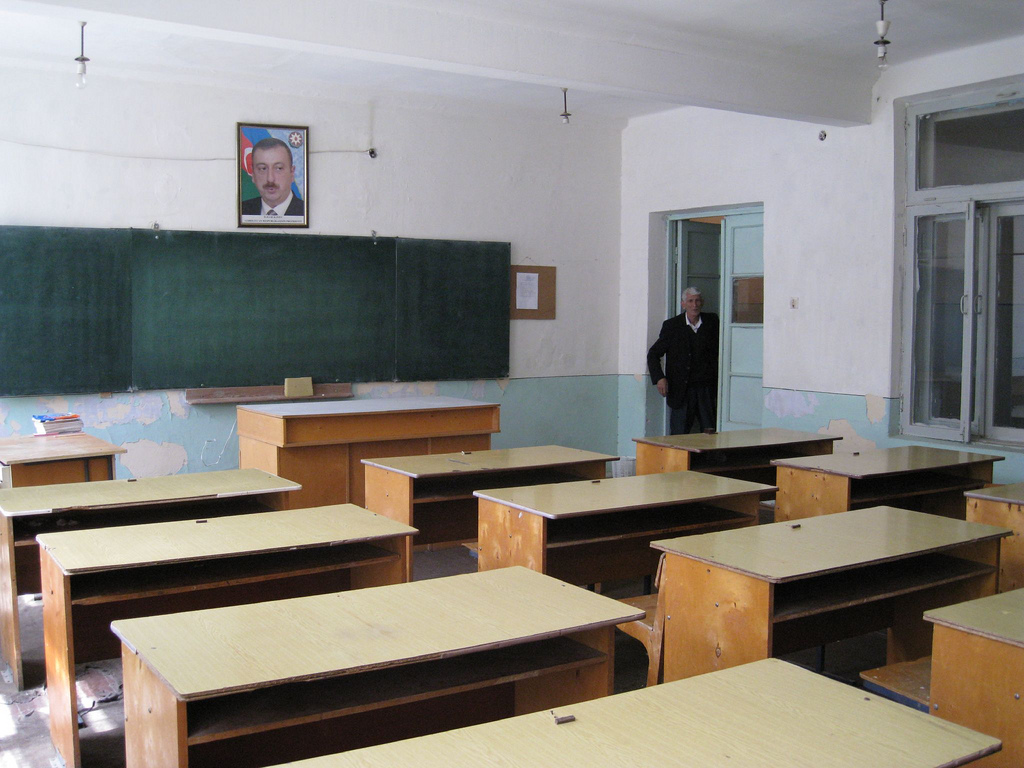 Azerbaijani authorities recently instituted an outright ban on headscarves which, according to officials, was already part of existing law. The leader of the unregistered Islamic Party of Azerbaijan, who vocally opposed the ban, has been arrested

On 10 December, the Minister of Education in Azerbaijan, Misir Mardanov, announced the introduction of a ban on headscarves in schools. While many have criticized this move, authorities claim that it is in line with the existing law on school uniforms. “The law […] clearly states that you have to go to school in a uniform and that all other forms of clothing are unacceptable”, the minister told a local news outlet, APA, dismissing claims that the ministry’s decision limits or restricts people’s freedom of religion.

Whether simply a matter of uniforms or something else entirely, the statement spurred heated debate across the country. The actual intentions behind the move have so far left many questions and unsatisfied parents, not to mention many young girls who must now face a choice: keeping their headscarf but leaving school, or the other way around.

The view from above

Despite mass protests in Baku and across the country (which also involved burning of the Minister of Education’s picture), the ministry is determined to stick to its decision given this is not the first time that the headscarves-in-school issue has appeared in Azerbaijan. Just a few years ago (in 2007) a high school student was suspended for a week for wearing a religious headscarf but was allowed to come back to school after protests in the country’s second largest city, Sumgayit.

In addition, officials at the Ministry of Education consider headscarves a violation of basic rights, especially if a student as young as six or seven is obliged to cover her head on parental orders. Comparing the hijab to honor, an idea chanted by many protestors during the protests, is also wrong according to pro-government political analyst Mubraiz Ahmedoglu. Ahmedoglu claimed in a press statement, “it is unethical to associate the concept of honor with the issue of schoolgirls wearing the hijab […] It makes uncovered women in Azerbaijan seem dishonest, does it not? […]”.

There are also fears that unless strict rules are introduced to curb the wearing of religious dress, including hijabs, in public schools, it will just be a matter of time before separate schools for boys and girls are introduced in Azerbaijan.

Iran, the view from the South

Theories speculating about the ministry’s decision abound widely and many government officials are convinced that the ruling can be connected to Iran and that country’s plans to increase its influence in Azerbaijan. In one of his statements, a former Azeri ambassador to Tehran, Aliyar Safarli, said he thinks, “Iran is trying to use Islam to increase its influence in Azerbaijan and does not miss a single chance to do so. I am fully convinced that Iran is stirring up this problem and provoking people into protesting the hijab ban”.

All of this is the result of the growing tensions between the state and the country’s devout Muslim population. Authorities’ previous attempts to tackle the issue of Islam and its influence in the country include opposing introduction of religious studies into the secondary school curriculum, strict control over registration procedures for any kind of religious institutions, and several mosque closures over the last two or three years. The government’s firm grip is visible when it comes to regulation of the loudness of calls to prayer, the dissemination of religious literature, and treatment of religious figures - there have been several cases when local police were involved in beating and forced shaving of beards of some local men.

On 7 January, the leader of the unregistered Islamic Party of Azerbaijan (IPA), Movsum Samedov, was arrested shortly after he harshly criticized the introduction of the ban on the hijab. A few days later, the police declared they had found arms and ammunition in Samedov’s and two of his relative’s houses and accused him of terrorism. Members of the Islamic Party of Azerbaijan believe their leader was arrested because of his outspoken criticism of the headscarf ban. Leyla Yunus, director of the Institute for Peace and Democracy, also condemns Samedov’ arrest and considers it “suppression of freedom of speech and freedom of thought and nonconformity”.

In the meantime in Iran, the senior cleric Grand Ayatollah Jafar Sobhani sent a message to the Azerbaijani President saying that the Azerbaijani authorities’ recent approval of the headscarf ban goes against the “divine law”, calling it “anti- Islamic”. In response, the Ministry of Education claimed that it was simply trying to “secure respect for the laws of Azerbaijan”, stressing that in no way did recent decisions target notions of Islam.

The view from below

Similar to Leyla Yunus, lawyer Intiqam Aliyev sees the ban as “illegal” and aimed only at distracting the public from real problems like corruption and living conditions. Others like Aynur Jafar, a young female lawyer living and working in Azerbaijan, sees the ban as “wrong from all legal, political, and moral points of view” especially since Azerbaijan’s Constitution “gives everyone the right to religion”. Not to mention, says Jafar, Azerbaijan “ratified the European Convention on Human Rights and article nine of the convention gives us […] the right to practice our beliefs”.

Another female resident and professional from Baku, Nurlana Jalil, says that while she is completely against “a school girl being forced to wear a hijab”, she also considers it wrong to force those who are already covered to immediately uncover. “Perhaps the Ministry of Education should come to an agreement with appropriate religious institutions before deciding on fragile issues like this”.

Aysel Aghayeva, another young professional from Baku says “there is an overall tendency of turning to religion in the country simply because, unlike religion, the government fails to inspire public trust”.

If the matter is only discussed in terms of Iran, anti-government religious forces within the country, or the government’s way of showing the world how it is tackling religious issues and striving for secularism, the main issue remains unaddressed: forced suppression of religious freedoms are not likely to have any positive outcomes. What is likely, however, is that some girls will drop out of school, religious anti-government rhetoric will strengthen, and the government will continue using its own ways to tackle the issue. The arrest of a local leader of the Islamic Party is a case in point.