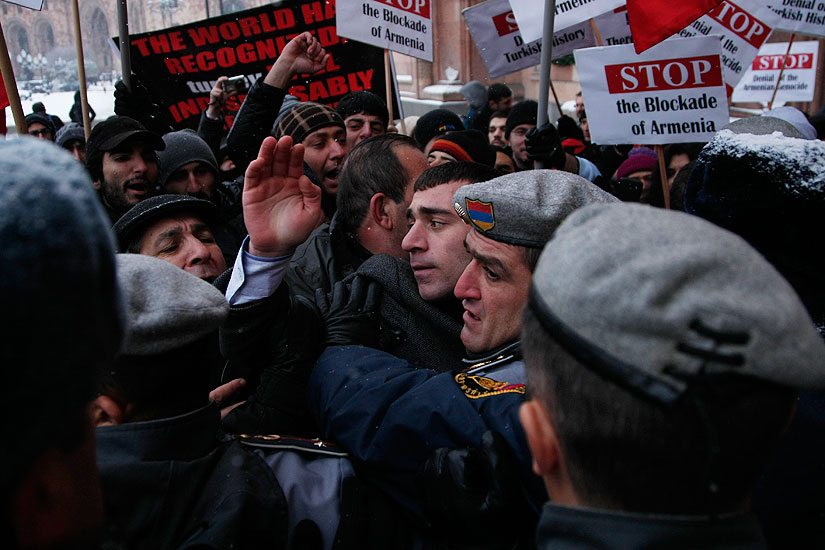 Seven years after Hrant Dink’s tragic death in Istanbul, his dream of an Armenian-Turkish reconciliation seems as distant as ever

On January 19 thousands of people marched in the streets of Istanbul, holding signs in Turkish and Armenian, in commemoration of the 7th anniversary of the tragic death of the journalist Hrant Dink. It may be a sign of changing times in Turkey that thousands of people took to the streets in memory of an ethnic Armenian journalist. However, the dream that was so dear to Hrant Dink, the reconciliation between Armenia and Turkey, seems today almost as remote as it had been before his murder.

Currently, says Artak Ayunts, a conflict resolution expert from Yerevan, on the official level the relations between the two countries are at the lowest point since 2007. Signs are abundant that Armenia and Turkey are drifting even further apart than they were (if that is possible). Even though the Armenian-Turkish protocols signed in 2009 have not been formally discarded, neither side has ratified them and it is impossible to imagine that they will be ratified in the foreseeable future. Neither the much publicized visit of Turkish foreign minister to Yerevan, when he took part in the Black Sea Economic Cooperation meeting on December 12 2013, nor the communication between Davutoglu and Nalbandyan at OSCE meeting in Kiev several days earlier, have lead to any significant outcomes.

After the meeting between Davutoglu and Nalbandyan in Yerevan, instead of holding a joint press conference, Davutogly gave a press conference to Turkish journalists, while Armenian Ministry of Foreign Affairs issued a statement. Apart from general thoughts, neither side expressed any new ideas. Some attention was drawn to Davutoglu’s remarks, quoted by Turkish newspapers: he acknowledged that what happened to Armenians in 1915 was “completely wrong” and “inhumane”. 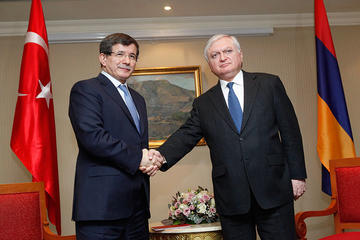 However, this hardly can be interpreted as willingness to go beyond Ankara’s traditional position, since Davutoglu immediately added that Armenia in its turn should be ready to acknowledge the suffering that Turks have been through during these events. In other words, Davutoglu was largely reproducing the traditional Turkish view, according to which what happened in 1915 was not a genocide organized by the Turkish state, but rather series of ethnic clashes, of which both Armenians and Turks suffered.

End of the football diplomacy in Armenia

Armenia has emerged disillusioned from the so called “football diplomacy”. Signing protocols had been a bold step for Armenia’s president Serzh Sargsyan, who received a lot of criticism for it. One of the ruling coalition parties, Dashnaktsutyun, even left the coalition because of the protocols. The reaction of the Diaspora was furious, and arguably Sargsyan’s government has never been able to recover its standing among Diaspora communities (of course, the Armenian-Turkish deal was not the only cause for this, allegations of corruption and election fraud also played their part).

There are signs of hardening of the Armenian position, such as the suggestion by one of the members of the cabinet that the Republic of Armenia should be renamed into Republic of Eastern Armenia (which implies a territorial claim to Turkey). Though the suggestion was not taken seriously and was criticized even by some members of the ruling party, it is a clear sign of how unhappy the Armenian government is with the current state of Armenia-Turkey relations.

Attitudes of the Armenian society, which had begun to change during the times of football diplomacy, are also hardening. The way a relatively minor incident was covered in Armenian media showed that the Armenian public is also disappointed in the idea of Armenian-Turkish rapprochement. Hasan Oktay, a Turkish political analyst, who has often visited Armenia, and, as it turned out, has nationalist political views, posted on his Facebook profile photos of himself holding the Turkish nationalist “grey wolves” salute in Yerevan’s central square. This does not seem like a major cause for scandal, but Oktay’s Facebook profile also featured his photos posing with Armenia’s prime-minister, Tigran Sargsyan, and even with the Catholicos of all Armenians, Garegin I. Newspapers and social networks harshly criticized the prime-minister and the Catholicos, for meeting a Turkish radical nationalist.

Turkey and the 2015 anniversary

As for Turkey, here the Armenian issue is hardly one of the priorities for politicians, while the civil war in Syria and the corruption scandal continue to occupy the headlines of the newspapers. However, one thing forces the Turkish government to draw attention to the Armenian issue: next year, in 2015, it will be the 100th anniversary of the extermination of Armenians in the Ottoman Empire. The 100th anniversary of the Armenian genocide is a date of major symbolic significance, and the Armenian Diaspora communities are getting ready for a forceful campaign aimed at genocide recognition.

The Turkish government may use two possible strategies of countering the negative effects of the genocide anniversary, says historian Tigran Zakaryan. One is to continue to do what Turkey has done for decades, responding to Armenian Diaspora’s awareness campaign with its own lobbying and counter-propaganda. Another possible strategy is acknowledging certain facts of violence against the Armenians, and even expressing regret for certain episodes, in order to show that Turkey has come to terms with its past, without however accepting that the killings of 1915 constituted a genocide.

Probably, says Zakaryan, Turkish policies will combine elements of both strategies. However, apart from the external challenge presented by Armenian Diaspora, the Turkish government will also have to deal with the increasingly skeptic attitude of various groups within the Turkish society toward the officially accepted narrative of history.

In any case, the issue of genocide recognition is likely to cause a lot of headache for the Turkish government until April 2015.