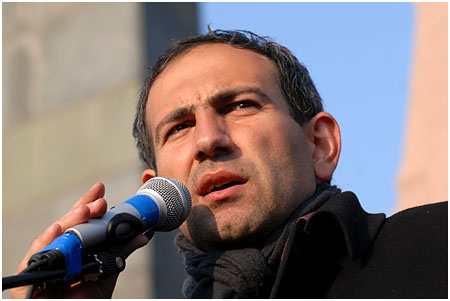 When Armenian police dispersed an opposition sit-in on Yerevan's Liberty Square in the early hours of 1 March 2008 following a bitterly disputed presidential election a little over a week before, supporters of former president Levon Ter-Petrosyan regrouped later in the day close to the French Embassy in the center of the capital. But, with Ter-Petrosyan under effective house arrest, other opposition figures had to lead the protest. One of the main figureheads that day was Nikol Pashinyan, the 34-year-old opposition newspaper editor best known for his trademark firebrand anti-government political rhetoric.

Before the day ended with bloody clashes with police and other internal security services that eventually left 10 dead, Pashinyan was clearly visible, armed with a megaphone, directing the organization of barricades of captured buses blocking roads leading to what would turn out to be the opposition's last stand after over a week of street protests calling for a re-run of the vote. According to official results from the Central Election Commission (CEC), Ter-Petrosyan came in second to the now incumbent, Serge Sargsyan in a first round of the February election. Many independent observers, however, believe a second round should have been called.

Following the chaos that ensued, Pashinyan, like many other senior opposition figures, went into hiding and didn't emerge until July earlier this year. Police put him on a list of Armenia's most-wanted, but failed to locate him let alone arrest the fugitive editor. Meanwhile, Pashinyan published many articles and diatribes against the government in opposition newspapers or distributed in the true spirit of samizdat online via blogs. Although the radical activist, who had openly espoused revolution as the only way to remove the president from power, had made previous promises to materialize in public, few expected him to actually do so.

However, on 1 July 2009, Pashinyan surprised many by turning up at the Prosecutor-General's office in Yerevan. A statement posted on his website a week earlier stated that he would do so to become a "political prisoner" following the announcement of a general amnesty in connection with the 1 March 2008 disorder by the authorities the same month. "They will arrest and I will be remanded in custody," he nevertheless told journalists covering his unexpected return. "They will then sentence me to as many years in prison as possible and I will continue my struggle in prison."

Pashinyan eventually went on trial on 20 October accused of organizing the disturbances, provoking mass riots and defying representatives of state authority. Dozens of opposition supporters gathered outside the courthouse ringed by scores of riot police. The charges carry between four and ten years imprisonment if Pashinyan is found guilty. His lawyer, Lusine Sahakyan, demanded that the judge, Mnatsakan Martirosian, be replaced given his earlier controversial handling of other cases against opposition supporters and activists. The prosecution objected while journalists were only allowed to follow proceedings from monitors placed in another room.

On 30 October, however, Pashinyan surprised observers again in a surprise announcement that he would contest a parliamentary seat vacated by another opposition colleague, tycoon MP Khachatur Sukiasyan, in protest at the lifting of the immunity from prosecution of other deputies supporting Ter-Petrosyan. The Armenian National Congress (ANC) voiced support for the bid even though it had previously announced it would boycott the three parliamentary seats left vacant by its members stripped of their mandates. "We find any presence in that National Assembly meaningless," ANC central office coordinator Levon Zurabyan said at the time.

But, in a shock announcement, Pashinyan's candidacy was initially rejected in early November. Under Armenian law, only citizens permanently residing in the country for at least five years can run for parliament. However, despite his obvious presence in Yerevan throughout the February 2008 presidential election, and especially on 1 March, Armenia's Department of Passports and Visas (OVIR) declared Pashinyan to have been absent from the country from February last year until July 2009. Pashinyan Lawyer Sahakyan called the ruling "illegal and illogical" while OVIR eventually acknowledged the error soon afterwards.

Appealing against the decision, Sahakyan argued that as her client had never been charged with illegally crossing Armenia's borders, the police had not proven that Pashinyan was absent. Countless photographs of the newspaper editor at opposition rallies and marches in the week before 1 March accompanied newspaper reports on the OVIR decision. The police, however, argued that during his period on the run, Pashinyan had been writing that was traveling the world on a fake Serbian passport. His response was that such reports were "a piece of literally fiction" intended to obscure his real whereabouts.

Few expected, however, that OVIR's earlier decision would be overturned, but in yet another surprise turn of events, the court ruled in Pashinyan's favor. "To be honest, I have long ceased to expect legitimate verdicts in the Republic of Armenia," Sahakyan was quoted by the Armenian media as saying. Nevertheless, Pashinyan will contest the vote slated for 10 January 2010 in what might turn out to be another attempt by the country's extra-parliamentary opposition in ushering in a new phase of activity. Paradoxically, however, the ANC had days earlier stated its willingness to cooperate with the authorities if "democratic freedoms in the country" are restored.

In a statement released by the ANC on 11 November, Ter-Petrosyan attacked nationalist forces in the country for their position on Armenia-Turkey rapprochement. "We will therefore not join in the "nationalist hysteria" sparked by the October 10 signing of two Turkish-Armenian protocols that envisage the establishment of diplomatic relations and the reopening of the border between the two states," the former first president stated. However, he added, the current president should seek to find legitimacy at home rather than from foreign government and international bodies abroad.

It is likely that the extra-parliamentary opposition will see the coming parliamentary vote as the first test to determine whether such a resolve from the authorities exists.