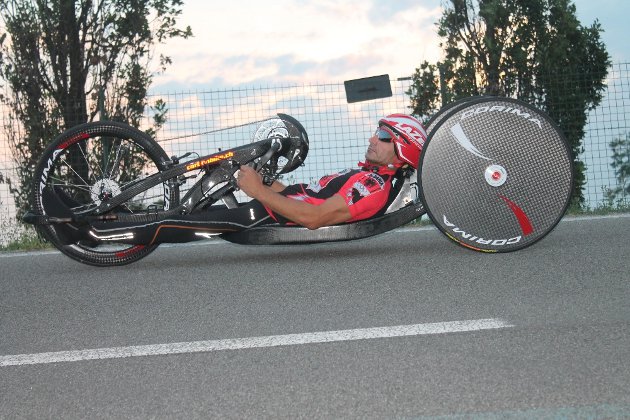 Haki Doku is the first Albanian athlete in the history of the Paralympics. He competed in London on his hand-bike, a special, three-wheeled bike driven by force of arms. The road to get there was an uphill struggle, but thanks to the Integra Foundation and many others, Haki's dream was fulfilled

Three wheels and the force of arms. To fly his hand-bike and run in the London Paralympics. It was the dream of Haki Doku, 43, disabled Albanian citizen. But dreams sometimes do come true. Doku is the first athlete in the Land of the Eagles to compete in the Paralympic Games. On the opening of the Games on August 29th, Haki made its entry into the arena with the Albanian flag given to him two days before in Tirana by the President of the Republic, Bujar Nishani. As a demonstration of the exceptional nature of the event, in Tirana he was also accompanied by Roberto Rancilio, a famous name in the hand-cycling world, current president of the European Hand-cycling Federation , and representative of the sports group Rancilio Parabiago Haki is part of.

Haki Doku was 27 and worked informally in Italy at a construction site. He fell from a scaffold and hurt the spinal cord. He became a paraplegic. Following several months of rehabilitation, he learned to move on a wheelchair. But this did not end his passion for sports. He learned cross-country skiing on a specially built sleigh, and then hand-biking – riding on a bicycle with three wheels, one front and two rear, where the athlete is lying back on a bench, his legs secured to the two supports. The wheels are moving under the thrust of the arms, thanks to the gears that take the place of the pedals.

Participation in competitive sport requires, however, high costs for both the lightweight equipment and travelling. Here comes the Integra non-profit organization, founded in Lecce in 2003, that works in the field of migration policies with highly skilled and versatile professionals. The association was founded by Klodiana Cuka, project designer of Albanian origin, with the involvement of various foreign communities in Italy.

President Čuka, was contacted by a friend of the athlete. "Two years ago, during an initiative in Rome, I was approached by Bjanku Ferdinand, Albanian photographer living in Italy. He said – you at Integra always succeed in difficult business, you should help Haki Doku". Klodiana learns about Haki's dream and problems: "He needed 7,000 Euros to buy a lightweight hand-bike for international competitions in London 2012, and sponsors for travelling around the world".

The problems were both economic and political, then. “Paul Buralli, of the Integra office in Milan, immediately set to work to find a solution. It was not a trivial matter. Albania had never applied for registration to the International Paralympic Committee and did not seem interested in doing so. Even if Doku had qualified for London, he would not have been able to go". Despite living in Italy for 15 years, he did not have Italian citizenship.

"Haki is a strong, sensitive man. This must be what led us to achieve the goal", continues Klodiana. "In 2010, during an initiative in some schools in Milan, my colleague Buralli introduced me to Umberto De Matteis...this was the breakthrough encounter". De Matteis is vice president of the “Parliament of legality” study centre.

De Matteis decided to finance the purchase of a professional hand-bike and the travelling. In 2011, Haki achieved very good results and won medals in Slovakia and Serbia. "Transfers are expensive, he even competed in Africa, where he qualified for London last December". And the inscription of Albania to the Paralympic Committee? "That was a parallel problem, that many of us addressed while Haki competed – plus dozens of people and institutions including a network of Albanian journalists, the Embassy of the United Kingdom in Tirana, the Albanian Olympic Committee, and many others".

The pressure worked. Haki declared on Albanianews last November: "This is a great opportunity to integrate people with disabilities in Albania, helping them out of isolation, and inviting them to enjoy sports. Playing sports in the Paralympic world is not about winning and earning money, but challenging ourselves and feeling equal to others". On the eve of the Paralympic Games, Klodiana Cuka said: "This story confirms that unity is strength, and that the enthusiasm and confidence, along with hope, break down every wall, every obstacle and every border so that a dream can be fulfilled in the name of solidarity".

With his story, Haki Doku demonstrates that we can remain united in diversity. From 5th to 8th September, he ran on the tracks of the London Cycling Road, side by side with great athletes like Italian Vittorio Podesta, gold medal at the World Championships 2012.