Albania: Operation Alba and the memories of Romano Prodi 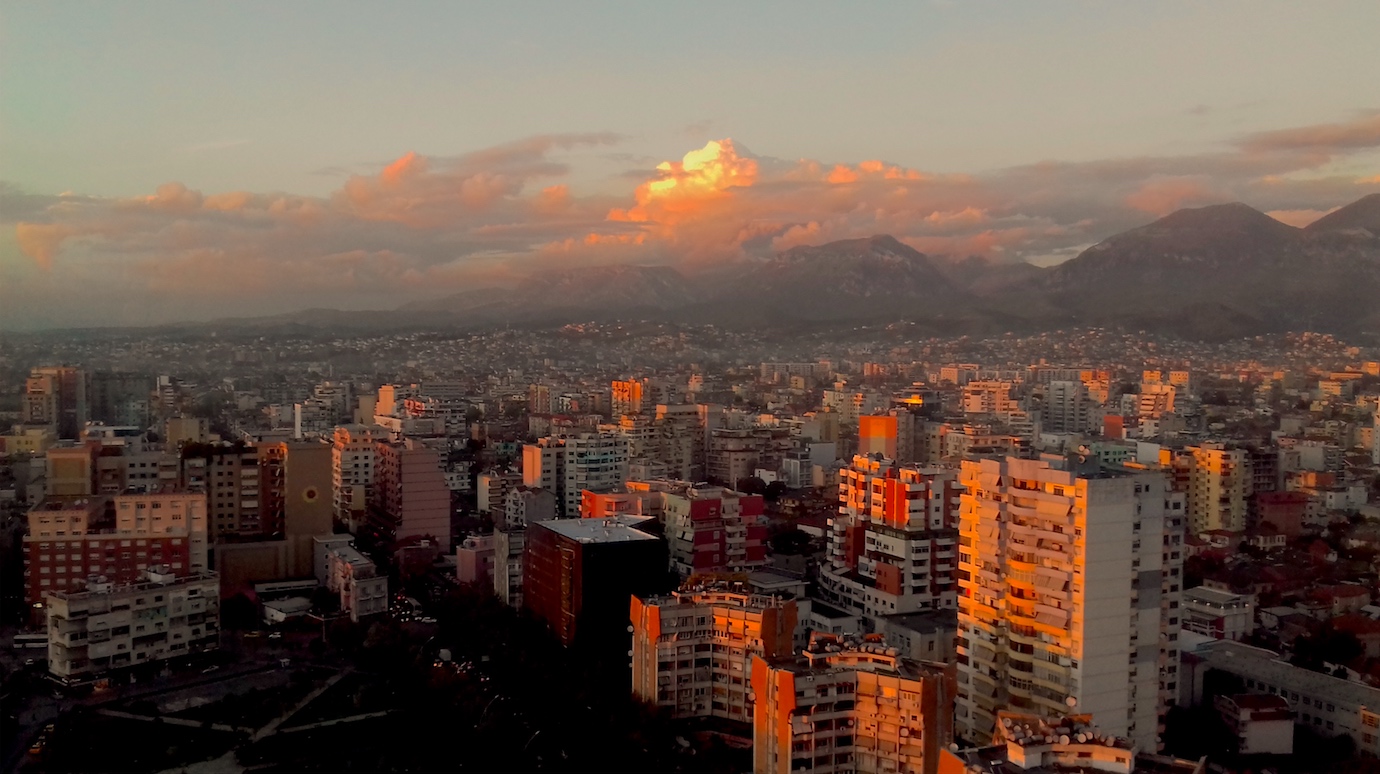 Tirana seen from the top floor of the Plaza Hotel - Ph. Nicola Pedrazzi

The Albanian civil war of 1997 was ended by an Italian-led international contingent. Twenty years after Operation Alba, the Prime Minister who promoted it has returned to the Land of the Eagles. An interview

What role did the international community play in Albania's democratic transition? This was the key question at the heart of the international conference organised last December 6th in Tirana by the Organisation for Security and Cooperation in Europe (OSCE), that celebrated the twentieth anniversary of the end of the civil war and the opening of the Osce mission in the country. The guest of honour was Romano Prodi who, as Prime Minister, at the height of the so-called "Albanian anarchy", put Italy in charge of an international mission authorised by the UN , sending 3,000 soldiers over the Adriatic. We interviewed him on his return to Bologna.

Professor, today everyone celebrates Operation Alba as an Italian success. But let's go back to 1997: in January, the pyramidal financial schemes crumbled and thousands of Albanian families lost their savings; in March, armories were taken over by ordinary citizens and criminal gangs, the south of the country was out of control, and President Berisha declared the state of emergency. On March 28th, 16 days before your government launched the mission, in the Strait of Otranto, a corvette of the Italian coastguard rammed the Katër i Radës , a wreck loaded with refugees fleeing Albania – over 80 people died, including women and children. Operation Alba was a flash-success if seen with hindsight, but at the time the context was dramatic...

I personally attended the funerals of the victims of the Katër i Radës, to express our closeness to the Albanians and make it clear that it had been a terrible accident. I remember a huge crowd, a huge pain. I keep a harrowing memory of that day, but as a representative of Italy it was right and responsible to be in Tirana; I believe that the Albanians understood it, because I did not feel resentment. As for the Italian intervention, the specificity of the mission was that it was fast – it lasted from April to August – and it was completed just on schedule. I remember the great satisfaction of Jacques Chirac, who told me that in his life he had never seen an international mission end on schedule. We had agreed a deadline with the United Nations and the international community, but I have to say that there was some doubt as to whether Italy would be able to carry out a mission of this kind. Initially, the path was not easy precisely because our partners tended to pull back – many countries were just not interested in Albania. The French gave a significant contribution, with the others I must say that it was a struggle. I would say that the multinational mission was possible thanks to the Italian-French cooperation.

There were political issues at home too. The far left, Rifondazione Comunista, opposed the mission and threatened a crisis of government; support was sought from the right wing, but the migratory question and the tragedy of the Katër i Radës were particularly instrumentalised.

When making decisions, confrontation and political conflict are inevitable. But even then, it was clear to everyone that there was no misunderstanding on the part of the government: the mission was a contingent aid, at a time of emergency, which was known to be necessary for the material and political future of Albania, and at the same time in the interest of Italy. And so it was: we managed to avoid the prolongation of an actual civil war and, even from the logistical point of view, the mission was exemplary – there were no clashes or injuries. Italy was effective because it was aware of its responsibilities in the Mediterranean, as happened later, with the Lebanese mission. In my opinion, also the Leonte operation has saved and guaranteed peace in a very delicate area of our sea. The difference is that this mission has not ended yet.

On April 14th, 1997, the day after the launch of Operation Alba, you went to Albania. But you chose to land by helicopter in Vlora, the capital of the south in revolt, and only afterwards you went to Tirana, to talk with Sali Berisha. Given the conditions of the country, didn't this decision raise military perplexities?

Many. Yet, despite the helicopters and the protection logistics, mine was not a military expedition, it was a political visit. The visit of a government that had a precise strategy to support Albania, also in Italy's interest. To be sure, there was tension in the air. To give a speech in Vlora, outdoors, in front of a square full of people , some of them armed... I remember that UN secretary Kofi Annan told my wife: "Your husband has had a lion's courage". Well, it was not courage, maybe recklessness, but in the service and awareness of the political moment. I have never met only the leaders of one party. For me, this rule still applies today. Last week in Tirana I met the President of the Republic Ilir Meta, I met Bashkim Fino and other socialist figures, and I met Sali Berisha and other opposition figures. Prime Minister Rama was in Brussels, but I wanted to meet both the left and the right anyway, as I consider it fundamental to respect a country's domestic politics – especially if your goal is pacification. I must say that, both yesterday and today, not all allies do the same.

What was the political climate like in 1997? Did you have different conversations with socialist Fino in Vlora and with democrat Berisha in Tirana?

In such dramatic situations, you don't make political plans. You give warnings, you appeal to reason, you try to convey the sense of the emergency, to make sure that your interlocutors know that they are not alone, that there is an international community that looks at them, respects them, and which they belong in, you agree on the minimum intent... At that juncture my government was interested in reaching a general agreement in the country in order to start the mission. The goal was to build a different future for the Albanians, on this goal there could be no difference in the relations with political sides. The drama was so obvious, the evidence of the facts called to responsibility.

Time, in my opinion combined with strategic negligence, has weakened Italy's relevance in Albania. What do you think of current bilateral relations?

Italy's direct responsibility was supported by actions after 1997: investments, serious political relations, and – I have to say – no invasive attitude, like other countries would have had. When, in summer 1997, there were the political elections, I forbade any Italian politician to do electoral campaign in Albania, as I wanted to avoid interfering in the country's political life. On this basis of respect and non-interference, we have created a very strong relationship of friendship and shared interests, with significant investment flows and trade. Of course, over the years, the Italian influence – or rather attention, as I do not like the word "influence" – on Albania has been gradually loosened up. I speak first of all of political attention, as the economic relations remain. Last week in Tirana, I reiterated that we must hasten the process of rapprochement with the European Union: a process that unites all the countries of the Western Balkans and which is bigger than the single bilateral relations. The debate on the borders of today's Europe is simpler than it was when I led the Commission, because the Turkish agenda has been postponed, if not completely erased. It can be a more serene and peaceful debate, which sees enlargement to the Western Balkans as its natural strategic outlet. Italy's task is to facilitate the journey of its Balkan partners towards the EU.

In recent years, Erdoğan's Turkey has radically changed its foreign policy and, also in Albania, it proposes itself as a power alternative to Europe. While you were in Tirana, Albanian Prime Minister Edi Rama said that, if European politicians slow down on enlargement, Turkey, Russia, and China will be able to offer better prospects to the countries of the area.

The Balkans can certainly look to the East, but I do not think it would be convenient for them. Good relations with Turkey are fine for everyone, but a Turkish-Albanian political union looks like a bit of a dream to me. Relations with China are also important and positive, but within certain limits – they must not divide Europe. Rama's statements would be news if they were actively followed up on. But I do not see realistic non-European scenarios for Albania, nor do I believe that the Albanian citizens see them. That said, of course, Turkey is a great country and has a huge influence in Albania, that it also exerts through religion – a tool that should be used very carefully, as religion as an identifying factor can become a divisive element and escape from our hands. But I think Albania is an European country and I think that Albanians consider themselves Europeans, period. On the long-term objectives, I think there is clarity. The rest are small things...

Twenty years later, events get historicised. What is your memory of the leaders of that time? What did you say to Fino and Berisha?

Nothing, like twenty years ago we talked about the future. Today's economy, the expansion of the city of Tirana, the needs of the Albanians. We did not speak for one minute about Operation Alba. It is certainly a pleasure for me to return to the country and see the changes. Compared to twenty years ago it is another world, and having helped to create another world is a source of satisfaction. I am always happy to return to Albania; I have come back several times, to give lectures at the university, but also as a simple tourist. Seeing all those young students is uplifting. Then, we know very well that problems exist. But I would say that a radical change has happened and is visible.