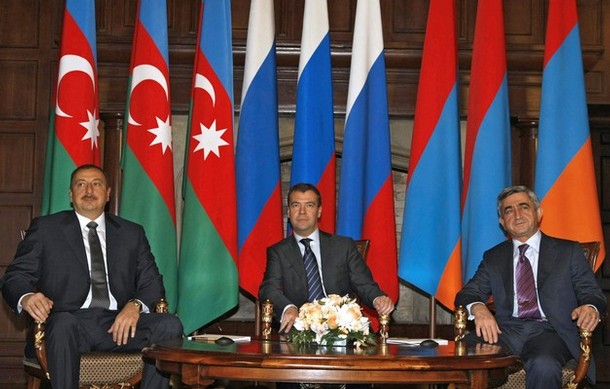 November was rich with events, which might have signaled important dynamics in the region, but closer analysis suggests that the effect of the recent geopolitical events on the "status quo" is rather limited

On the 2nd of November Presidents of Armenia and Azerbaijan - Serj Sarkisian and Ilham Aliyev with the mediation of the Russian President A. Medvedev signed the Declaration of Azerbaijan, Armenia and Russia on the Nagorno Karabagh Conflict. The event was praised by the US officials and the co-chairmen of the Minsk Group of OSCE. Mathew Bryza, the American co-chairman of the Minsk Group said that Moscow Declaration signed by heads of Azerbaijan, Armenia and Russia will help to solve Karabakh problem.

The conflict started as early as 1988 with the irredentist claims in the Azerbaijan's region of Nagorno Karabagh, where around 3/4 of population constituted Armenians. It further escalated into the war between independent Azerbaijan and Armenia in 1991 , which ended by the ceasefire agreement signed in Bishkek ( Kirgizistan) in 1994, leaving Azerbaijan with 7 regions, besides Nagorno - Karabagh, occupied by the Armenian forces. Since then, the status quo has been lasting, although hardly a day passed without shelling. The unique characteristic of the Armenia-Azerbaijan conflict was that the ceasefire has been supported for 14 years without peacekeeping forces, while at the same time did not transform into a serious progress in the resolution of the conflict within the framework of Minsk Group of OSCE.

The Declaration was the first since the ceasefire agreement in 1994 to be signed at the highest level - by two Presidents, that raised hopes for long awaited positive dynamics in the protracted conflict. It expressed willingness and readiness of the two presidents to continue the peace process within the existing format of the OSCE Minsk Group ( with three co-chairmen - USA, France and Russia), based on the Madrid proposals and " norm and principles of the international law, and the documents and decisions, adopted on their basis". The declaration however was met with strong criticism in both Armenia and Azerbaijan.

The effect of the Georgia- Russia crisis

The meaning of the Declaration should be understood in the context of the recent Georgia- Russia conflict. The Russia Georgia conflict intensified interests of the regional and extra-regional actors in the security situation of the Caucasus. For Europe and the USA it meant fragility and threat emanating from the " frozen" conflicts and urged them to strengthen attention to the potential sources of instability. For Azerbaijan it was a realization of the suspicion that Russia will not allow a serious change of the power balance in the region, which visibly reduced the war rhetoric in the official Azerbaijan's statements.

The intensified diplomatic activities developed after the conflict created an impression of the emerging competition over the resolution of Armenia Azerbaijani conflict. In fact, it seemed to be the lack of competition in conflict resolution attempts during all these years, which preserved the status "no peace, no war" within the Minsk process creating an impression of "no progress". The post 7th of August situation created a " window of opportunity" due to the heightened interest of the West, and Russia's interest to achieve certain progress in peacemaking "to neutralize" effect from military involvement in South Ossetia.

The military response of Russia to the attempt of Tbilisi to establish control of the breakaway region of South Ossetia has alarmed regional and extra regional actors. Observers predicted serious influence of these events on the whole security situation, including the other major conflict - over Nagorno Karabagh, along with the energy transportation projects. Some even anticipated change of the format of the Minsk group assuming unacceptability of further participation of Russia in the peace process. However, following the Georgian events Russia hurried to announce her devotion to the peace process in case of Nagorno - Karabagh conflict. In the aftermath of the conflict with Georgia Russia needed to rehabilitate before the West her image of the peace maker in the region. In regards of local actors, such as states in conflict Armenia and Azerbaijan- she needed to take advantage of the momentum, created after her demonstration of force, aimed at assertion of who was the true "master" of the region. Both states indeed were quick to help Russia to save the face. The Foreign Minister of Russia Sergei Lavrov called the declaration " a big step forward".

The Impact is Limited

The deeper meaning of the declaration, however, is that there is little hope that the status quo is coming to an end. While during the short period of time which followed the Georgia-Russian crisis, there was a hint on competition of the mediators - the West and Russia, the latter for some time being driven by genuine interest of making some progress in conflict resolution, the Declaration signaled devotion of all parties to the continuation of the process, which so far did not lead to major breakthrough in the negotiation process. In fact, the joint activities of three co-chairmen was a big achievement in the 90s for the first stage of conflict resolution, as allowed to bring together clashing powers' interests in one institutional framework. This helped to preserve stability and status quo for more than a decade. The consensus within the group however did not contain sufficient incentive to move forward. Russia was not interested in resolution of the conflict due to the possible loss of influence, which would come with resolution. Neither continued "status quo" has represented until recently a significant obstacle for the realization of the major Western energy interests in the region.

Thus the major message of all the participants of signing and those who praised it is that the peace process in Nagorno Karabagh conflict was not affected by the Georgia-Russia conflict and will continue to develop along the same route.

Given that none of the parties are perceived as ready to compromise, or Russia - to resolve the conflict, the declaration caused predominantly skeptical assessment both in Azerbaijan and Armenia from the side of the independent analysts. By opinion of former Foreign Minister of Armenia Vardan Oskanian, as it becomes clear from declaration : "...the positions of two sides are not getting closer, but in contrary- the contradictions are becoming deeper". Similarly, Azerbaijani expert Rasim Musabekov assessed the declaration as the document which does not contain specific actions and does not oblige the parties to anything.

The Moscow Declaration is a good news and a bad news at the same time. On the one hand, it confirmed the commitment of Armenia, Azerbaijan and Russia to the peaceful way of resolution of Nagorno Karabagh conflict. On the other-the very same document confirmed their preference of the current framework of conflict resolution, which so far did not lead to the major breakthrough. Taken into account lack of change in the domestic politics in both states as a result of presidential elections, the probability of compromises is low.

In addition, further initiatives of Russia on implementation of Declaration will serve the best test on whether her incentive to resolve the 20 year old conflict in the South Caucasus is sincere, or this was just an attempt to save the face after the conflict with Georgia.