The film profession in the Balkans - BOOK NO MORE AVAILABLE 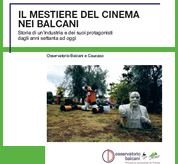 Twenty years after the end of the cold war, cinema offers an original perspective highlighting the political-social, economic and cultural transformations in South East Europe. Telling the stories of the inhabitants of the Balkan cinema microcosm, this volume analyses the cultural segment which has primarily shaped the collective imagination of society in the region, from the boom of the 1970s to the globalisation of recent years.

The book describes the film industry in Albania, Bulgaria, Bosnia Herzegovina, Croatia and Serbia, its history as an instrument of propaganda for the communist regimes, the catastrophic crisis of the 1990s and its relationship with the global market of the 21st century.

Giving greater insight into the “larger picture” through the eyes of the people who lived through it, the essays contained in the work show how, still today, cinema represents a sector of excellence, able to contrast the cultural and political alienation of the Balkans in the last decades.

Title: The film profession in the Balkans. The history of an industry and its protagonists from the 1970s to date