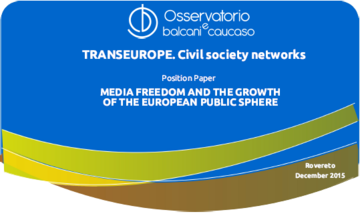 The EU has consistently recognised media freedom and pluralism as fundamental pillars of democratic systems, enshrining these principles in EU binding documents. As far as Enlargement countries are concerned, Commissioner Hahn recently stated that media freedom is an “imperative” and that “without freedom of the media, a country can not be part of the EU".

Despite this, both in Member states and in the countries aspiring to join the EU, media independence and the safety of journalists are often under pressure by means of direct and indirect threats.

Taking a closer look at the situation in EU member states, Freedom House warns that Europe registered the world’s second-largest net decline in media freedom since 2004, a deterioration which is second only to Eurasia. Such deterioration can be attributed to the incremental erosion of the legal and economic environments - the product of several trends including the digital evolution as well as negative factors such as the economic crisis and the securitarian turn, that further facilitate the interferences with the ability of journalists to cover the news in person.

Author: OBC (The position paper presented at the TransEuropa conference has been complemented with the comments collected in the course of the seminar)