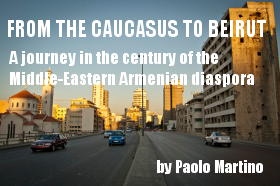 A century ago, the Armenian genocide marked the end of the Turkish-Armenian cohabitation in Anatolia and entrusted the Arabian Levant with the destiny of the survivors. Aleppo, Damascus, Baghdad and Amman thus became the bosom of the Armenian diaspora.

It is in Lebanon, though, where the highest peak of understanding is reached between the Armenian exile and the Arab world. The Diaspora University is founded in Beirut, Armenian awareness and political claims rise, the myth of the return survives and is renewed, the soul of the largest Armenian community in the Middle-East expresses itself. It is from Beirut that the diaspora spread to Europe, United States, South America and Africa.

Paolo Martino departed from Beirut and, through Eastern Turkey, Jordan and Syria, he reached Yerevan, the capital of Mother Armenia, so evoked yet such a stranger. The report From the Caucasus to Beirut runs over the umbilical cord of the diaspora through places of escape and exile. In the background, an Arab Spring-stricken Middle-East, the most powerful wind of change that has ever blown over those skies.