Page Zero, Journal from the Border

This publication dedicated to border literature was born in Friuli Venezia Giulia. After 11 printed issues, it moved to the web. An interview with Mauro Daltin, one of its founders

This independent magazine has the capacity to create a meeting space for the ideas and emotions that run along the border. PaginaZero PageZero a quarterly dedicated to literature, arts, and culture, created four years ago in the province of Udine, closes its paper edition in order to become an online website and a blog.
Founded by Mauro Daltin and Paolo Fichera in 2003, with an editorial office in Cervignano del Friuli, and with 11 issues published and distributed in bookstores and libraries in Friuli Venezia Giulia, PaginaZero has become a platform for intellectuals, writers, and journalists, on both sides of the border. It has also become a media for telling unpublished stories, parallel interviews, important contributions, and original debate.
In the words of its two editors in the last printed edition, PaginaZero has managed to create its own cultural brand, and managed to survive without having to resort to commercial publishing. Currently, by adapting to the Internet's evolution, PaginaZero transforms into a virtual space for exchange, in order to use the increasing opportunity and the possibility for greater diffusion of intercultural exchange. It uses the web to move across the border.

When and how did the project PaginaZero come about? 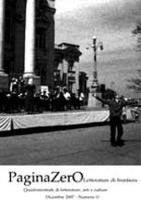 The print edition of PaginaZero was born four years ago, with the production of three experimental issues. It was transformed into a real magazine starting with the fourth issue. PaginaZero came from the passion of a few people and the willingness to explore, from a cultural point of view, what was going on in some interesting border areas. Before the magazine appeared, a website hosted a more general literary review; whereas now there is the institutional and informational website of the magazine, www.rivistapaginazero.net, and a blog at
http:// rivistapaginazero.wordpress.com.

As it is often the case, the name comes by chance. We like this name because it sounds like we start anew with every new issue; it signifies a constant beginning, a will to start all over each time. In addition, the name PaginaZero has always been accompanied by the motto "Literatures of the Border". In this case, the plural is not accidental but deliberate, in order to underline the various cultural genres.

How many issues did the paper edition produce and what was its circulation?
We closed it down with the eleventh issue, which was published a few months ago. Each issue had a circulation of 500 copies and was accompanied by events, forums and readings. Our idea is to complete the four years of activity with a book that would contain all the material produced in the project.

What does it mean to publish a border review?

For us it meant concentrating on the concept of the border, which has been much abused over the past years. I think that in some way we will miss the border between Italy and Slovenia. I say this as a provocation also, but to overcome that border, that wall, meant going on the other side, exploring, finding out. It can obviously be done better without the wall, but any border will be surpassed, its contradictions will be lived, as well as the fears. In my view, the border did not fall; it only moved a few kilometres further. To make a review on this phenomenon, on the Balkans, on the intellectuals in that region, meant exploring - not trying to understand - but recording voices, energies, contradictions, mixing points of view, crossing constantly from both sides the mental and cultural wall. In the beginning, we concentrated on the physical borders; then we moved into exploring the cultural and linguistic ones, in order to end with the informational borders, which are perhaps the real puzzle of the last decades.

How did this experience affect you, your associates, and the territory PaginaZero covered?

Interest, enthusiasm, and surprise. A bit of suspicion by the community, but I never worried or complained about this. We accepted things as they came, forged human relations instead of literary ones. This has been the major effect of the magazine.

Did a real intersection between the East and West emerge over the past four years - even if an underground one or almost invisible - as it appears to the readers of your review?

One of our goals was to talk about East and West and the stereotypes perpetuated by these definitions. To bring side-by-side, Russian poets, Serbian and Croatian writers, Bosnian intellectuals, Italian cultural actors, has perhaps at times created an intersection between these worlds which are so close, but which still communicate very little.

What are the challenges in running a "quarterly of literature, arts, and culture"?

The usual ones surrounding a review. Bookstores do not keep reviews any more because they do not bring profit, administration costs, expenses are high, exhaustion is ever-present. There was cold reception by some young writers, but at the same time an almost embarrassing response - in terms of its simplicity, humbleness, and availability even after a single letter of encouragement - by some grandees such as Magris, Matvejevic, Ovadia, Morandini, Bartolini, and so forth.
And the unexpected satisfactions or surprises?

Exactly the last things I mentioned in the previous response: many wonderful emails; the inclusion of PaginaZero among the best Italian reviews in the anthology "Best Of" by Minimum Max. However, above all, the evenings, meetings, debates, the creation of the issues...

What are the most memorable episodes and most prestigious contributions to the by now legendary PaginaZero?

Certainly, the trip to Sarajevo and Mostar was a wonderful moment for the review. Then, a beautiful reading in Treviso with the Slovene group Autodafe, but many other moments too. The most prestigious contributions were many, from Predrag Matvejevic to Moni Ovadia, from Bozidar Stanisic to Josip Osti, from Paolo Rumiz to Aghota Kristoff, from Giacomo Scotti to Melita Richter, from Pietro Spirito to Elio Bartolini, from Goran Petrovic to Natasha Radojcic, from Angelo Floramo to Flavio Santi. However, there are definitely many more I am forgetting at the moment.

Regrets for some unrealized idea?

No regrets I would say. I think we succeeded in doing what we wanted to do, with enthusiasm and passion. Then, some things worked out better, others less good, as always.

What does the passage from paper to the web really entail?

A different tone, even though even blogs are quite inactive lately, and perhaps there is the need to do new, different things: much shorter pieces, use of other instruments, such as the video, greater publishing freedom. However, we have always preferred quality to quantity.

What is the "scope of activities" of the blog connected to a website?