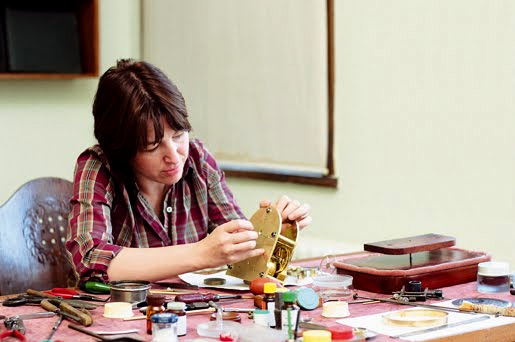 Şule Gürbüz and her clocks

She's not a hermit, though in other times she could have been. Her job is not in keeping with the times: she repairs the clocks in the Ottoman palaces. Şule Gürbüz is the only woman in the world to be an expert in mechanical clocks and author of two collections of stories which are small jewels of contemporary Turkish literature: Zamanin Farkinda (Aware of time, 2011) and Coskuyla Olmek (Die enthusiastically, 2012)

Aged only eighteen she wrote her first novel, Kambur (The Hunchback, 1992), published at the first attempt by the well-known Iletişim, likewise publishers of her last two works. But, apart from an interval marked by a collection of poetry and a theatrical text, for almost twenty years Şule Gürbüz has remained outside the Turkish literary scene. She studied History of Art in Istanbul and Philosophy in England. On her return she became apprenticed to Recep Gürgen, the last master clock maker in the Imperial Palaces, to then become in her turn a master.

Over the years the two of them were able to set working more than 300 clocks, both Turkish and foreign, belonging to the period between the XVI and XIX centuries. For the most part these clocks were recovered from a state of abandon and then put on show in museums which are today housed in the Topkapi and Dolmabahçe Palaces. This path has played a determining role in Gürbüz's writing which reflects on human existence and the sense of life using expressive and ironic language, taking up and giving voice to various themes in the Turkish-Muslim culture.

OBC met her in the Dolmabahçe Palace workshop where she had been working for fifteen years. In the background played classical Turkish music, an irreplaceable source of inspiration for her writing.

What has changed in people's lives as the solar clocks used during the Ottoman period were abandoned in favour of Western style clocks?

Life which was based on a Turkish style clock was a little more simple, more sober. In that way of measuring time, which remained in use until 1924, the day began very early, with the call of the Muezzin to morning prayer (sabah ezani). It was directly connected to the light from the sun, it changed with the seasons and was in harmony with changes in nature. The rhythm of the day was established by other prayers, the afternoon one (gle ezani) and late afternoon one (ikindi ezani). People went home for the evening one (akšam). Naturally, since people got up so early in the morning, they also went to sleep early. The elderly recall that in the past there was a night prayer (gece) that was recited getting up from bed in the heart of the night, a moment cited also in the Koran while there was not the [present] one before going to bed (yatsi).

It was a more mystical way of life, simpler, as religions prescribe. Man, setting himself against this style of life, wants to reclothe it with new layers because that simplicity seems poor. Islam too, if its real teaching were followed, commends living simply. But this simplicity is difficult to accept and rarely appreciated. Obviously, in the past as well, there were many who found this rhythm of life boring, considering it a bit too much “for hens” (she laughs). Perhaps it is not realistic to look back, defining the past as beautiful and romantic. But certainly, for those who love the rhythms of that vanished world, times gone by hold a very special fascination.

There is a general tendency to establish whether something is more like one thing or another, a question often not asked: “are you one of ours or theirs?” The truth is that each person is a unique element on their own. At the same time nothing can remain completely separate and independent. Personally I don't find similarity between Turkey and the West. On the contrary, I think the West is somewhere we are least like. The way in which we try to resemble the West is always inexact, always rather clumsy. A great irony derives from this situation. The question of our similarity with the West has caused a certain suffering since the foundation of the Republic. For myself, I've never felt it, even because I never thought of becoming “Western”. It's more a question of a vexation for those who want to be so. I would say that, in the same way, the part of Turkish society that feels more “Eastern” has never had this problem. The question is another: there are many who are no longer able to understand their own roots, the native culture produced in this country.

They are not able to. Even with my stories I see that the readers gather only a minimal part of the subtle references to and ironies about classical Turkish terminology, or the themes of the religious tradition. Maybe they absorb other things. It's difficult to get to an understanding of the music, architecture and Turkish-Ottoman poetry with the detached approach of an Art Historian. Because these arts have to be thought of like a table ready laid out. They are all an ensemble. It would be necessary to come to be familiar with it and internalize it, even if one does not totally appreciate it.

Our intellectuals have difficulty seeing things in these terms, because they have been immersed in Western culture. As for those who, on the other hand, know the arts of classical Turkish tradition well - and there are some - we need to look at how they interpret certain authors. I'll give you an example: the conservative sector today praises the writer Oğuz Atay for his criticism of Kemalism, although this constitutes at the most 5% of his work. After 50 years, Atay still remains a misunderstood author, with the only difference being that today he receives a lot more attention than in the past.

Coming back to the East-West question, I think it would be more realistic and satisfying if it could be transformed into something to be experimented with, to be perceived, to be represented, without falling into confusion in terminology or it becoming an obsession. One doesn't need necessarily to give oneself a definition, to say that one is either here or there or be overcome with anxiety about where one belongs. But to be able to do this, one needs to know, to understand, and even to love.

You write and speak making wide use of terms in ancient Turkish, unlike the more modern language used by most contemporary writers. How did you learn this language, even being so young?

I owe it to my background, to my mother and my grandmother. When I write, I don't worry about using simple words which can easily be understood by all, that way part of the meaning of what I want to express would seem to be sacrificed. At the same time, I consider that language also has the capacity to work wonders. I am convinced that at the moment I manage to describe a pain, this pain takes on a form, and by taking a form it does not belong only to me any more. This idea soothes me. It seems as though being able to extend this comfort is like stretching out a cover, to allow who needs it to cover their nakedness.

Amid all the mechanical clocks displayed in this museum, you have said you value most those made by the Mevlevite masters [Islamic mystics, followers of Mawlānā Jalāl al-Dīn Rūmī ed.] Why?

Because at the root there's a mystical state of existence which I also recognise in the working condition in which I find myself with my master. No-one asks us to do what we do, no-one understands it. Working conditions are hard. The work gives great pleasure, but it must be said that all the repairs that we've done, from the Topkapi Palace to the clocks of the schools of the minorities, have been carried out without ever receiving any payment. And at the end there's no-one who tells us we've done a good job. Just a great silence.

Being in the middle of all this and carrying on nonetheless, despite the silence reserved for us, makes for a certain bitterness. But even in the past it was like this: the Ottoman clockmakers who worked for the Palace were never asked to make clocks. The Ottomans didn't have a tradition of mechanical clocks – those that there were came from abroad. Even the necessary tools were lacking as a result. And yet they set themselves to make them, using all the means at their disposal and in the end achieving unusual results, but of a very high level. Here I recognize a strange obstinacy but which I understand well and love deeply: the obstinacy of one who creates something no-one has asked for, with the sole aim of leaving what was made as a “trial”.

At the moment I find myself in the same situation, one which nurtures me and permits me to grow. It's a difficult sensation to explain and I won't even try to. I only know that I find it sweet almost as if I were tasting a sugar lump. Suffering and joy at the same time. The wonderful works that the Ottoman masters left had been abandoned and were in a sad state. Over time we have fixed them and got them working, all of them. They are unique works, quite unlike any others, expressing the dreams of the master who built them. A single piece made with the dedication of a lifetime, without any example to refer to. Rare individuals who lived tenaciously and roughly like thorns, with the force to resist the world.