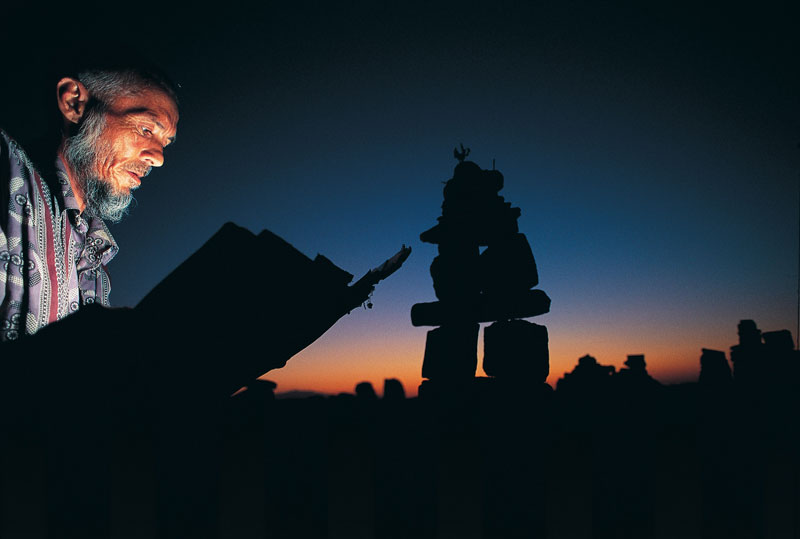 Fatih Pınar is a photographer and an experimenter. He tells stories about daily life, transformation and urbanization in his country, Turkey. His work consists of meticulous photographic reportage with short embedded videos, never forgetting the duty of the news reporter: reporting the truth. An interview

What led you to abandon your studies as an economist to become a photographer?

Photography never was a job to me. I had my first contact with photography when I was a university student. I started to question things and I was looking for something which would allow me to express myself from a creative point of view: that is how I started to attend photography seminars organized by my university. By the way, I did not like economics, I had no aspiration to become a tax consultant or a banker.

After a while, my interest in photography turned into passion and I decided to abandon my studies and go to Istanbul to work for “Atlas ” magazine. I did not want to become just another photographer, my goal was to work for that specific magazine because I knew that there I would have the opportunity to produce reportages traveling around Turkey and the rest of the world. In particular, I would have the opportunity to tackle less-covered issues and go to the most dangerous places. In short, Atlas was not your usual travel magazine with pictures of smiling people on beautiful beaches. It was not so easy to get my first assignment. I had to try over and over again for several months, but I never gave up.

You chose a very specific path for your work, which can be defined as “human documentaries"...

I understood what I wanted to focus on over time, but I was always interested in photographing human beings. Later on, when I started working for “Atlas”, I focused on social and cultural issues, and I started to take close portrait photographs of people. I am able to take such close photographs of people after spending a lot of time with them and creating a dialogue based on mutual trust.

This was the most attractive element of my work for the magazine, and was also my own way of looking at the world. I have always loved to listen to other people's life stories; I have always wanted to know about them. In time, being able to tell somebody's story grew more important than anything else. That is why I see myself as a news reporter rather than a photographer: I am a journalist working through photographs. I am not interested in shooting pictures with great visual impact; I'd rather produce work that helps the public get to know the lives of people facing challenges in specific moments of their lives.

Does your choice to use several multimedia products as a means of expression have something to do with this view?

Exactly. I came to this point after having traveled all over Turkey and twenty other countries for six years. I visited many villages and extremely torn areas of South-Eastern Anatolia. I was a news reporter in Palestine during the second intifada in 2002 and at the beginning of the Iraq war. My main goal was to accomplish a historical and social mission by documenting what was going on before my eyes.

In 2004 I left “Atlas”. I was unemployed for a while. In that period, I lived in the United States and Germany for a couple of months. When I went back, I started to develop photographic reportages composed of images with accompanying voice recordings. I proposed my project to the NTV online site, Msnbc , which accepted it. That is how my works portraying moments of collective life began. My project included reportages of national celebrations, migrations of the Sarıkeçili nomad shepherd tribes, Ramadan, drivers of minibuses in Istanbul, street cleaners.

In these works, I could freely shoot up to twenty framings, so I had the opportunity to catch the tiniest details of the subjects I portrayed. When I started to associate sound with images, I started to perceive these people's lives not only through my eyes, but also through my ears. I learned how to record a voice for each image. Now I can also make videos with my camera; however, my videos never last more than eight to10 seconds. I use the video camera as if it were a camera. My works became a mixture of all of the techniques which we call multimedia. Sometimes I also add music and texts. I taught myself how to do it. I have never had teachers or attended courses, I simply take advantage of the opportunities provided by modern technologies to experiment with new forms of expression.

What is the role of a news reporter like you in today’s Turkish media?

The photographic reportages I want to make don't have a place in any mainstream Turkish media. Last year I worked for the Msnbc news website, but this year they decided not to continue our cooperation.

Because they thought my works dealt with marginal issues and were over-critical. However, I don't think I have tackled the most critical issues. I wanted to portray the lives of people with temporary jobs and of children living on the street. No one wants to tackle or let other people talk about "hot" issues, and everyone, both journalists and citizens, feels the need to censor him or herself. This happens because if you talk about certain issues and you don’t censor yourselves, you end up in a corner.

Given the situation, the Internet is an excellent alternative to traditional media. In order to oppose this general tendency to imposed self-censorship, I upload my videos on Vimeo and promote them through Facebook and Twitter. I see that thousands of people watch the videos and this makes me part of the independent media. Maybe I can't reach millions of people, but at least I am free to manage the material I want the way I want.

What do you think about the images published in the Turkish media?

I have noticed that on some Internet sites of mainstream newspapers, you can’t distinguish the home page of an on-line newspaper from a pornographic website. The screen is full of women wearing bikinis and pictures taken from gossip magazines, and you have to read very carefully before you can actually read the piece of news you are interested in. This is the most vulgar means of obtaining ratings and it has two main goals: it pushes the reader away from both politics and information.

How about your work on urban transformation in Istanbul? 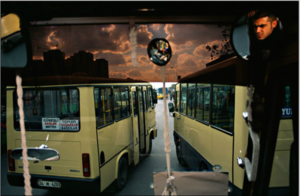 On the minibus - fotoreportage by Fatih Pınar

The project lasted one year and is now finished. However, I might go back to this issue because the transformation process occurring not only in Istanbul but also in other parts of Turkey is getting more and more intense. In Turkey we are now ruled by the language of money, which started with the Party for Justice and Development (AKP). They speak the language of money which, along with with conservative policies, is the reason for its success, not religion as one might think.

This is true not only in large cities, but also in the most remote Anatolian villages. When you sit in a café, right after having said hello, people ask you about your monthly wage, your car, your house. These are personal questions and until recently they were deemed inappropriate and impolite.

What you are is not judged according to how pleasant your conversation is anymore, but on your status, on your symbols. The new changes going on in Istanbul, such as the project for the third bridge, the Bosphorus Two, were all planned according to this materialist approach. We are talking about extremely expensive projects. However, no one is forcing Istanbul to become the new Shanghai or New York. Istanbul is beautiful as it is. By concentrating millions of people all around a huge city/consumption center, you turn historical parts of Istanbul into luxury goods, places where people who became rich during the AKP rule can acquire a new status and become classy.

What is your next project?

I want to go on with video-activism as much as I can. I am now working on a documentary. I would like to do work that stands the test of time and reaches the highest possible number of people. However, this is not easy in a country where TC channels broadcast documentaries as a form of punishment, only when they are sanctioned by the Higher Council of Radio and ask the director for payment in exchange for broadcasting his documentary. I have tried to support myself without giving in to doing mainstream work, but it is getting harder and harder.