A Levantine in Turkey. A glance over the Bosphorus 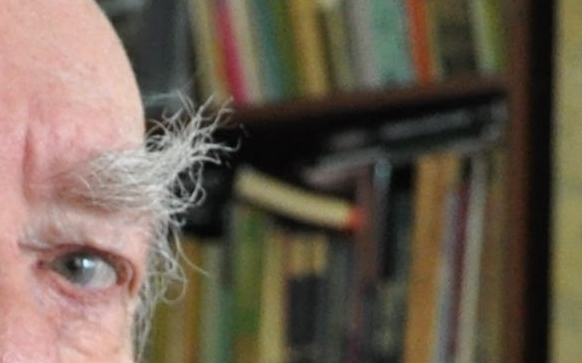 Giovanni Scognamillo, of Italian descent, is an expert in the history of cinema. He talks about his life in Turkey, inextricably intertwined with the life of his city Istanbul, through the eyes of a "forced cosmopolitan". Our interview

Giovanni Scognamillo is one of the most pre-eminent experts in the history of cinema in Turkey. He told  Osservatorio Balcani e Caucaso about his life, which is inextricably intertwined with the life of his city, Istanbul; he interprets the city through the eyes of a "forced cosmopolitan".

Let’s talk about your family. When did you move to Istanbul?

My grandfather came to Turkey from Naples around the mid-nineteenth century. He used to be a cook in his country, but here he worked as a bricklayer before he found a job at a school operated by French monks and, later, at the Austrian Embassy. He married a girl from Naples, a daughter of the Sciacca family. They had two sons, my father and my uncle. My mother’s parents came from the Greek Island of Tinos, their surnames were Filippucci and Della Tolma. As you can see from their names, these Greek were of Italian descent, from Genoa, and they later took Greek citizenship.

But you grew up here in Istanbul…

Yes, I did. I was born in the Italian hospital, in the district of Şişli, and I grew up in an old house in the Asmalı Mescit neighbourood (near the Galata Tower, Ed.). It was the golden age when the marks left by the ancient Pera were still well visible in Beyoğlu. I went to the Italian school, first to Giuseppe Garibaldi school, then to Liceo Classico, where, for three years, I studied Latin, Philosophy, Kant’s The Critique of Pure Reason, Dante Alighieri, Ariosto, Manzoni and the poems written by Benito Mussolini (which were awful, by the way). I wanted to study Psychiatry at university, but financial problems kept me from studying.

So you started looking for a job…

I worked in a bookshop, in a furniture shop, and as a bank clerk. Then, I discovered cinema. My uncle asked me to become his partner in a film-distribution company, but the advent of the television era dissuaded us. So I decided to go on with my job as a journalist: I had started writing in 1961 for the leftwing daily newspaper Akşam. I worked both as a film critic and as a writer and international manager for a film production company until 1987, when a paralysis forced me to retire. The only possible option then was to keep on writing, and that is what I did.

You lived your whole life in Istanbul’s “little Europe”, Beyoğlu. Which role did this district play in your life and how did Beyoğlu change? Did it lose all of its old splendour?

I am not a nostalgic. Changes taking place in Beyoglu and, in general, in Istanbul, are not only Turkey’s problem, but also an issue regarding all European large cities. For me, Beyoğlu has always been a sort of no-man’s land, a European district in the heart of a city which is not properly an Eastern city and not even a European one. It was a gate through which all signs of modernisation coming from the West had to pass: cinemas, theatres, bikes, gramophones…then the district started to change, and what is left today is only a remote memory of the old Pera.

The "levantines" in Istanbul

“Levantine” was the term used to describe non-Muslim citizens of European descent during the Ottoman empire. They mostly came from Italy and France to Anatolia during the second half of the nineteenth century. They were invited by Ottoman authorities in order to speed up the modernisation process in the country. Levantines have always played a crucial role in Turkish culture and arts. The Italian community had schools, churches and hospitals in Istanbul, and also political organizations such as the Banco del Mutuo Soccorso Operaio founded by Giuseppe Mazzini, which counted back then among thirteen and fourteen thousand members. Today, there are definitely less "Turkish Italian" left, only one thousand according to optimistic estimates. Levantines of Italian descent used to live together with the Greek, the Armenians, the French, the Jews in the historic district of Pera, which was later renamed as Beyoğlu during the Kemalist age. They left Turkey after the second world war: they were the victims of nationalist propaganda, which depicted minorities as the internal enemy.

When did the delicate balance that underlay the multicultural mosaic of Beyoğlu break?

At the end of the second world war, we sensed that an age was coming to an end, but the events which took place on 6 and 7 September  1955 were the final blow to Beyoğlu’s atmosphere of peaceful co-existence.

What happened during those days?

It was a total chaos. Those were the times of the war with Cyprus, and the Turkish government led by Menderes and Celal Bayar wanted to show that all the Turkish people was on the side of Turkish Cyprus patriots: therefore, they organized a plan aimed at giving a strong signal. On 6 September  1955, all the Greek symbols of Beyoğlu were targeted, including shops, churches, and cemeteries. It was total chaos, nationalists on trucks were waiting at the gates of Istanbul for a sign. When they entered Beyoğlu, they started to destroy everything. We lived in Meşrutiyet street then, near the Grand Hotel del Londres. We saved ourselves by hanging a Turkish flag out of the window and a Turkish shoe seller (who wore a long beard and a skullcap) stood in front of our door all day telling everyone: “This family stands by our side.”

Which were the consequences of this nationalist attack on Turkish society?

From the economic point of view, it was a disaster for Turkish economy; from the political point of view, the attack was useless because the man who put a bomb in the house where Atatürk  was born in Thessaloniki, (this was the event which served as an excuse for the attack) later proved to be not a Greek but a Turk; indeed, a member of a radical Turkish organization. It was a set-up, but it resulted in the mass departure of the Greek, some of them were even expelled.

In spite of this xenophobic atmosphere, you never felt like a foreigner in Turkey. How do you explain that?

Well, I think that the Levantine’s problem is that they never wanted to be integrated in society, they had a colonialist approach. I decided to integrate, I wanted to. The only way to work in the world of Turkish cinema and literature was to integrate, so that people reading my articles could forget that my name was Giovanni Scognamillo.

In your book “Memories of a Levantine in Beyoğlu”, you write that you were the first Levantine to write in Turkish instead of Italian or French, why?

I made this choice for merely practical reasons. If I had written in French on Istanbul’s newspapers like Beyoğlu, la République, or Le Journal d’Orient I would have had a limited amount of readers. The only possible option was writing in Turkish, so that as many people as possible could read my articles.

What was the influence of this choice on your relations with the Levantine community?

You see, I never was a nationalist. At the end of the second world war, I decided to be a citizen of the world, I had had enough of belonging to one single country, which sooner or later became the enemy of another country. When I was a child, I used to be a balilla (Mussolini's youth organization) and my father was a passionate Fascist. This led me to forget nationalism, patriotism, and the flag. 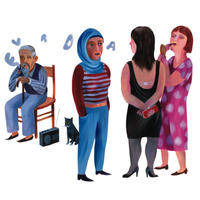 It is not offensive for me. We are in Turkey, we live like the Turks, I never had that colonialist feeling, which leads many people to proudly state, “We are Europeans.” What is the meaning of such a statement? The fact that my ancestors came from another country has always been a richness for me, not a problem. Many people today think I am a Turkish citizen.

No, I am not, I only have an Italian passport. I do not want to change neither my nationality nor my religion, even if I am an atheist.

In Turkey, talking about Levantines is almost fashionable. What do you think about this?

Since the beginning of the 80s, people have been talking about Beyoğlu repeatedly. Everyone is so nostalgic; everyone misses those days, even people who weren’t even born yet. Once I was near the historic Marquise Restaurant in Istiklal street and I saw two young people looking at the mosaics. “Those were the times...” said the young woman. She must have been 20 years old. Talking about Levantines may have become fashionable, but the past is the past and I don’t like talking about the past, even if I am an expert in cinema history.

Do you regret anything?

No. There is only one thing which pains me: up to the beginning of the second world war, the model for Turkey was Paris, then we turned to New York. I think that the result of this model is not a truly Americanised culture, it is just a processing of what is left of European culture, which was not reinterpreted but simply reviewed and betrayed. We are not talking about a culture-related problem; we are talking about the lack of culture. New generations today are more interested in the American non-culture than in European culture.