From soldiers to caregivers 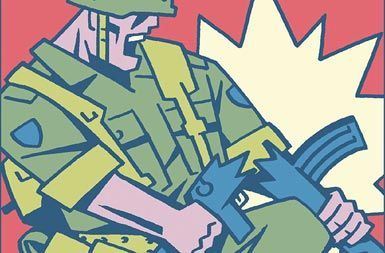 The Slovenian weekly newspaper Mladina has proposed the following: abolish the army and transform soldiers into either caregivers for the elderly or emergency management staff. More than five thousand people have already signed a petition in support of the proposal and the debate is heating up. Insight from our correspondent

In Slovenia, over five thousand people have signed a petition calling for the abolition of the army. The weekly newspaper Mladina launched the following proposal: soldiers should be retrained as caregivers for elderly people or as emergency management staff. The pacifist and anti-military wing of Slovenian society (mainly composed of supporters of liberal, centre-left parties) has enthusiastically voiced its support for the Mladina initiative.

Minister of Defense Ljubica Jelušič immediately labeled the proposal an attack on the Slovenian Constitution and on defense law. The debate echoes a similar dispute that took place in the late '80's, during the time of the breakup of Yugoslavia, about the role of the army.

In Slovenia, hostility towards the military has deep roots. In the ‘80's, a time when criticism of the army was inconceivable in the rest of the Federation, Slovenians fiercely criticized the Yugoslavia People’s Army. Army officials heavily attacked Lubjana for having openly criticized the army. The army's highest-ranking officers did not conceal their fear that criticism of the military was an attempt to undermine the State itself.

Soon after the first democratic elections took place, some members of the former Youth League (who had, by then, founded the Democratic-Liberal Party) proposed “a Slovenia without an army.” They took inspiration from Costa Rica. Janez Janša, Minister of Defence at the time, was greatly offended. He hinted at the fact that it was not the right moment for Slovenia to indulge in such dreams: on the contrary, it was necessary to create a strong military structure ready to defend the country when Slovenia proclaimed independence.

Indeed, Slovenian soldiers posed a serious obstacle for the federal army during the 1991 intervention in Slovenia. Ljubljana still considers the 1991 clash a won war.

Janša and his soldiers gained the status of heroes among their own people. The love of Slovenians for their army seemed destined to last, but that all shattered in 1994 when the Parliament expelled the minister of Defence. The army had arrested a police informer allegedly holding compromising documents; an act which was considered inconceivable. In a surreal stand-off between the army and the police, Janša was forced to resign.

Whoever was right, Slovenians did not put up with the army’s attempt to interfere in civilian life. Slovenians have had enough of the army: for too many years under Socialist rule, the army was practically an independent state, acting according to rules different from those regulating civilian life.

A statement by brigadier general Alen Geder has also provoked harsh criticism. Geder recently stated that the army was preparing to deploy Slovenian helicopters to Afghanistan in 2012. Democratic Liberals and the Zares Party immediately asked the Defence Minister to report to the Parliament about these intentions. No one had ever talked about deploying Slovenian helicopters to Afghanistan. Jelušič tried to take her time, but she was put on the spot by two very popular members of the governing coalition, Democratic Liberal Anton Anderlič and Franco Juri (member of the Zares Party).

Slovenian soldiers have been in Afghanistan since 2004, but they have only recently started to perform more complex operational duties, such as setting up their own training teams for the Afghan army. This part of the mission has raised the most controversy. Some people are starting to ask for Slovenia's withdrawal from Afghanistan. The debate started to heat up at the end of last year when approximately sixty soldiers had to wait for weeks before they could finally return home because the Slovenian army has no aeroplanes for the transport of troops. The situation did not allow for the departure of troops on civil flights, and Slovenian soldiers had to wait for the Americans to arrange a flight to take them home.

Anyway, there seems to be some unrest at the Ministry of Defence. Deputy Minister Aleš Krek resigned and then withdrew his resignation. According to the press, his decision was due to vague “disagreements” with the Minister. In the meanwhile, the newspapers started to mention an alleged conflict of powers. The Večer openly accused Jelušič of being “too benevolent” toward the army’s habit of having its say about defence issues.

Problems allegedly started with the nomination of the new chief officer, General Alojz Štajner. Jelušič is not only the minister of defence, but also Stajner's former university instructor: she assisted him when he was writing his final Ph.D. dissertation. According to the daily newspaper Maribor, this close relationship is “troublesome” from the point of view of control over the defence system.

Štajner took office last May, replacing General Albin Gutman. This “changing of the guard” was partly due to a dispute about the supply of Finnish armoured “Patria” cars to the Slovenian army. Furthermore, at the end of the year, Gutman had to face the judiciary’s request to initiate a proceeding against him on the grounds of “unfaithfulness in management of a public service.” Former Minister of Defence Karl Erjavec also faced the same accusation.

Today, Slovenia has a professional army. Compulsory military service was cancelled at the end of 2003. The army totals 9,300 units; some of them are permanent, others are reserve forces. Last year, the State spent over 550 million Euros - 1.5 percent of Slovenia's GDP - on the army. Due to the financial crisis, there has been pressure to cut the military budget (funds destined to the army were, in any case, reduced by 80 million Euros). Jelušič specified that any greater cuts to military spending would compromise Slovenian military participation in international missions.

In addition to its troops in Afghanistan, the Slovenian army has sent troops to other peacekeeping missions in countries such as Lebanon, Syria, Somalia, Bosnia and Herzegovina, and Kosovo. It is from Kosovo that the first casket, carrying the body of the first Slovenian soldier to perish abroad, returned: it carried a young woman who had shot herself with her issued weapon.