Collio and Brda, together towards UNESCO 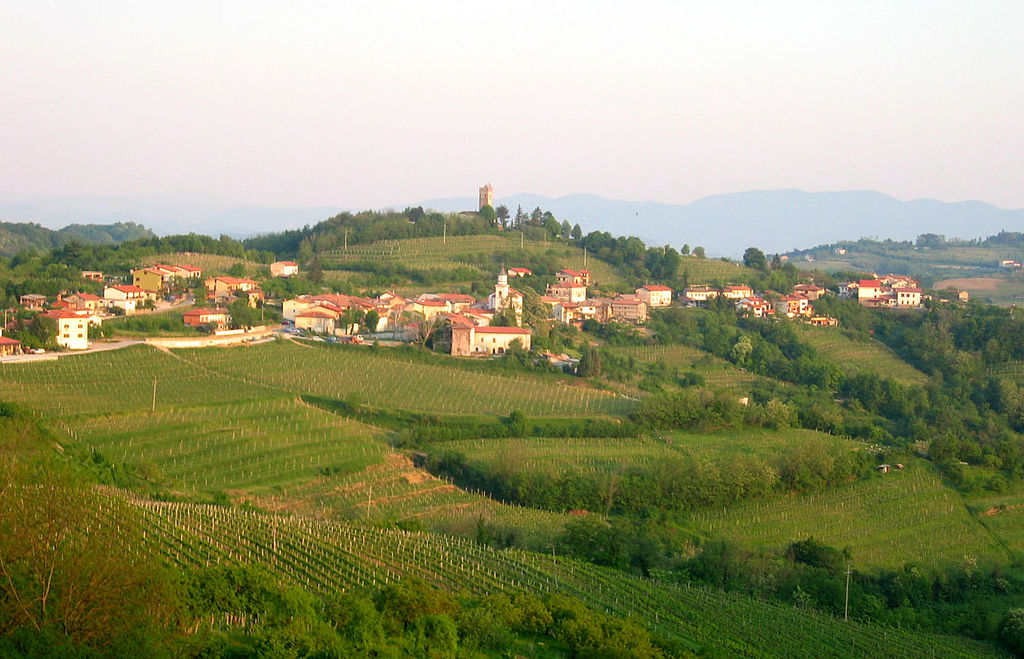 Hills extending on the border between Italy and Slovenia, terracing, and dirt paths – an ideal location for wine production. This area, once divided by the Iron Curtain, today could symbolically unite

Looking down from the hills that extend to the northwest of Gorizia, on the border between Italy and Slovenia, it is difficult to guess where exactly the line separating the two states passes. Covered by gentle terracing and crossed by dirt paths, these hills, famous in both countries for the wine they produce, are named after their shape, carved by the long action of atmospheric agents: "Collio" west of the border and "Brda" to the east.

For decades this landscape, which stays identical across the border, was cut in two by the Iron Curtain, which left behind many stories of division, mistrust, and lack of communication. But in December 2007, with Slovenia's entry into the Schengen area, the border crossings stopped working and the red and white bars that regulated the passage were removed. Now, a recent initiative could bring the two souls of the area even closer, uniting them symbolically.

In 2015, several municipalities of the Italian Collio and the Slovenian municipality of Brda agreed to present a joint application for the UNESCO area, meeting support from both the Friuli Venezia Giulia region and the Ljubljana government. As the procedure is set to meet decisive milestones by the end of the year (joining UNESCO at the beginning of 2019), these long-separated hills could live a new youth, perhaps with closer collaboration, also in matters of wine production.

"We could do a lot more in terms of collaborations with our Italian neighbours, but for now it's zero". Aleš Kristančić, director of the Brda consortium since 2003, has no qualms describing the current state of affairs. Very close, yet so far, Slovenian and Italian wine producers carry out their work "separately", as also admitted by the representatives of the Consorzio Collio. "Only at the beginning of 2004, when Slovenia entered the EU, we had a joint presentation of the wines in Piazza Transalpina (the symbolic square between the two states, ed.)", recalls Aleš Kristančić.

Still, Collio and Brda have a lot in common. The Italian side extends over 7,000 hectares, all hills, and produces a total of over 6 million bottles a year, for the most part (86%) white (Pinot Grigio, Sauvignon, Friulano, Ribolla gialla, etc.). Beyond the border, the municipality of Brda also has an area of about 7,000 hectares (of which 2,000 vines). Here too, white wines predominate (70%), although with a small difference: the larger presence of rebula/ribolla which, explains Kristančić, "prefers higher places, over 100 metres above sea level, and Brda is indeed slightly higher than the Collio".

Also the story of Tocai (or Tokaj) has united the two hills on the border. Until 2008, this name was used to indicate the still white wine typical of the area. Then, the European Commission ruled in favour of Hungary, which obtained exclusive use of the term as the only wine-growing area with that proper name (Tokajhegyalija, where Tokaj is produced). Collio and Brda then had to solve a small identity crisis. In Italy, it was decided to call the Tocai simply "Friulano", while some Slovenian producers, in a daring move, labelled it "Jakot".

The long road to UNESCO

The latest initiative that sprouted on the Italo-Slovenian hills could lead to a – at least formal – reunification of the area. The idea of the joint Unesco candidacy was born as early as 2014, "during a chat" between mayor of Brda Franc Mužič and former mayor of Dolegna (Gorizia) Diego Bernardis, today regional councillor in Friuli Venezia Giulia. Dolegna then acted as leader, involving the other 7 municipalities of the so-called "Historic Collio".

In 2015, Cormons, Capriva, Mossa, San Florian, Gorizia, Farra, and San Lorenzo signed a memorandum of understanding with Brda, Dolegna, and some "economic actors, such as the Chamber of Commerce, some banking foundations, and with the support of the Friuli Venezia Giulia region", specifies former Regional Councillor for Agricultural and Forestry Resources Cristiano Shaurli (in office until May 2018). A promotional committee was set up in order to prepare the area's entry in the so-called "tentative list" of UNESCO.

The name of the site that would be included in the world heritage of humanity is "Rural Landscape Collio (Ita) and Brda (Slo) between Isonzo and Judrio", but the naturalistic aspect is not the only highlight. Rural architecture, traditions, agricultural activities (fruit and wine production in particular), together with the mixing of languages, ​​have characterised Collio/Brda for centuries. "Despite wars, borders, and the upheavals of history, the area has managed to preserve its uniqueness and this is what we want to present to UNESCO", explains former mayor of Dolegna Diego Bernardis.

Currently, in Italy, the work is carried out by a technical-scientific committee (there is a parallel one in Slovenia) and "three-quarters of the work have been completed", assures Bernardis. "By December 20th, 2018, we will present the dossier to the Ministry of Culture, then by February 2019 the documentation will go to UNESCO and, if all goes well in 2020, we could already be world heritage", continues the former mayor, who comments: "to have more chances of success, Slovenia will officially present the candidacy".

What could be the concrete repercussions of the initiative? Bernardis looks to Piedmont and to the experience of the "Langhe, Roero, and Monferrato" site, registered at UNESCO in 2014. "The average increase in tourist flows was 15-20% in four years, 30-35% in some areas called core zones", reports the regional councilor. Collio and Brda "would become part of an international promotion circuit and could benefit from a long series of positive effects", muses Diego Bernardis.

According to former regional councilor Cristiano Shaurli, however, "historical and social consequences are even more important than economic ones". "A territory that has been divided by a geopolitical boundary for decades, for the first time – and regardless of political orientation – decided to work as one, understanding that the border was only artificial: Collio and Brda are by all criteria the same territory", explains Cristiano Shaurli. Regardless what Unesco will say, therefore, an important step has already been made, argues Shaurli.

"Thirty years ago, or even just 15, such a project would not have been possible, because of the many divisions", continues the former regional councillor, who adds: "this is a farsighted choice that will bring great satisfaction for the territory". In short, the Unesco candidacy could be the beginning of a cross-border path of dialogue and collaboration, perhaps also in the sector that most made the area famous, namely that of wine production.

Towards a common label?

Also in the context of wine-growing, the momentum created by the application may lead in the long term to the creation of a common label. Here, however, there are greater complications, warn the insiders. "Of course, the microclimate is similar, but Collio and Brda are two distinct brands, with two different stories: the label Collio is 52 years old, while the relaunch of Brda is very recent and dates back to just 20 years ago", explains Robert Princic, president of the Collio Consortium. And there is more.

Although they both belong to the European Union, Italy and Slovenia have different rules regarding viticulture. "On this side of the border, management is much more bureaucratic and the same problem exists with labour. In Slovenia, planting a vineyard is not a problem, here between authorisations and permits the road is much longer", summarises Princic. Hence, for the president of the Consorzio Collio, future collaboration in the wine field may exist, but "within a European community that is really more of a community".

Aleks Simčič, of the Edi Simčič winery in Dobrovo (Brda), raises another point. "It is very difficult to collaborate properly (with the Italians, ed.), since the Collio can use in its marketing the brand 'Made in Italy', which is a very strong tool for promotion and sales", admits Aleks Simčič, who still regards the initiative of a joint application to UNESCO as "very interesting". The wine production road is therefore longer, but many dream of a European bottle labelled "Made in Collio/Brda".