Milan Konjović, painting is a miracle 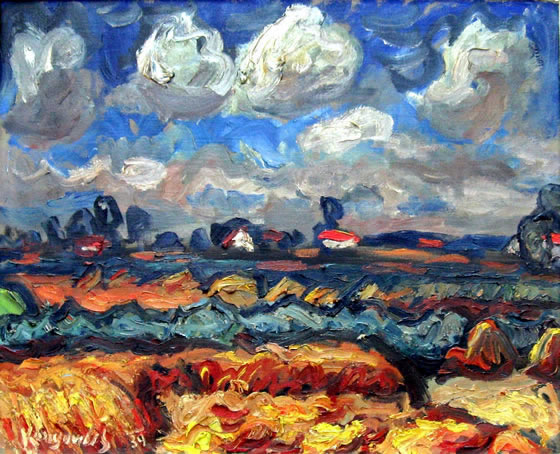 A tribute to Milan Konjović. The journey of the last of the fauves from Sombor to Paris and from Paris to Sombor, the splendor of the Gallery dedicated to him in his home town in Vojvodina

In the '70s, when I was a Slavic literature student in Sarajevo, I was friends with other students from the Academy who were from Visoko like myself. We commuted on the local trains of the Zenica-Sarajevo-Zenica trail; those trains seemed to stop at every white house. In the magic of that slowness we had plenty of time for discussing art.

To this day, I perfectly remember the words of one of my friends. When someone asked him who the greatest contemporary painter was, Ismet Mujezinović or Milan Konjović, he would give up. “I don't know! The vibrating lines of Ismet's work are unrepeatable, but the way Konjović moves the brush... Ah!”, and his eyes sparkled with joy.

For his dissertation he chose Milan Konjović's red phase. I typed it for him. That year of 1977 summer came early. In my home's orchard, under the sunlija apple tree (a local quality), typing on the museum biserka typewriter, I heard for the first time that Konjović had realized over 5,000 paintings and that he kept on working relentlessly. Also, I learned that he was born at the end of the 19th century in Sombor, the Pannonia city renowned for the beautiful “starogradske” songs, Fijaker stari and U tom Somboru, “In that Sombor there is everything, in that Sombor even women drink wine, it is the truth...”

It is the same city of the great poet of the Serbian romanticism, Laza Kostić, author of the most beautiful poem from that period, Saint Mary of Health. And of another poet, but of basketball, Radivoj Korać, who tragically died at the peak of his career in 1969.

From Sombor to Paris, from Paris to Sombor 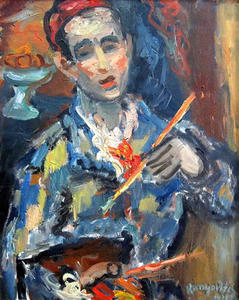 All biographies on Konjović highlight the date of May 22nd of 1924. That day he arrived in Paris from Prague with his wife Ema. “We arrived when it was early morning. I knew Paris that well from literature that, while we were walking down Boulevard de Sébastopol, it felt like I had come back home.”

Paris was the final destination of his artistic research. In the 1919 Prague, where he met his future wife Ema Maštovska, he was unhappy with this studies with Professor Vlaho Bukovac, and moved to the atelier of Bohemian avant-garde painter Jan Zrzavỳ. Leaving the Bohemian capital, interested briefly in Munich and Berlin, he then moved to Vienna, a city that had already captured the interest of Jovan Bijelić, Petar Dobrović and Branko Popović. Vienna is also the city where he encountered, between 1921 and 1922, the paintings of Oskar Kokoschka, who then lived in Dresda, and to whom he wrote a letter, which went unanswered by the great Austrian artist.

From Vienna, restless for the events of life and art, he went back to Prague to then move “for good”, he thought, to Paris...

His first studio was in Montrouge. From 1929 he lived in the 14th arrondissement, near Montsouris Park, sung of by Prévert. Here, Marcel Zielinski, a Polish architect disciple of Le Corbusier, built a house for the painter. In the house, there were three ateliers, each 6 meters tall. Zielinski also built a house for the great André Derain, close to Konjović's.

Clearly Konjović thought he would be staying in Paris for a long time. His daughter Vera was born there. In that house, it is said, he wanted to open an academy for young artists from his country. However, despite some successful exhibitions (amongst which were the Salon d'Automne at the Grand Palais, 1926-1929) and his friendship with the Serbian and Yugoslave painters living in the French capital, his Parisian adventure ended in 1932 and the painter returned to Sombor with his family.

Upon returning from Paris, he completely abandoned his brief cubist experience and dedicated himself, ascetically and solitarily, to seeking perfection in his expressionist style inclined to the fauves. Some researchers speculate that his return had been triggered by the economic crisis and depression. Others, on the other hand, believe he just wished to go back to Sombor, where he started to come out of the atelier mixing, in vivo, sensations, the color scale and intense brush strokes under the open Pannonian skies.

The painter bid his final farewell to Paris in 1937, with the exhibition at the Mouradian-Vallotton Gallery. Critics followed the event with enthusiasm. Maurice Betz, a poet and art critic, wrote “Konjović has come back with completely new themes and subjects”. Thus his blue phase was over in Paris and his red phase started in his homeland and lasted until the beginning of the war, with works portraying the streets of Sombor, the wheat fields, the sunflowers, the faces of the townspeople and the sea of Dubrovnik and Cavtat…

The period of Konjović's art between 1940 and 1952 is defined as the gray phase, characterized by dull colors, void of the fire of blue and red. There are two main reasons for his shifting to this phase: at the beginning of World War II he was made a prisoner in the Osnabrück lager, from where he returned in 1943; at the end of the war, the painter did not bend to the requests to adhere to the poetics of Socialist Realism. 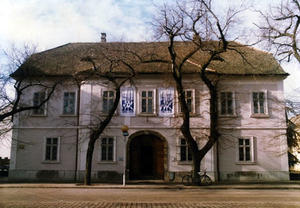 On the occasion of Konjović's exhibition in Belgrade in 1949, Jovan Popović, writer and one of the ideologists of this doctrine, criticized him because his art did not express “our new man, the man of our society who is at the same level of the man of the Soviet Union for his humanity and evolution.” The painter, however, resisted all critiques and in 1951, in Belgrade again, he realized The People, an exhibition that has gone down in the history of Serbian and Yugoslav art as a divide between an ideological fixed set of beliefs and creative freedom. And according to one of his best critics, in its own way Konjović's brush stroke, authentic in its powerful way of emphasizing colors, turned into a specific “expressionism of color and gesture”.

The next phases also witness his defense of the autonomy of painting as the focal point of how he conceived absolute freedom in art. Some critics do believe, indeed, that in his coloristic phase (1953-1959), abstract painting was only in support of the Yugoslav painters of this orientation, criticized from “above”. Konjović was also very much active in the art colonies and in some groups of artists in Vojvodina. The associative phase (1960-1984) is characterized by an actual landscape eruption and unites all his diverse creative experience. After the great exhibition in Paris at the Grand Palais (1985), an old Konjović focused on byzantine themes, realizing a cycle of about thirty paintings that leave the impression of an aesthetic fusion, free and peaceful, between the byzantine blue used by Giotto and the blue of the Pannonian skies.

As visitors enter the Gallery, they are met with a dedication from the painter. “These paintings, my beloved ones, I give to my hometown with all my love, for they belong to it only”. It was 1966 when the Municipality of Sombor proposed to create a permanent space exclusively dedicated to his work: deeply moved by this gesture, Konjović said that Sombor had understood what had escaped Cézanne's Aix-en-Provence, as the great artist proposed the local authorities to offer a building for his museum. So Konjović gave Sombor 500 of his works. Thanks to the contribution of his daughter Vera, his friends and some regular citizens, the number has risen to 1,084. That is actually only a sixth of his work (oil, watercolor, drawing, pastel colors, tapestry, sketches for theater costumes). In all these years, the Gallery has been visited by half a million people, and this year the State has proclaimed it a national cultural asset. This was also thanks to the contribution of Irma Lang, an arts scholar highly knowledgeable of Konjović's work and director of the Gallery for 42 years.

For those wishing to visit this very special art space , I recommend going with one of the custodians. Not only are they kind people, but they are also experts and dedicated to what they do. Every year the Gallery hosts two thematic exhibitions, every three years a retrospective one. From his first steps as an artist in high-school to the last breath he drew, the story of Konjović's life and work accompanies the visitor. As I observe his works in person, especially those with the fiery colors and the peculiar brush strokes, I recall the words of my friend from a long time lost, and I hear a whisper: Konjović, the last of the fauves?

And any visitor lingering in front of the artist's brush would agree with his thought. “The act of painting is a miracle and always an enigma. If it weren’t so, I would have given up painting a long time ago. It is endless and out of reach, just like the plains. You think that the end is there, somewhere. But the horizon keeps on moving.”