"In corpore sano", Serbia's hymn to health for Eurosong in Turin 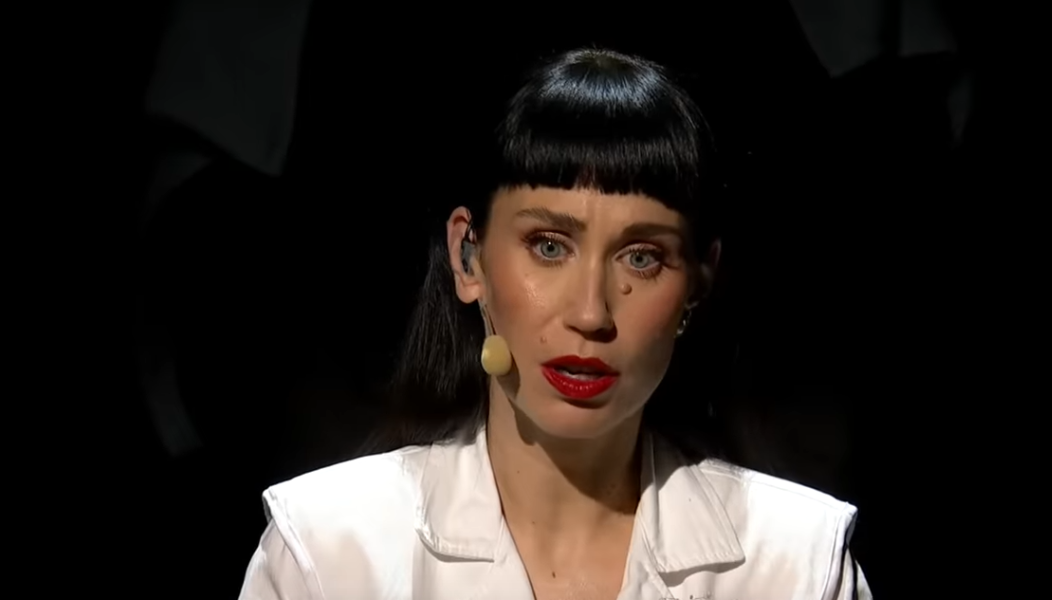 "(Umetnica) mora biti zdrava" [(The artist) must be healthy] is the warning and call to everyone's responsibility on the subject of health launched by Serbian artist Konstrakta, who will perform on the stage of the next "Eurovision Song Contest" of Turin. We interviewed her

The song “In corpore sano ” will represent Serbia at "Eurovision ", the well-known international music festival to be held in Turin from 10-14 May. The piece, written by Serbian artist Ana Duric, alias Konstrakta – who won the national competition "Pesma za Euroviziju 2022", reached the first positions  in all the countries of the former Yugoslavia, and then jumped to the top also in the listening rankings of half of Europe – is a reference in words and music to the famous Latin phrase extracted from the Satires of Juvenal “Mens sana in corpore sano”, which reminds us of the importance of mental as well as physical hygiene.

At home Konstrakta delighted many, confused some, and certainly did not leave the public indifferent. Her song caused almost media hysteria and became the target of tabloids and the subject of study among experts. For several viewers, the fact that "In corpore sano" prevailed over the usual pop-folk songs present in the competition is the signal of the awakening of a "dignified" Serbia, according to others it could even be an event heralding political and government upheavals, although the recent elections have not confirmed this.

"The performance, extremely intelligent and at the same time witty and funny, has a fantastic 'hook' that we all sang after the first semifinal. Everyone went around and sang "biti zdrava" (to be healthy)...", commented  for example composer Marko Kon, while Ljiljana Zdravkovic, journalist and musician, believes that Ana's great merit was that she went on stage with her style and lyrics "without trying to please the average Serbian consumer of popular music who expects, especially from Eurosong, a little beauty and a little sex, a little kafana, some Turkism and traditional Serbian sound in a 'mystical' show designed to shock just for the sake of shocking".

Still incredulous and despite a very busy schedule Ana, who has just signed a contract with the local representative of the world label "Virgin Music Label", has found the time to answer some of our questions.

You show up on stage in white scrubs and throughout the performance you insistently wash your hands in a basin full of water... is it a reference to Covid?

Actually the issue of health was on my mind even before. Covid has only emphasised a few things and has set healthcare as a top priority. The inspiration for the song is the relationship we have with health as individuals, society, dominant oligarchies.

The song begins with the verse in which you wonder what is the secret of the healthy hair of Meghan Markle, wife of Prince Harry (Koja li je tajna zdrave kose Megan Markl?) Why her?

It is not actually about Meghan, although she is part of what I talk about. There are actually texts  on the Internet about the health of her hair and I think they say practically nothing. So it is not about Meghan, but the media full of articles that promise health and well-being only if we use certain tricks, buy what is offered to us, follow trends…

The passage has several messages, the state of the healthcare system in Serbia, today's society in which form dominates over being… At one point you say that “Velika je sreća što postoji Autonomni nervni sistem Ne moram kontrolisati otkucaje srca Srce kuca, srce samo kuca Bože zdravlja, Bože zdravlja, Bože zdravlja" (It is a great luck that the autonomic nervous system exists I don't have to check my heart rate My heart beats, my heart beats on its own God give me health)…

When individuals are left alone to take care of themselves, they find relief in the fact that there is at least something they are not responsible for, which they do not have to control. Modern society is based on the transfer of trust. And today, often, that transfer and that trust are in question. So as far as I'm concerned, I believe in nature, I trust the structure of nature.

Is there a connection between the double message in your song "Umetnica mora/ može biti zdrava" (The artist must/ can be healthy) and the well-known performance by Marina Abramovic who repeats “Art/Artist must be beautiful ” while combing her hair?

Her work, which I consciously reference, was useful as a background to emphasise the pressure that exists on the issue of maintaining a healthy body, and I could say even young... The artist must be healthy, also because we are left to ourselves. The "must" therefore refers to the pressure that exists to do something to stay healthy, a sort of repression I would say. The "can" instead refers to common sense. Health is regarded as a life value and requires huge expenses. We talk about health as something that is completely under our control, only if we do this or buy that, we follow a new trend, we listen to that advice... The assumption that "We must be healthy" puts pressure on us and frightens us; on the other hand, it is possible to develop an attitude of common sense in which health is in some way under our control and for which, consequently, illness and ultimately death are accepted with less fear.

In another passage you say "O kako da me prate Da o meni brinu Umetnica je nevidljiva" (How do they follow me The Artist is invisible to take care of me) and then you admit that you do not have health insurance yourself (Nemam knjižicu). Is it true?

Health insurance in the song is a metaphor for insecurity, for feeling unprotected and defenceless. My personal situation is not that important, although it is true that I do not have health insurance as the Serbian healthcare system does not provide free healthcare to artists. So we are invisible and I wonder who will take care of me. Health is nowadays given a very high value and the message that health equals youth is also conveyed in a bizarre way. On the one hand, we are bewildered by a mountain of proven and unsubstantiated things that promise health. By following them, we enter the vast field of consumption and pay out of our own pockets as the support of the national healthcare system is scarce and healthcare is becoming increasingly inaccessible and expensive. Even with health insurance, we are therefore in a situation where more often than not we have to pay a lot to do any type of exam. And not everyone can afford it.

What kind of reaction do you expect from the public in Italy?

We will not translate the text and we will sing in Serbian without subtitles, as unfortunately they are not allowed; I hope that we will be able to keep the attention of the public who will hear the piece for the first time that evening. I do not know what to expect, in principle I do not think about it and do what I feel like doing, no matter how it is received.