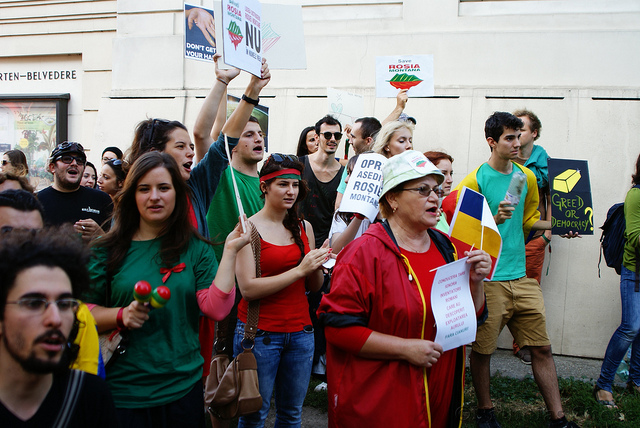 The youth of Romania took to the streets in order to defend the environment against multinational corporations and local politicians. A new generation is the protagonist of Romania’s first social movement since the collapse of communism. An interview with the scholar, Chiara Milan

Romania’s youth appear to have discovered protesting in the streets. Those, who in 1989 were little more than children, with the help of social networks are now fighting against austerity policies and projects exploiting the environment, such as the extraction of gold at Roșia Montană.

Chiara Milan, doctoral candidate in the department of political and social sciences at the European University Institute of Florence, and editor of East Journal , helps us to contextualize this new generation.

The recent demonstrations in Romania signal the entrance of a new generation into the political arena of the country, those born just before or after 1989. Is this the case?

Certainly we are witnessing the birth of a new political consciousness within the new generation. In general, however, the protests that have followed one another in recent years have catalyzed the discontent of an entire population, which, in certain cases, has been forced to choose between the right to work and the right to a dignified life. This is the case, for example, for the inhabitants of Roșia Montană, where the project of reopening a mine has entailed the sale of most of the village’s property to the multinational Gabriel Resources for a laughable price.

That segment of the population which is against habitat destruction and the use of cyanide to extract gold has expressed their solidarity with the protestors, not those who demand that the profits derived from exploiting the land should finish in the pockets of the Romanians instead of a Canadian multinational. In fact, the Romanian state holds only 20% of the stocks of the Roșia Montană Gold Corporation (RMGC), whereas the multinational holds 80%.

In the same way, the 2012 protests, triggered by the attempt to privatize the Smurd, Romania’s emergency services, merged with the massive protests against the austerity measures promoted by president Băsescu and then-prime minister Boc, which, among other things, entailed massive cuts to the salaries of public workers.

The participation of the new generation in the protests was particularly visible in the case of Roșia Montană, given the relative proximity of the village to the city of Cluj-Napoca, seat of one of the most prestigious Romanian universities. Over a period of several years, the students of Cluj and its environs have contributed to the protests by organizing several initiatives to support the campaign, “Save Roșia Montană.” Several actions, such as “photobombing,” have significantly increased the visibility of the movement. What’s more, flags with the logo of the campaign fluttered in every Romanian square during the demonstrations of winter 2012.

All of these protests have left a significant political imprint. The protestors clearly marshaled themselves against president Traian Băsescu, demanding his immediate resignation. Of course, Băsescu has always declared himself favourable to the extraction of gold from Roșia Montană’s mines in order to pay off the debts that the country incurred with the International Monetary Fund. In addition, the protestors have openly condemned the position taken by president Victor Ponta. Initially against the reopening of the mine, once elected, in May 2012, he declared it a possibility. The youth took to the streets to protest against a corrupt political class that does not represent it.

In the spirit of “Occupy Wall Street”, the movement has found a privileged forum in social networks. What has been the importance of social media?

It has been fundamental for the development and the spread of the movements. Ever since the so-called Arab Spring protests, Facebook and Twitter have offered a stimulus to the demonstrations and have contributed by releasing information not reported by the traditional media.

The tangible proof that social media has become a privileged instrument for the spread of the conflict, and therefore potentially dangerous for the powers that be, was the recent decision by Prime Minister Erdoğan to shut down Twitter in Turkey. Even Eastern Europe has born witness to the power of this medium: the protests to save Picin Park in Banja Luka in June 2012 assumed a massive dimension after the invitation to occupy the park to protest cutting down its trees was disseminated on Facebook. At the same time, news about what was happening at Gezi Park was sent out to the entire world via Twitter and Facebook.

If, on the one hand, social media can act as a platform for the protest movements, on the other hand, it also presents the risk of dampening the protests, especially in those countries which do not have a tradition of massive protests. Sometimes it is far easier to simply “like” something, instead going out to protest in an active manner.

The protests for Roșia Montană brought thousands of Romanians into the streets, while at the same time fashioning a strong online presence under the hashtag #unitisalvam. Is the web the new agora of this movement?

The protests in defense of the village of Roșia Montană gave birth to what has been called the first post-communist Romanian social movement. Social Media has definitely contributed to their spread. It enabled the sizeable mobilization in the fall of 2013, with protests that took place not only in Romania but also all across the world.

The Romanian political elites were caught unprepared. Contrary to many other countries, Romania does not have a tradition of massive protests. This is the legacy of a communist regime that prohibited any form of dissent. In fact, the last sizeable demonstrations took place in 1989, and led to the fall of Ceaușescu’s government.

The movement is not structured, in the sense that in its not organized in a hierarchical manner. Nevertheless, this does not mean that it is an apolitical movement. Rather, it is free from party allegiances. Those political parties that have sought to appropriate the protests by supporting the protestors have received a tidy rejection. However, we shouldn’t undervalue the political dimensions of the protests. The message shouted from the streets is clear. A corrupt political class, that has sold the natural resources of its own territory to foreign multinationals (beyond Roșia Montană, other hot zones are the mines of Certej and the zone of Pungesti, where the American multinational Chevron has obtained permission to bore the terrain in search of shale gas), and has starved its own population with austerity measures, is being condemned by its citizens.

The web, on the other hand, has facilitated both the national and the transnational spread of the protests, saving the movement from oblivion. In fact, the Romanian media has preferred not to give prominence to the protests. It has acted instead as a mouthpiece for the RMGC, broadcasting commercials for the company on national television, instead of informing the citizens about what is occurring in the streets of the country.

How will this all matter for the upcoming European elections?

The percentage of Romanian voters who participated in the European Elections in 2009 was extremely low at 27.67%. According to the results of recent polls, there is no expectation of a sudden boom in voters for the upcoming European Elections. The Romanian people continue to be tepid, if not entirely disinterested, in the election of their own representatives in Europe. Although social discontent has risen, I do no think that this will correspond to a renewed faith in European institutions and therefore to an increase in the percentage of voters.