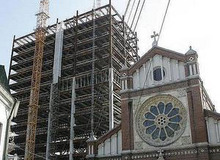 Mad concrete in Bucharest - the Cathedral of St. Joseph

The second round of local elections in Bucharest brought victory to the independent candidate Sorin Oprescu. The mayor-elect will have to come to grips with the serious problems of an overpopulated city, which has less green space, more illegal construction, and traffic at the verge of collapse

For the first time, the capital Bucharest has an independent mayor, in addition to the six district presidents affiliated to political parties.

Sorin Oprescu, a surgeon by vocation, won 56.55% of the vote and became the first citizen of Bucharest. His rival from the Liberal Democrats, Vasile Blaga, was openly supported by President Traian Basescu, but only received 43.45%.

This was Oprescu's third attempt at the mayor's office. In 2000, he lost the election by a margin of 1.38% when he ran against Traian Basescu who was elected president of Romania in 2004.

A few weeks before the elections, Oprescu decided to run as an independent and left his Social Democrat Party (PSD), which opted to support another candidate. In the second round, however, he received the support of several parties, including his native PSD.

Now, however, Oprescu promises he would not return to the Social Democrats, but since the people of Bucharest voted for him as in independent, he would remain an independent mayor,

Immediately upon his election, Oprescu stated, "For the first time, the majority of the people's vote went to an independent mayor of the capital."

Running as an independent was not easy. Oprescu had to fight his opponents' arguments, who claimed that a mayor not affiliated with a political party could not work with an antagonistic and party-dominated city council. Yet, the "independent" brand brought him victory.

Political analyst Cristian Parvulescu observed that, from the beginning of his most recent campaign, Oprescu had come to be seen as an alternative to the continuous quarrels among political parties. This had made attacks from his opponents seem even more unjust.

In addition to having to struggle with city councillors loyal to their parties (who said they would support projects benefiting the development of the city), Oprescu will be in charge of a metropolis drowning in problems.

According to a recent report by the association "Save Bucharest", the Romanian capital is suffering from traffic chaos, lack of green area and of vandalism against historic monuments. The Catholic cathedral St. Joseph has been a victim of vandals.

Nicusor Dan of the "Save Bucharest" association, said to the press that he did not consider it normal that "everybody goes to the office with their cars". Instead, Nicusor suggested that public transport should be the primary option for the two million residents of the capital.

Yet, public transportation lines are only rarely interconnected and the subway network is insufficient. Traffic also worsened due to buildings and offices constructed in the overpopulated centre. Building permits issued for already congested areas created the "impossible" traffic chaos.

Overall, Bucharest is a city choked by traffic - even the Prime Minister sometimes prefers to go to the office by motorbike in order to arrive on time - and "boasts" the image of being the most polluted capital in the EU.

According to the 'Save Bucharest" study, in such conditions pedestrians are faster than the cars stuck in traffic. The average speed in the centre has declined from 15 kilometres per hour in 2000 to less than 10 kilometres per hour in 2006. In these awful conditions, even ambulances cannot make it in time. The average ambulance-arrival time fell from 12 minutes in 2002 to 18 in 2005, and 35 minutes in 2006. According to "Save Bucharest", this is one of the factors for the rise of mortality in the capital.

With regards to pollution, the annual average level of azoth dioxide has greatly exceeded the allowed maximum. Benzene and dust, two factors which increase the risk of leukaemia and respiratory and heart diseases, also exceed safe levels.

The solution, according to the initiators of the project, would require the involvement of civil society and pressure on authorities to change the current legislation.

Many architects have been accusing the mayors of the Bucharest districts, the city councillors, and the urban planners of having illegally approved projects, which suffocate the city. Connections, bribes, and similar practices of corruption are used to gain construction permits for ten-story buildings in neighbourhoods with single-story houses, or to tear down buildings without the owner's knowledge because the land is worth more than the structures themselves.

The "Save Bucharest" association reports acts of aggression against historic monuments, industrial heritage, sites of architectural value, the demolition of houses and traditional markets.

On the one hand, supermarkets are definitely profitable. They sprawl around the city, many open around the clock, including on holidays. Most of the old, authentic buildings are, on the other hand, "covered" by new tall constructions, thanks to a chaotic urban plan dictated by the financial interest of big companies.

Because of the legislation that turns green spaces into construction sites, Bucharest had less than 1,500 hectares of green space in 2007, down from 3,500 back in 1989. Now, some neighbourhoods do not have even a single park, children must play between the buildings.

These are only some of the problems faced by Bucharest, the capital of the seventh most populous EU country.

Although much development is underway, and many streets are being repaired, work is only just starting. In some of the outlying areas, private houses do not have running water. Streets are not asphalted. When it rains, the mud is worse than in the countryside.

The incoming mayor Oprescu, who has met with Liberal party Prime Minister Calin Popescu Tariceanu in order to get his support for some development projects in the capital, will have to address and find solutions to all of these problems.

True, at least in regards to traffic and pollution, the Prime Minister shares the same boat as his fellow citizens.