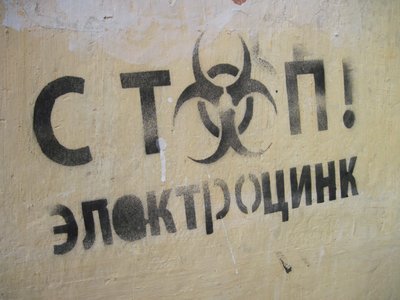 On the walls in Vladikavkaz – Photo by G. Comai

The citizens of Vladikavkaz are protesting against Elektrozink, a metallurgical factory known for its toxic emissions. Worries for health and environment, though, clash with the difficulties of closing the main plant in the region that gives work to over 2000 people

On January 23rd 2010, the citizens of Vladikavkaz marched for the umpteenth time in protest, asking for the closure of the sadly known metallurgical factory Elektrozink. The demonstrators poured out into the streets of the city and marched along the very central Peace Avenue, carrying banners and signs against the plant that for so many years has been poisoning the city and the surrounding areas with its dangerous emissions of toxic substances.

The organisers of the demonstration had obtained all the necessary authorizations, including the permit issued by the police headquarters. The march was to end in Freedom Square, where the seat of the Government of the Republic of North Ossetia-Alania is located. The demonstrators covered Peace Avenue screaming protest slogans like ''Stop Elektrozink'', ''No more deaths'' and others.

None of the protesters, however, was able to get into Freedom Square: the police lined up to form a wall to block the road to the demonstrators, who couldn't protest directly outside the windows of the local government. Showing the authorization issued by the police headquarters was for naught and the resonant protests of the demonstrators fell on deaf ears also.

As one of the organizers of the march commented, ''Freedom in Vladikavkaz ended in Freedom Square''.

Environmental safeguard is a subject that has long been heart-felt by the people, not only in Vladikavkaz, but also around the world. There is a growing perception that indifference and inertia towards these problems can be very dangerous for people’s health and lives.

What has aroused ever-growing worry among the citizens of Vladikavkaz lately is the Elektrozink plant, where zinc, lead, cadmium, sulphuric acid and other substances deriving from the processing of polymetal minerals are produced.

The foundation stone of the plant was laid in 1898 and production began in 1901. At the time, the factory was on the outer suburbs of Vladikavkaz but, as the city lines extended, it ended up in the middle of the residential area. The soil, air and water next to the factory are contaminated by the emissions and processing waste produced by the factory.

According to Ivan Alborov, Professor of Environmental Sciences at the Research Institute of Mining and Chemical Raw Materials of Vladikavkaz, Elektrozink represents the main source of pollution in the city. Alborov has told IWPR, a known information portal, that 8 years ago a medical research was carried out, whereby samples of hair were collected from children attending a kindergarten in the immediate vicinity of the factory. Apparently, the analyses reported the presence of lead in quantities 10 times higher than the maximum tolerable concentration. These data are certainly indicative of how much lead is absorbed by the citizens of Vladikavkaz in general.

“I live two blocks away from Elektrozink and I’ve gotten used to the smell, I don’t even take notice of it”, says Džulietta, a 23-year old student from Vladikavkaz. “But when someone comes to visit me, they immediately complain about the smell”.

It is a common belief that whoever works in Elektrozink for longer than a year runs the risk of catching illnesses, also permanent ones. Tens of thousands of citizens in the Republic of North Ossetia-Alania, even those who do not come in direct contact with the factory, often end up catching serious diseases or even incurable ones: diabetes, asthma, bronchitis, allergies, male and female sterility, high fetus mortality, premature births. Other pathologies, including arteriosclerosis, arrhythmia, high blood pressure and tumours seem to be particularly common due to Elektrozink .

Even though as early as in 2003 an order to close the factory was issued, the plant continued to function uninterruptedly. UGMK, an important Russian steel company, bought the plant in 2007 and informed of having invested considerable amounts of money to improve Elektrozink ’s environmental standards. Nonetheless, even after the introduction of these improved techniques serious environmental incidents have occurred.

On 25th October 2009, the umpteenth dense toxic cloud composed of reddish powders rose up from the factory. “They are poisoning us, without a shadow of doubt” says Khasan Dzutsev, director of the North-Ossetian Center for Social Research and Professor at the Vladikavkaz State University. “The local authorities will not allow the closing of Elektrozink and leave over 2000 people jobless. Our directors are perfectly aware that if it should close, many would come here to protest and throw stones at the Government headquarters”.

The inhabitants of the villages located on the line of the winds coming from Elektrozink also complain about their lands, once fertile and rich in beneficial substances, no longer being able to be harvested. The fruit and vegetables produced in these areas, moreover, often look diseased. This is caused by the saline substances deriving from the working of heavy metals, apparently present in concentrations far higher than what is allowed by the environmental legislation.

On 19th December 2009 the citizens, exasperated, organized a protest and asked the Ossetian authorities to close the factory. To show solidarity to the demonstrators, a similar protest was organized in Moscow. The numerous “Stop Elektrozink” writings on the city walls bear witness to the protest.

Notwithstanding the numerous complaints, the accusations in court, the marches and other protests, finding a solution to such a complex situation is not at all easy. The closure of the huge plant would, as a matter of fact, cause a series of problems, not least unemployment, whose rate is already quite high. Indeed, it must not be forgotten that Elektrozink guarantees work to over 2000 people. Elektrozink also plays a particularly important role in Russian economy: according to the organizers of the demonstration, the Vladikavkaz plant accounts for 40% of the production of zinc in Russia and for 70% of lead.

The issue thus remains open and it seems very likely for new protests to be organized as long as toxic emissions and incidents keep occurring.