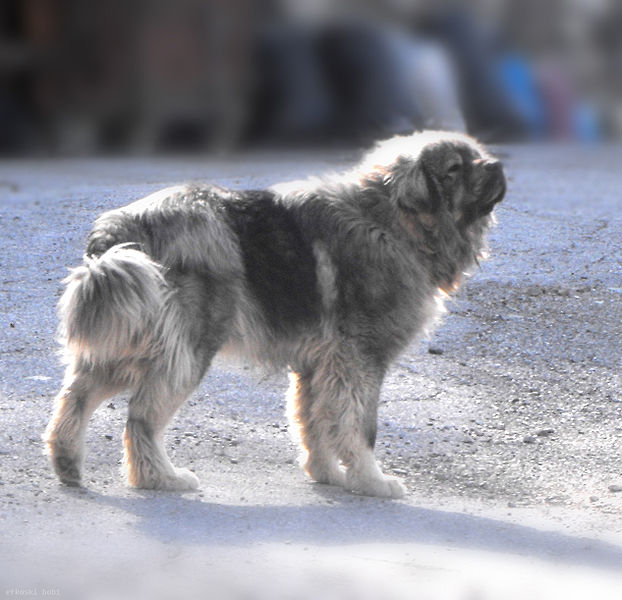 He has been guarding sheep and shepherds' families around the Balkans for centuries. When Macedonia became independent in 1991, the Shara mountain sheepdog was given a place on the new Macedonian one denar coin

This dog is robust, strong and, according to stories of the elderly, the only dog that can confront a wolf alone and actually come out as the winner. When Macedonia became independent in 1991, this dog was quietly honored for his services by being given a place on the new national currency. Take any Macedonian one denar coin and you will see him: the Shara Mountain Dog. In the Macedonian language, he is called "sharplaninec." Albanians call him "qen i sharrit."

He is a big chap. The male is around 50-60 centimeters tall and weighs 50 kilograms on average but can often get much larger. Make no mistake about it: you don't want him getting cross with you. But if you are a child, you could probably pull his fluffy tail and try to ride him and he would patiently obey. At least this is what owners say. Your correspondent has never tried it. I had one when I was about seven and was usually intimidated by the sheer power of the animal. The leash was for him to drag me around, not the opposite. When it became clear that the postman would never be able to comfortably enter the yard to deliver mail, and after an occasion when he lost a slice of his trousers (luckily nothing more), Murgo, as he was called, was sent up on Kozuv mountain where he could joyfully run around with a big herd of sheep. It became his role so naturally.

Experts say the Sharo (a traditional name for a Shara Mountain dog) does not need any training for his traditional occupation: that of being a sheepdog. It is something he has in his genes and is able to do instinctively. But he has not only strength and courage to confront a fierce enemy, a bear even (a fight usually fatal for Sharo), they say he is also smart. After he began to be systematically bred in the 1950s and 1960s, he became more popular. Macedonian migrants took the Sharo abroad.

The story has it that experiments have been run with Sharos in the US to see how they would cope with coyote attacks. Allegedly, the coyotes use a strategy whereby one group lures the sheepdogs away and another sets in and kills the livestock. The Sharo would not be fooled, though. He stuck by his flock. It could be that this is just a story, but it is one inspired by gratitude. Venturing into the Macedonian mountains of Shara, Korab, Bistra, and Stogovo, the shepherds there will have plenty of stories to tell about their inseparable and loyal friend.

The Ottomans, who stayed in what is today Macedonia for five centuries, kept the so-called "defters," records of households, people and livestock for tax-collecting purposes. One of these defters recorded that in the year 1901, in the area of Galičnik alone (a region in today's southwest Macedonia), there were 12,000 sheep and 700 Sharos.

Organized classification and care of canines began in the Kingdom of Yugoslavia in the 1920 and 30s. The Shara Mountain sheepdog was first presented at a canine exhibit in 1926 in Ljubljana and was officially registered with the Federation Cynologique Internationale under entry no. 41 in 1939.

With more systematic canine breeding after World War II, the Shara Mountain sheepdog became more popular as a breed. Some Sharo were brought down to the cities from their previously exclusive domain: the mountains. Efforts were made to purify the breed. Records suggest that credit goes to the Yugoslav National Army (JNA) for the popularization and development of the Shara Mountain sheepdog. It was the JNA which often used the Sharo as a service dog and bred him in its canine centers. Many private breeding centers specializing in breeding Sharos have opened up in more recent years. There are several well-known breeding facilities in Macedonia at present. Many can also be found in Kosovo and Serbia.

Owners and breeders describe the Sharo as extremely loyal to the family and distrustful of strangers. They say he tends to remain exclusively loyal to only one master during his lifetime and that he is very protective of children. His intelligence is sometimes interpreted as hard-headedness, as he can question orders which, according to experts, he might find doubtful. He sheds his thick fur in summer and likes the shade. As mountain sheepfolds are his natural habitat, he has a taste for mush and cheese - the same menu his masters enjoy. His talent as a sheepdog is proverbial. Another story which glorifies his wits says one Sharo knew all of his master's cows by name. The master would tell him, "go bring Milica" and he would go and bring her. He could do the same with those named Slavica and Brankica and all the other dozen cows. If he loves you, his fans say, he will try to amuse you and get your attention but if he hates you, just stay away.

It could be that some of the stories about Sharo are just myths, but that's OK. He deserves respect. He has been the noble guardian of rural life in the Balkan mountains for centuries. No one should doubt that a lot of the stories are also true. The selection of short video stories about Sharo on YouTube features one chilling scene (obviously authentic) with black and white footage of a wolf entering a sheepfold somewhere in the Balkans and starting his bloody feast while terrified lambs huddle in the corner. Their survival (and often the family's subsistence) depends on the Sharo arriving on time. And he does. "He is not for sale, oh no sir, not even for a million" says the moved owner Ismailji of Karabasha the Sharo's name as he prevails over the wolf in the documentary.

In 1999 the Macedonian Post honored the Sharo by issuing a stamp with his picture.