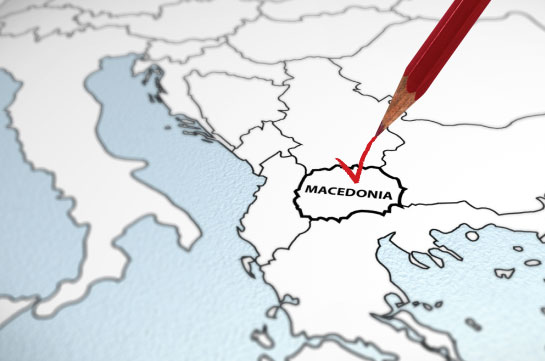 Identifying the very low level of foreign direct investment as one of the serious causes of the slow growth of the local economy, the Macedonian government launched an aggressive campaign aimed at attracting foreign businesses to "Discover the New Business Heaven in Europe": Macedonia

Identifying the very low level of foreign direct investment as one of the serious causes of the slow growth of the Macedonian economy, the government set out to bring radical changes.

It wants to achieve this by huge reduction of taxes, substantial incentives for foreign companies, and strong direct outreach to businesses. For the latter the government launched a campaign in the world's leading business and finance media, such as The Economist, Financial Times, etc., and is hiring internationally renowned consultancies to go around and lobby businesses to invest in Macedonia.

By lowering the profit and the personal income tax to a flat rate of 10% starting 2008, (transitional 12% in 2007, down from 18%), the government is trying to re-brand the country as the place in Europe with lowest taxes.

That some of this is partially successful perhaps prove reactions coming from the EU or Member States. The Commission is setting out to inspect whether the huge incentives (free land for businesses, exemption from public tenders for big foreign companies) the government offers are in fact in breach of the rules providing a level playing field. A recent debate in the French Parliament, as reported by Macedonian media, pointed to Macedonia's effort to boost its competitiveness through low taxes and labor costs, as the "new Polish plumber".

The government marked the launch of the campaign by literally launching a zeppelin above the government head office, reading "Invest in Macedonia".

Will it work? Or will it remain a "hot air balloon" as so many other dramatically advertised reforms in the country?

There are indications that something is moving. But there is a lot of skepticism too.

A lot has been written on Macedonia's poor capacity to attract foreign direct investment (FDI).

The country had some 116 million USD of FDI in 2005 (for comparison, Albania had some 260 million), some 22 million down from 2004. It holds convincingly the bottom of the list in the wider SEE (Romania - 6,3 billion; Bulgaria - 2,2 billion; Croatia - 1,6 billion; Serbia and Montenegro - 1,4 billion; Bosnia - 300 million). If looked in a wider time perspective, from the beginning of transition, the situation is the same; it ranks last with some 1,4 billion USD over 15 years, half of which accounts for on the controversial sales of two large companies, the telecom and the power utility.

International rankings of countries good for investing regularly give low rating to Macedonia. "Risky to work in Macedonia and to make deals with Macedonian companies"; "Macedonia - just for the brave investors", are only some of the descriptions to be found in international investment guides.

Why nobody wants to invest in Macedonia?

"I would say the major obstacle is the public administration, which at the moment is not up to the challenge; it doesn't have the capacity, and maybe this is the reason so many negotiations with potential foreign investors have failed" says a foreign expert, assigned to build the capacity of a government agency setup to bring in FDI.

The country is small, the market is tiny; it has a slow, corrupt and inefficient bureaucracy, and a recent experience of conflict.

What more, foreign investment was often actively discouraged in the past. The privatization model Macedonia chose in the early 90s opted for an insider-buy out, whereby managers (who didn't have the cash) were given the chance to privatize most of the companies. Only what happened was that they often couldn't run them in the changed business conditions. The process became a huge generator of corruption. Very little hard cash flowed in.

Often were big foreign companies who saw an investment opportunity in the country, discouraged by entrenched local interests, who could easily manage to slow them down in the murky labyrinths of Macedonian bureaucracy.

And often was sheer incompetence.

Recently the mayor of Gevgelija, Mr. Dragi Delev, town just next to the Greek border, which has been growing into a regional casino cluster, complained to the media that the community is losing potential 200 million Euro of Greek investment because the central government is too slow in giving construction land to investors. Construction land is still a central government competence.

Many say that lower taxes alone will not bring in foreign money. Issues of legal certainty and property rights, transparent administration are equally if not more important.

"You also need other things", says professor Vlado Dimovski from the University in Ljubljana, and former advisor to the Macedonian government at the time of the social-democrats, "first, you need a clear strategy, which sectors, in what way, and with what dynamics; second, land ownership is crucial. Some investments failed exactly because of unsettled land ownership".

"The fiscal policy is not the main factor", says Mr. Gligor Taskovic, deputy Prime Minister in charge of FDI. With his relevant international business experience, he is one of the government's top guns for luring businesses in. "For companies it is more important to find the right space where to work and to find qualified labor", adds Mr. Taskovic.

"According to Mr. Libor Krkoska, EBRD expert, "the rate of the taxes is less important than the transparency and the administration of the fiscal policy".

Everybody agrees on that point. Successive Macedonian government have been in the habit of continuously changing tax legislation, creating a climate with very little predictability. It is akin to planting one type of plants and soon after changing your mind and uprooting them, say economists.

Some progress can be noted. A big US company, Johnson Controls, is building a production plant in the free economic zone Bunardzik, near Skopje; a UK car parts manufacturer announced opening a production unit in Macedonia.

But it will take more, a lot more, to show it is not just a balloon.