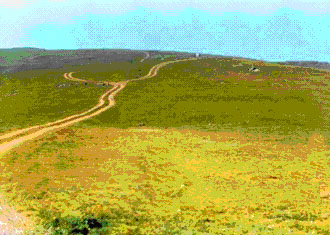 Buzz of a possible partition of Kosovo rises new worries about Macedonia's stability, while new signs of tension are witnessed in the region, even if the authorities in Skopje claim that, at the moment, there are no immediate threats to the national security

President Branko Crvenkovski convened the state security council last week in order to assess the latest security developments in the region. This follows after the regional commotion caused by the "discourse of partition", launched recently in international fore, concerning the final status of Kosovo.

There is no threat to the Macedonian national security, concluded the president's security council. It also made clear the position of Macedonia - the country opposes partition of the province.

Used to nod to everything that comes from the West, it took Macedonian politicians a while to do their math and construct a position. Political analysts preceded them.

Professor Vlado Popovski from the Faculty of Law, and currently advisor to the prime minister, was prompt to warn that partition of Kosovo would be a serious threat to Macedonia; it could lead to suspension of the Ohrid Framework Agreement and demands for federalization.

Professor Denko Malevski, former ambassador to the UN said that partition of Kosovo would be akin to "crushing centuries of Balkan history on our heads".

"There is no serious security threat to our country at the moment", says interior minister Gordana Jankulovska, "given the developments in the region, we monitor the situation closely and if necessary we will act".

Yet, too much is going on to be simply dismissed as business as usual. Is it too far to speculate that merely the buzz of the word "partition" can have such an effect in the region?

Clearly, there are those who feel that they can gain from raising the tension. And calling it a coincidence is turning a blind eye.

A few days ago a group of seven inmates escaped from the high security prison Dubrava in Kosovo. They were led by Mr. Lirim Jakupi known as "Nazi", one of the former leaders of the liberation army of Presevo, Medvedja, and Bujanovac in Southern Serbia.

Mr. Jakupi is also wanted in Macedonia together with his fellow fugitive Ramadan Shiti, for wounding three policemen in 2004, killing of a cab driver, and a bomb attack on a police headquarters in Bitpazar, Skopje. Mr. Jakupi was also one of the leaders of the armed group that had occupied the village of Kondovo near Skopje in 2004. Together with commander "Nazi" and Mr. Shiti is one other man wanted by Macedonian authorities, Dzavid Morina known as commander "Drenica", former NLA leader, charged in connection with the killing of two policemen in Gostivar in 2002.

Kosovo authorities asked for help in apprehending the fugitives from the Macedonian government. Albanian and Serb police are also on high alert.

Simultaneously, another former Albanian commander fled prison, this time in Macedonia. Mr. Dzemail Iseni, known as commander "Jamey Shay" was given a leave from the prison of Idrizovo last week to attend the funeral of his mother. He was sentenced to seven years, back in 2005, for planting bombs on the Kumanovo city square and the railroad Skopje - Belgrade. After the funeral service, commander "Shay" used a human shield of his friends and relatives to prevent policemen from taking him back.

Both breakouts appear to have had logistical support both from inside and outside the prisons. Kosovo authorities arrested several prison guards, and Macedonian police is considering the same.

At the same time, a multitude of incidents are registered: a pile of explosives discovered in Kosovo; armed groups spotted in southern Serbia; shots fired at a sentinel on the Macedonian - Albanian border; a house in the village of Brnjarci (right on the road to Aracinovo, a major battle field in the 2001 conflict) shattered by bullets.

Security analysts say none of this is coincidental. It is part of a scenario to heighten tensions ahead of the run up in the Kosovo negotiations. The option that at least some of it, or perhaps a lot, as to do with the "partition" fuss needs to seriously be considered.

But are all of these events orchestrated by the same conductor?

Another former commander seized the day this week, to launch an agenda. Mr. Xhezair Sakiri alias commander "Hoxha" announced the other day that the border village of Tanusevci (where Macedonian conflict started in 2001) will run a referendum for seceding from Macedonia and joining Kosovo. The reason is, he says, that the villagers feel neglected and harassed by Macedonian authorities.

The village is said not to be controlled by Macedonian police, and to be the hiding place of the fugitives. Yet, commander Hoxha denies this.

"The fugitives are not here and if they appear, we won't let them in". He adds however that the village has its own armed force and that the police will not be allowed to enter either.

Interior minister Jankulovska responded by saying that "Police have showed that they can enter anywhere there is the need to do so".

Simultaneously the region of Tetovo woke up with graffiti "Republic of Ilirida".

Clearly, a lot is going on, despite the soothing tone of the state security council that there is no imminent security threat.

"Each country in the region must be prepared for a variety of possible scenarios", says Mr. Ibraim Mehmeti, political analyst.

"If NATO does not enlarge next April, and the countries from the region do not enter, they could suffer destabilization." , adds Mr. Gocevski.

Likewise, the International Crisis Group (ICG) warned last week that Kosovo is a time bomb ticking in the hands of the EU.

It is logical to expect that tension will continue to rise in the next period. In between secession referenda and fugitive commanders, it might turn to be a hot autumn.

At least some of what is going on is damage of the talk of partition, and it should be a lesson.