Symβiosis: Greece after the shutdown 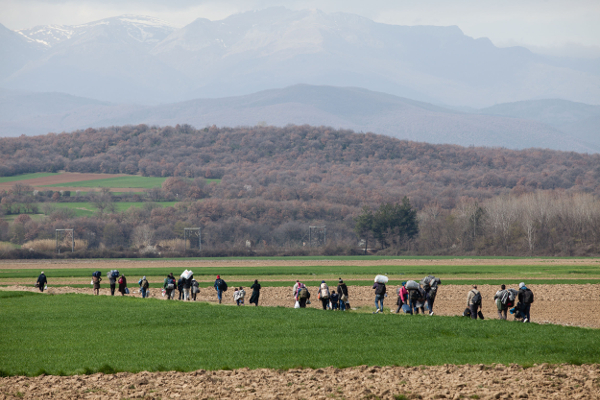 The Balkan route shutdown is prompting a humanitarian crisis in Greece. The situation in the north of the country: interview with Despina Syrri

Despina Syrri  is one of the founders of Symβiosis , a non-governmental organisation based in Thessaloniki supporting the political, economic and social integration of migrants, refugees and vulnerable communities

What is the situation in Greece, and in the Thessaloniki area in particular?

Since the borders were closed, the number of people trapped in Greece increases every day. There are about 40,000 people, to speak only of those who arrived in recent weeks. Then there are about 3,000 new daily arrivals in the islands. All this is creating an acute humanitarian crisis. Right now the weather is bad – cold and raining. Idomeni, with over 14,000 people, has become a swamp. The situation is difficult in the Piraeus too, where refugees disembark, and where they created a tent city while waiting to go north. The situation can easily become tragic, both in Idomeni and Athens, many people have no shelter. I wonder if European leaders know that in places like Syria or Iraq the healthcare system has collapsed years ago, that here there are children who are not covered against illnesses that had longtime been defeated, like polio, and that in these conditions there are serious risks to their health.

How is Greek society reacting to the crisis of migrants?

The Greek state is lacking with regard to the creation of infrastructures. Of course, not much can be expected. Under the present conditions of economic crisis and huge unemployment, the state's ability to respond to this emergency is limited. An inflow of thousands of refugees in a few days requires quick responses – setting up facilities, recruiting and training people – and this happens only in part. The response of Greek society, however, has been overwhelmingly positive. There are volunteers of all ages in every region of the country, not only in large urban centres. They bring food, organise activities for children.

How many people are we talking about?

What are the main organisations and how do they organise?

I'm not just talking about organisations. There are many individuals and families that go to help, bringing what they have. There are coordination committees in all cities. Here in Thessaloniki, for example, there are at least 60 organisations that try to split up the work and help out in the new camp that was created not far from the city, Diavata.

When was it created?

Three weeks ago. On the opening day, the officer told soldiers preparing to welcome the first refugees not to forget that their grandparents had to face the same sufferings, and that this could have happened to them also – so, to smile and do their best.

What is the attitude of the media?

The media speak mainly of personal, human stories, generally there has been no xenophobia in the media.

What about Golden Dawn?

At the moment, it is not very visible in the public space.

Is the issue of migrants making the government's task more difficult, in this difficult economic situation for Greece?

The point is not how the crisis will affect the government. We in Greece are rather wondering how other European countries can show such hostile and xenophobic attitudes, and close off the borders. Obviously, confidence in Europe is eroding. Perhaps, it is more correct to say that a large part of the public opinion in Greece at this time believes that we are the ones who are defending the true values ​​of Europe. This feeling is increasingly emerging, in public discourse, that there are EU member countries that violate European values, and do not respect human rights.

What will happen to the people who remained in Greece?

Migrants and refugees are only just beginning to realise that the Balkan route is closed. Migration flows, however, are like water, you cannot stop them. They will find other ways, albeit more dangerous and difficult. Many, of course, will remain. If repatriations will take place, it will be in the framework of the agreements made by the Union. On this, Greece, as an EU country, cannot decide alone. Many will ask for asylum in Greece, at least temporarily, until the countries of origin will be safe. But no one can predict when Syria, Iraq, or Afghanistan will be safe.

Education and employment are the challenges. In Greece, irregular migrants and asylum seekers have the right to send their children to school, asylum seekers can also work. In Diavata, for example, there are 700 children who must go to school. Sure, it's an uncertain situation, the families hope to leave, but for the moment it is not possible. We are still in a phase of initial accommodation – trying to provide these people with food, shelter, and basic healthcare. This is the situation now. Of course, you have to start thinking about the second phase.

Has the refugee crisis changed the relations between Greece and Turkey?

I would not say so. There is a certain choreography of relations between Greece and Turkey, based on some commonly accepted narratives...

I speak of Greek society, but the right hand cannot do without the left. There are positive and negative stereotypes and narratives, that hold up regardless of the crisis. Within the same speech you can hear about the hospitality shown by the Turks, who have welcomed millions of refugees, and about the role played by the Turkish mafia, according to some with the connivance of institutions, in the transport of refugees to the Greek islands. The crisis has not changed the narratives – if anything, it has strengthened them.

What do you think of Europe's attitude in the management of this crisis?

What strikes me the most is the absence of a coordinated response from European civil society on this issue, which today concerns us, but tomorrow will involve someone else. There are huge problems that must be addressed, such as the violation of international laws on humanitarian protection committed by European countries. And I am surprised by the fact that non-governmental organisations and civil society lobbies in Brussels are turning a blind eye. It is as if they did not realise what is going on.