Revythoussa, the islet of gas 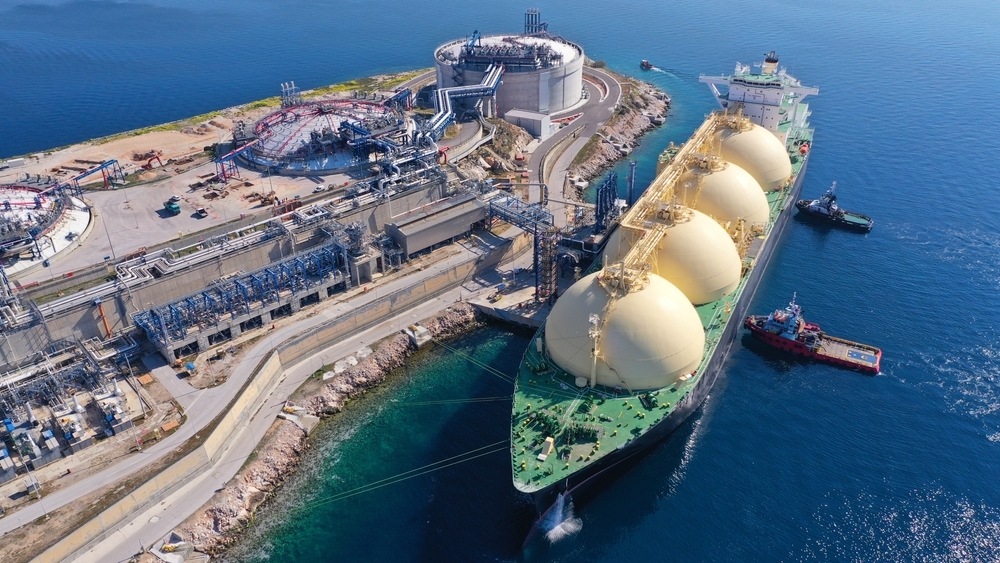 Τhe islet of Revythoussa is a small, barren piece of land in the Gulf of Megara, west of Athens. There would be nothing special about this place, except it has become the only LNG terminal in Greece and a strategic energy stronghold for the wider Balkan region

Last April, amid an imminent energy crisis, the Revythoussa station got upgraded with the support of the EU NSRF funds. With 9 cargoes of NLG being expected in November, many speak of the islet’s strategic role in safeguarding energy security in Greece and the Balkans in light of the EU’s efforts to find viable alternative solutions to Russian natural gas.

“The opening of the LNG facilities in Revythoussa strengthens the reliability of the natural gas system since it offers an alternative solution to Russian gas”. This is what Savvas Papafilippou, former CEO of DEPA (Public Gas Corporation of Greece), said to Greek newspaper To Vima on the inauguration of the very first NLG station in Greece. Although this phrase resonates with today’s reality and European efforts to break dependence on Russian energy, the statement was made, quite prophetically in fact, in November 2008.

That was a time when Greece had no plan of interrupting its power-driven cooperation with its friend and ally, Russia. It had been less than a decade since the long-awaited arrival of the first Russian natural gas in Greece, namely the city of Thessaloniki (1996). Following years of negotiations with the then USSR Greece, under PASOK leadership, would accomplish a diplomatic victory by agreeing with Moscow on the supply of liquefied natural gas, despite American factors opposing the deal. An interstate agreement with the Soviet Union had been signed in Athens in early October 1987, while another agreement with Algeria would be signed in the Greek capital a few months later, in February 1988.

These rapid developments in the field of energy had led to the inception of the Revythoussa station within Greece’s vision of an upgraded presence in Southeastern Europe. To understand the magnitude of this ambitious project, one should consider that during the first 12 years of its construction, 440 billion Greek drachmas had been spent on the Revythoussa plant, making it the second largest energy-related investment after the one made on the Public Power Corporation (PPC). Just like many other large-scale plans in the country, it took several years for the specific project to come to life. The first, temporary, NLG storage and gasification facility was constructed in 2000. The scheme was upgraded in 2008 and it was finally in 2018 that the Revythoussa terminal was made functional.

In April 2022, the Greek government envisaged the creation of a new, small-scale LNG jetty at the Revythoussa Terminal. The project was included in the "Competitiveness, Entrepreneurship and Innovation 2014-2020” Operational Programme, by decision of Deputy Minister of Development and Investments Ioannis Tsakiris, signed by the Special Secretariat for the Management of ERDF & TA Programmes.

The new floating tank (FSU) was delivered within a few months – surprisingly fast for the local standards. The tank increases the storage capacity of the Revythoussa station by 145,000 cubic metres. Last August, after inspecting the site, Minister of Environment and Energy Kostas Skrekas commented that the Greek government took immediate action so as “to shield the country against the unfavourable scenario of the interruption of the natural gas flow from Russia”. Alongside the new stations in Corinth and Alexandroupolis, Greece becomes a natural gas gateway for the entire Southeast Europe.

Speaking to the National Television of Greece (ERT 11.10.2022), the facility manager, Aristotelis Nastos, explained how Revythoussa has the capacity to ensure the energy sufficiency of the country in liquefied natural gas. Since the beginning of the year, the Revythoussa port has received approximately 4.5 million cubic metres of LNG, which translates to approximately 28 terawatt hours (TWh) of energy.

Ever since the establishment of the plant in 2000, 690 ships of liquefied natural gas have approached and unloaded, while 62 ships have been received since the beginning of 2022. The ratio of liquefied gas to natural gas is about 1 to 600, i.e. one LNG ship corresponds to 600 ships carrying natural gas.

According to Nastos, even in the event of no ship coming, the Revythoussa plant can ensure Greece an energy sufficiency varying from 12 to 15 days with maximum gasification.

A significant advantage of the NLG supply is that it can come from all over the world, unlike the gas pipeline monopoly. The existence of multiple suppliers ensures security of supply thanks to alternative sources. Currently, the Revythoussa port relies mainly on its American supplier, yet there are also cargoes coming from Spain, Algeria, Oman, and Indonesia.