Croatia: we are also indignados 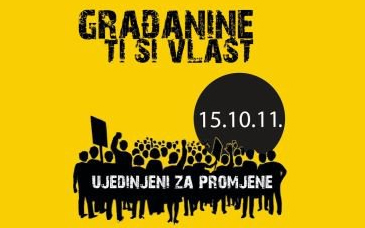 On 15 October, indignados were also demonstrating in Croatian streets. It was a significant event, because Croatians have hardly ever expressed their discontent through public protests. This is an interview with one of the organisers

On Saturday, 15 October, demonstrations took place throughout the world, including Croatia. There were protests in Zagreb, Pula, Split and Rijeka. According to media estimates, 3,000 to 5,000 demonstrators (according to the organisers, 10,000 demonstrators) gathered in the central square of the Croatian capital (Trg Bana Jelačića). Hundreds of demonstrators assembled in other Croatian cities. The movement’s manifesto was published on the Facebook page 15.o (Worldrevolution) in Croatia .

What do you think about the demonstrations that took place on 15 October in Zagreb and in other Croatian cities?

As organisers, we are happy about the participation in demonstrations (according to our estimates, approximately 10,000 were demonstrating). This means a lot to us, because in Croatia, unlike in other countries, there is no tradition of people demonstrating in the streets to express their discontent.

Who organised the demonstration?

The demonstration was organised by a group of ordinary citizens, including working people, the unemployed and students. Five trade unions, several city organisations and NGOs working with protection of human rights supported us, and so did many artists, journalists and actors.

How did the public opinion and politicians react?

Politicians had practically no reactions: politicians have ignored the event, both in Croatia and all over the world. However, we are happy about the media coverage. When there were protests against the current government coalition, state television HRT had ignored the event or had manipulated the figures. Well, in this case, HRT and other media did actually focused on the 15.o movement.

Do you think that your protests can actually influence the political arena, just a few days before the elections?

The demonstrations on October 15 are just the beginning of civil society’s action. Our action is not directly aimed at the current government; in fact, we are concerned about more general issues, such as the fight against corruption and the policies of banks and multinational companies. However, our main goal is more participation of citizens in the decisionmaking process. From the local point of view, because we are in a pre-electoral period, the main message is that we do not only want a change in the government, we are not simply asking the HDZ  (Hrvatska Demokratska Zajednica , the Croatian Democratic Union, a conservative party) government to resign and another coalition to replace it. We are instead asking politicians to change their attitude. We want them to offer concrete solutions, not populism. Reforms currently being debated in Croatia are hard and painful and we do not want our politicians to tell us stories. We want them to explain to us what their agenda is and how they plan to implement it.

What does the concept of direct democracy mean in Croatia and in the rest of the world?

In Croatia, as in the rest of the world, citizens are not happy about the representative democracy system, according to which the people elect politicians, who then forget about the requests made by the voters immediately after having risen to power. The concept of direct democracy has a wide meaning and encompasses different models. There are radical forms of direct democracy, such as assemblies or plenary sessions, where the citizens make their decisions themselves. There are other ways to let the citizens make decisions about issues of public interest such as through referendums.

In the last few years, a new form of activism appeared in Croatia. It was active especially in the fight for the right to free education in universities and for regaining public space. In which stage is Croatian civil society now?

Croatia is a relatively young democracy and we are still building a civil activism. We are working so that citizens are free to express their opinion, not only every four years during elections, but also through demonstrations and other forms of direct democracy. An increasing amount of people is ready to act, to demonstrate, to make their claims and raise their voice, unlike ten years ago. Citizens’ action, even if it is not widespread as in Italy, France or Spain is a process that has just begun, is growing and is certainly destined to last.

What were the main claims of demonstrators at the plenum?

Many requests are the same of the October 15th movement all over the world. We talked about free education, good-quality school system, pension reform, occupation of some specific public spaces such as streets and squares and some institutions, and about a general strike. Moreover, we want to stop the government’s total control of public assets, because those assets, those economic resources, those natural resources do not belong to the government, they belong to all citizens: islands cannot become a private property! Sometimes, there was a connection between the various requests; however, this was our first plenum, probably the first form of expression of its kind for Croatian citizens.

Who are the citizens who decided to demonstrate?

We insisted on using the term “citizen”. We wanted to use a word that is free from ideological, ethnic, religious nuances; in this way, we could bring together various groups of citizens, both leftwing and rightwing, conservative and liberal, pro and against access to the European Union. These citizens acted as one in the streets.

Are you a global network? Are you in touch with other activists in former Yugoslavia?

What will be your next actions?

The students, who organised the plenum, are planning to organise public debates, while various groups of citizens and trade unions are coordinating in order to manage citizens’ requests and organise protests on an even larger scale.

What do you expect for the future?

We live in a global world and all events occurring on the global scale interact are interconnected. We are expecting that the citizens unite and put pressure on the existing political and economic system, both in Croatia and all over the world.