Croatia's extremists: when life gives you no future, make scapegoats 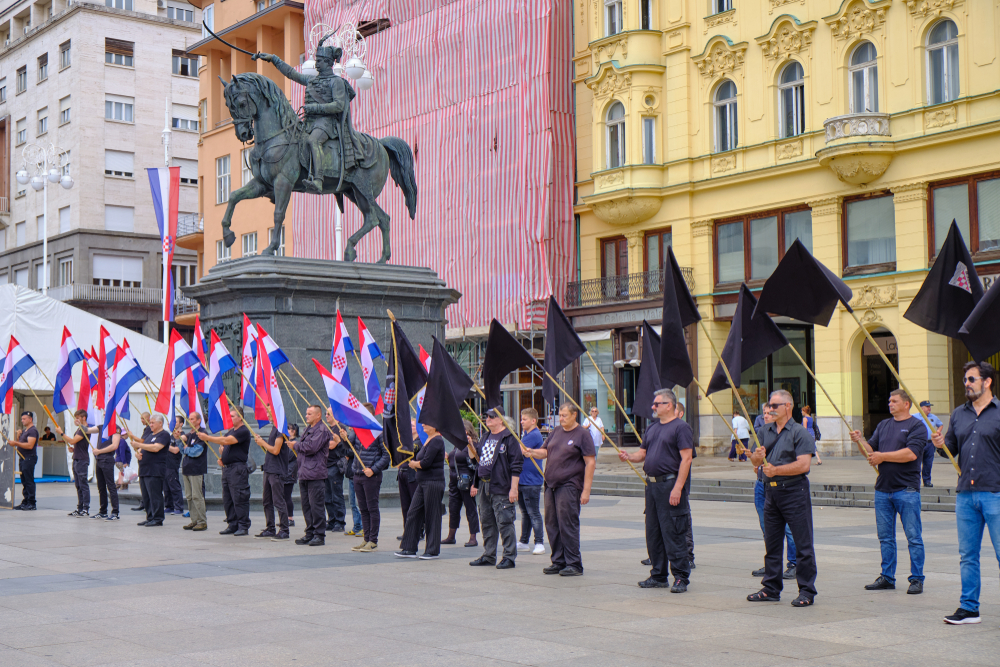 A part of Croatia's youth turns to right-wing extremism targeting ethnic and sexual minorities, migrants, and women. They do so in search of their role in a nationalist society where there is a shortage of opportunities, but an abundance of scapegoats

On June 11, a new right-wing extremism stunt once again shocked the Croatian public. A group of young men, members of the football ultras group Bad Blue Boys (BBB), gathered in the street in Zagreb, waving a banner “We’ll f*** Serbian women and children” and chanting “Kill, kill”. The banner included insignia of the WWII fascist Ustaša movement as well as flags of Croatian 1990s paramilitary unit Croatian Defence Forces (HOS), which used some Ustaša symbols. As usual among far-right groups, the targets are often Serbs, seen as the “Other” in the context of Croatia’s 1990s war. Croatian extremists often use the language of historical negationism regarding Ustaša genocidal policies towards Serbs.

Gathering adolescents and youth, Croatian football ultras groups are incubators for far-right and neo-Nazi extremism. Not all fans, but certain vocal groups often promote pro-Ustaša sentiments and anti-Serb rhetoric, such as “Kill the Serb”. The leadership of these fan groups usually ignores this far-right extremism pouring from the stands onto the streets, channelling frustrations. Other than football clubs, fans of the Croatian national team are notorious for their extremist behaviour. The case of Croatian footballer Joe Šimunić leading the stands into chanting the fascist salute “Za dom spremni” (“For Home(land) Ready”) after the game against Iceland in 2013 is the most notorious one, contributing to the normalisation of extremism in everyday life. On top of that, Croatian youth do not fear legal repercussions, due to a poor track record in prosecuting the proliferation of fascist insignia and hate speech.

Young people in Croatia get sucked into the world of far-right extremism through sports from an early age. In June 2019, a local Croatian football team chanted “Za dom spremni” when preparing for a match with their Serbian peers on a tournament for boys between 10 and 13. Although Croatian and Serbian kids got along fine after the game, the idea of using fascist chants for galvanising players is highly disturbing.

Far-right and neo-Nazi symbols creep into youth through various merchandise available online. Balkan Insight reported in September 2018 how online shop Patriot Hrvatska sells different items either openly promoting Ustaša or playing with their symbolism. For example, Patriot Hrvatska sold a T-shirt which incorporated the letter “U” – a known Ustaša mark – into a Smiley-face emoticon. Another example is a picture of a house in place of word “Home” in “For Home(land) Ready”. Popularity of merchandise with Ustaša and Nazi symbolism in the public space subconsciously triggers its normalisation. These types of provocations work with young people who do not take these issues seriously, thinking that these symbols are somewhat apolitical or funny. Similarly, in May 2018, electrotechnical high school graduates from Zagreb wore T-shirts with the slogan “Za dΩ [the symbol for ‘ohm’] spremni” during a graduation ceremony.

Patriot Hrvatska and similar shops also play with less obvious symbolism, selling merchandise with medieval knights or templars, often with the inscription “Antemurale Christianitatis” (“The Bulwark of Christendom”), symbolising Croatia. This symbolism comes in handy in mobilising youth for promoting anti-migration propaganda, targeting Muslims, which has gained traction in South-Eastern Europe due to Balkan migration routes. T-shirts reading “Defend Europe” play into the centuries-old trope of Croats being the defenders of Europe, which gives youth some higher purpose in the otherwise unprosperous country.

Besides the anti-migration messages, T-shirts with HOS coat of arms reading “Za dom spremni” are trendy among the Croatian youth. However, only some of these youngsters would be able to articulate either what HOS was or historical roots of the chant. Young men and women often wear these shirts at concerts of highly famous Croatian nationalist singer Marko Perković Thompson. Thompson, who plays with Ustaša symbolism – even has a song starting with “Za dom spremni” – attracts masses with his stage personality and patriotism combined with ethno-rock tunes. Although some of his fans are openly far-right or Ustaša sympathisers, part of his younger audience is not fully aware of the political context in his lyrics and symbolism. These fans are attracted by his music and sense of being a rebel to the political and social establishment – a deeply misguided instinct, as Thompson has been in grace of the political mainstream for years.

Croatia’s youth’s view of far-right extremism is not surprising when we look at the broader context in which they live. Croatian streets and even schools are covered with graffiti of Ustaša and Nazi symbols, as well as hate speech against Serbs. As authorities or citizens do not remove most of these graffiti, this creeping normalisation desensitises youth towards fascist symbols.

Schools are not helping either, as curricula do not offer a good insight into the history of fascism, Nazism, or Stalinism. History textbooks and some professors slightly downplay Ustaša crimes or obscure WWII history, presenting both Ustaša and Partisans within the anti-totalitarian paradigm. And it is not only history classes that are confusing teenagers, as Croatia still lacks both civic and sexual education in high schools, due to the strong opposition of conservative NGOs and the Catholic Church. All this contributes to the marginalisation of members of national, religious, and sexual minorities. Furthermore, teachers – named by local Bishops – of Catholic religious education taught in schools often promote highly nationalist and ultraconservative ideas against the “Other”.

Besides religious education in school, the Catholic Church reaches youth in their Sunday schools and the whole network of NGOs promoting highly conservative ideas. Thus, children and youth are involved in events like the “Walk for Life”, organised across Croatia for years. Despite its innocent name and columns of cheerful youngsters that promote the value of life in these events, the “Walk for Life” serves for promoting ultraconservative values pushed by NGO “In the Name of the Family”, linked with the Church - the one that triggered the 2013 referendum against same-sex marriage and seeks to ban or limit abortion.

All this results in creeping normalisation, making youth more susceptible to extremist ideas: anti-LGBT and anti-migrant rhetoric, initiatives to limit women’s rights, or even openly fascist ideas. The newest generation of ultraconservatives is being born in this context, less tolerant of the “Other” than their parents’ generation. Croatian youth are searching for their role in a society plagued by extreme nationalism and conservativism, only occasionally countered by the mainstream. Tying both conformism and youth sense of rebellion, young people in Croatia turn towards political extremism, bringing together the legacies of fascism, 1990s extreme nationalism, and Catholic conservativism. They see their role in protecting “true values”, thinking that they are protecting the nation from internal and external enemies, multiculturalism, and globalism, while they are helping the establishment in crushing its opponents. Youth turn to made-up history as the present is unsatisfying, while the future looks bleak. And it is precisely in that context that young people turn to scapegoats – a psychological defence mechanism for rationalising their frustrating reality and finding the culprits for unrealised dreams of a better tomorrow.