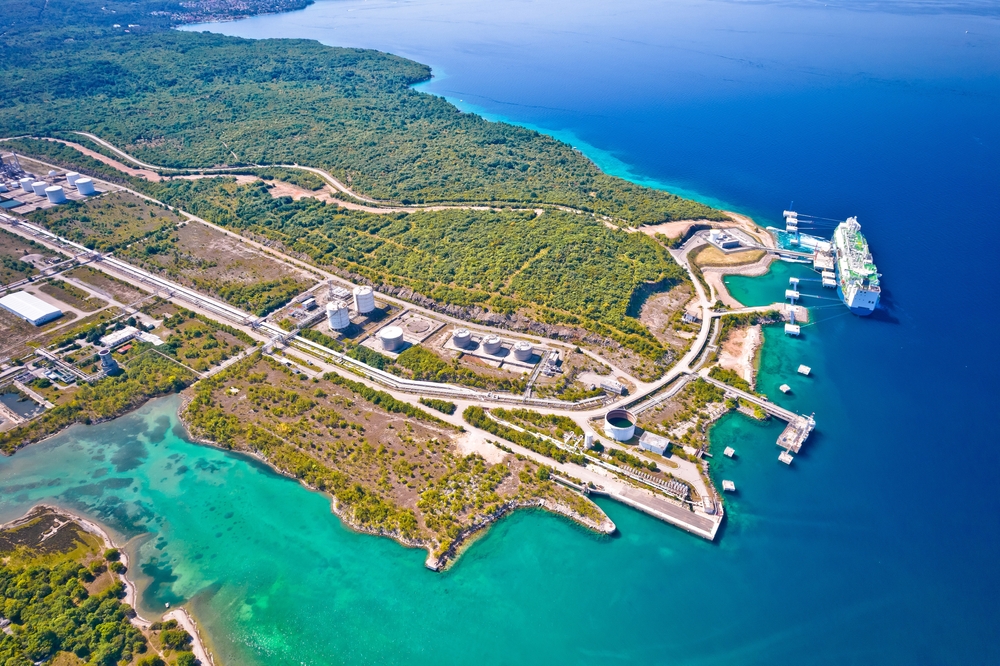 Regasification plant on the island of Krk © xbrchx/Shutterstock

Croatia is preparing to become a regional gas supply centre thanks to the regasification plant inaugurated on the island of Krk in 2021. The Plenkovic government rejoices over Zagreb's renewed strategic-energy role, but environmentalists disagree entirely

"Croatia will become a regional gas supply centre". As Europe prepares for a difficult winter from an energy point of view, for Croatian Prime Minister Andrej Plenkovic the future for the country is, if not rosy, at least promising , thanks to – he says – some decisions made in recent years and the latest moves by his government.

Croatia's energy policy revolves around the regasification plant inaugurated on the island of Krk in the Upper Adriatic at the beginning of 2021. Co-financed by the European Union  with 124 million Euros, the plant has a current capacity of 2.6 billion cubic metres per year, against the approximately 2.9 billion that make up Croatia's annual gas demand. This is a key infrastructure which was built amid controversy, but which several observers now judge to be apt: when Russia's cheap gas fails, Croatia can refuel elsewhere (other European countries are in a similar situation, others have instead planned to build new regasifiers ).

The regasification terminal on the island of Krk was co-financed by the EU programme “Connecting Europe Facility (CEF) , an EU tool to promote growth, employment, and competitiveness through targeted infrastructure investments. This funding instrument supports the development of trans-European networks in the fields of transport, energy, and digital services. Established by Regulation 1316/2013, it has a budget that for the period 2014-2020 was 30 billion and 400 million Euros, including 11.3 billion from the cohesion funds for transport infrastructures.

The Krk regasification plant is not only boasted by the Croatian government as an internal supply tool, but above all as a useful infrastructure for neighbouring countries. At the end of August, Andrej Plenkovic announced that the capacity of the LNG terminal will be increased from 2.9 to 6.1 billion cubic metres and that a new gas pipeline will be built between Zlobin, on the mainland not far from the Krk bridge, in Bosiljevo, on the way to Karlovac and Zagreb (and therefore Hungary). The total investment is about 180 million Euros, which hopefully will be partially financed, once again, by the European Union, given the common interest in the infrastructure. In fact, already today, countries such as Hungary  and Slovakia  procure their supplies from the Krk regasification terminal, where a direct refuelling service from cargo ship to tanker  has been active since April.

In short, Croatia's strategic-energy role could increase in the future. At least, Zagreb hopes that the doubling of the terminal's capacity will be completed in 2024-2025 (the construction, announced in October, of a gas depot  near the port of Zadar is also part of the project). And the Croatian government is not the only one to see the regasification plant as an appropriate choice of the past. German daily Frankfurter Allgemeine Zeitung  speaks for example of a “wise and far-sighted project, at least in retrospect”, that is, in the light of the war in Ukraine. The article also denounces the "bias" that had "characterised much of the (media) coverage of the regasification plant" at the time of its construction. In short, Zagreb has looked ahead for a long time and now it deserves praise. But is it really so?

At the headquarters of environmental NGO Zelena Akcija, in downtown Zagreb, Marija Mileta rolls her eyes as soon as she hears about the good reasons why the regasification plant on the island of Krk needs to be expanded. "There was a large lobby from the European Union and the United States for the construction of the terminal – recalls Marija, head of the campaign for the progressive elimination of gas – the government then decided to impose a special law to speed up the works, 80% of the comments during the public discussion were rejected and some procedures were skipped "(some of the criticisms of the project were in fact due to the approach adopted by the government in the construction of the plant, listening to local communities little or not at all). But in light of the current energy crisis, it was still a far-sighted choice, wasn't it? "It's smoke in the eyes", Mileta cuts short, "the hydrocarbon industry takes advantage of the situation and gas, instead of arriving from Russia, will come from the United States”.

The criticisms that Croatian environmentalists move to the expansion plan of the regasification plant are many, from the way in which the project is presented – "the expansion of the terminal does not solve this winter's problem, it will take a new environmental impact study and then at least a year and a half of work", says Marija Mileta – to the risk of corruption, especially in light of the scandal that recently hit Croatian hydrocarbon company INA (from which some people close to the government stole 120 million Euros of gas). But the most important objection is of a strategic nature. "It would have been better to invest that money in solar energy", continues the activist, who recalls "solar represents 1% of the Croatian energy mix. The municipality of Maribor in Slovenia alone produces more solar energy than all of Croatia”. And there is not only photovoltaics: "We do not talk about energy efficiency, we do not intervene in the insulation of buildings, in short, we lack a long-term vision".

The hydrocarbon industry in Croatia has a long history of murky ties with governments (an excellent summary is Gong's documentary “Gospodari plina”  or "Gas Lords"). The best known case is that of Prime Minister Sanader (2003-2009), sentenced to 6 years in prison for accepting a bribe from Hungarian oil group MOL, that in exchange was able to complete its takeover of INA, becoming the majority shareholder (MOL holds about 47% of the capital, against 44% of the Croatian state). But there are many other events and scandals still ongoing – just a few weeks ago, the CEO of INA resigned  over allegations of corruption. Against this backdrop, it is not surprising that every new project in the hydrocarbon sector causes great perplexity in Croatia.

There is also the question of the energy transition. Rising prices for Russian fossil fuels, and gas in particular, could have accelerated the shift to renewable energy sources, an imperative for every government in the fight against climate change. But it looks like things will take a different turn.

A document from the Euractiv portal  suggests that the governments of the 27 EU member states are determined to reduce the percentage of renewable energy imposed by the European Commission under the REPowerEU plan: instead of aiming for 45% of renewables by 2030, national governments would prefer to settle for 40%, so much for global warming.

The real urgency is not the climatic apocalypse, but heating for next winter. In this context Croatia, which bets all on the regasification plant in the Adriatic, is no exception in Europe – indeed, it is a model pupil.