Croatia: HDZ ringed by corruption ahead of the elections 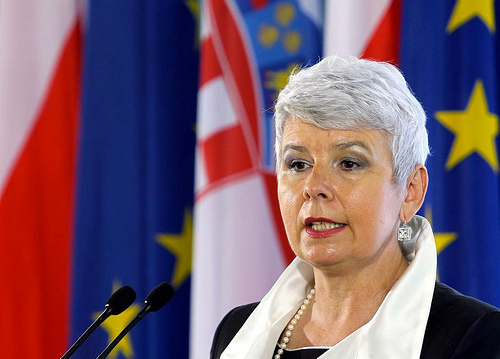 While former Croatian Prime Minister Ivo Sanader faces trial on corruption charges, further evidence emerges on the wrongdoings of the ruling party HDZ, whose popularity is at an all-time low. Political analysts believe the center-left has already won the elections, scheduled for next December 4th

Only a month away from the general elections, scheduled for next December 4th, events from Croatian politics look more and more like scenes from a thriller. The corruption trial against former Prime Minister and President of the ruling party, Ivo Sanader, has started and his party, the Croatian Democratic Union (HDZ), now under the lead of Jadranka Kosor, is under investigation for slush funds. As if that were not enough, the HDZ property was confiscated, the party’s coffers are empty and its leader, Jadranka Kosor, has invited her closest collaborators to pledge their private property so to be able to ask for bank loans that will then serve to fund the political campaign.

The HDZ has ruled for sixteen out of the twenty years of the Country’s independence and has never been in such a difficult situation. Not even in 1999, when its founder and first Croatian president Franjo Tuđman died, or when at the beginning of 2000 it lost the elections for the first time.

Sanader fled to Austria, last year, and was sent to jail in Salzburg first and then in Zagreb. The trial against him started last week and it is already putting on the table the complete lack of scruples of the HDZ leaders in using state money for private purposes. In this first trial, Sanader is accused of taking bribes from the Austrian Hypo Bank, while he remains waiting for the other trials: the most interesting will certainly be the one about the Croatian oil company INA. Sanader is, indeed, accused of taking a 10 million Euro-bribe to enable the Hungarian oil company MOL to take control of INA, despite having only 45% of the stocks of the biggest Croatian company.

The comparison between the Croatian political events with the scenes from an action movie is not so exaggerated, if we also consider the reporters releasing the existence of a video recorded at Marcellino, a restaurant in Zaghreb, starring former Prime Minister Sanader and the Managing Director of the Hungarian MOL, Zsolta Hernadi. The reporters of the Zaghreb daily, Jutarnji list, who were able to watch the video, have described what it contains. October 2009: unsuspecting the restaurant has video surveillance, Sanader and Hernadi sit together at a table in a secluded space.

They sit, and then Sanader takes the battery off his cell phone, fearing he might be tapped. He then takes a notepad out of the pocket of his jacket and gives it to Hernadi. They do not utter a single word. Hernadi reads what is on the notepad, takes out his cell phone and dials something, as if using the calculator. After a few minutes, he writes something with a pen on the notepad that Sanader had given to him earlier and hands it back to the former Prime Minister. Sanader looks at it, smiles widely with satisfaction and finally the two interlocutors toast with a glass of expensive wine.

The reporters believe that is the exact moment when Sanader and Hernadi agreed on the 10 million Euro bribe to pay out to the former Prime Minister. In exchange, the possibility for MOL to take control of and manage INA, even though the Hungarian company did not have the majority stake in the Croatian oil company.

The Court will most likely use this video as evidence, as the restaurant did show camera surveillance warning signs. It is not yet clear how Sanader and Hernadi overlooked this, but the video – as key evidence – could cost them a long detention in jail.

The recently uncovered incident of how state money was stolen has horrified the Croatian public opinion, already bewildered by a corruption spate within the HDZ. Along with the trial for the Hypo Bank and MOL bribes, Sanader has to also stand trial for withdrawing incredibly high amounts of money from public companies. In Croatia, this is known as the “Fini Media case”: through this private company owned by a close friend of Mladen Barišić’s, head of the Croatian Customs and Treasurer of the HDZ party, money was being swallowed aplenty. The procedure was very simple: while he was Prime Minister, Sanader held a meeting with the directors of the major public companies, such as the Croatian Electric Company, the Croatian Motorways, Croatia Insurance and others, ordering their advertizing campaigns go through Fini Media exclusively.

The fake invoices issued by Fini Media were regularly paid by the state companies, while Fini Media would hand the cleaned cash to the head of the Croatian Customs, at the same time in charge of the HDZ coffers. It is true that the party used part of that money to fund the campaigns, but most of the cash, as reported by investigators, was transferred to the former Prime Minister Sanader. Millions of Euros.

The opposition is getting ready for victory at the elections

The repeated scandal episodes within the ruling party, where not only Sanader but also other HDZ officials are involved, have led the party’s popularity to drop to an all-time low. A month away from the elections, polls on the elections results anticipate the HDZ’s fiasco. Indeed, the polls have led most analysts to state that the elections are only going to be a mere formality, as they have already been decided.

Practically everyone is certain that the left-wing opposition, come into action as “Kukuriku Coalition” and comprising the Social-democratic Party, the Croatian People’s Party, the Istrian democratic Assembly and the Party of Pensioners, is going to win the next general elections. They all just wonder to what extent. Will the HDZ defeat be serious and its number of deputies in the next Parliament only symbolic, as analysts state? The possibility that the HDZ will totally disappear from the Country’s political constellation cannot be ruled out. In this case, the Croatian political scene in the wake of the elections would be completely different compared to the one we have seen in the past twenty years.