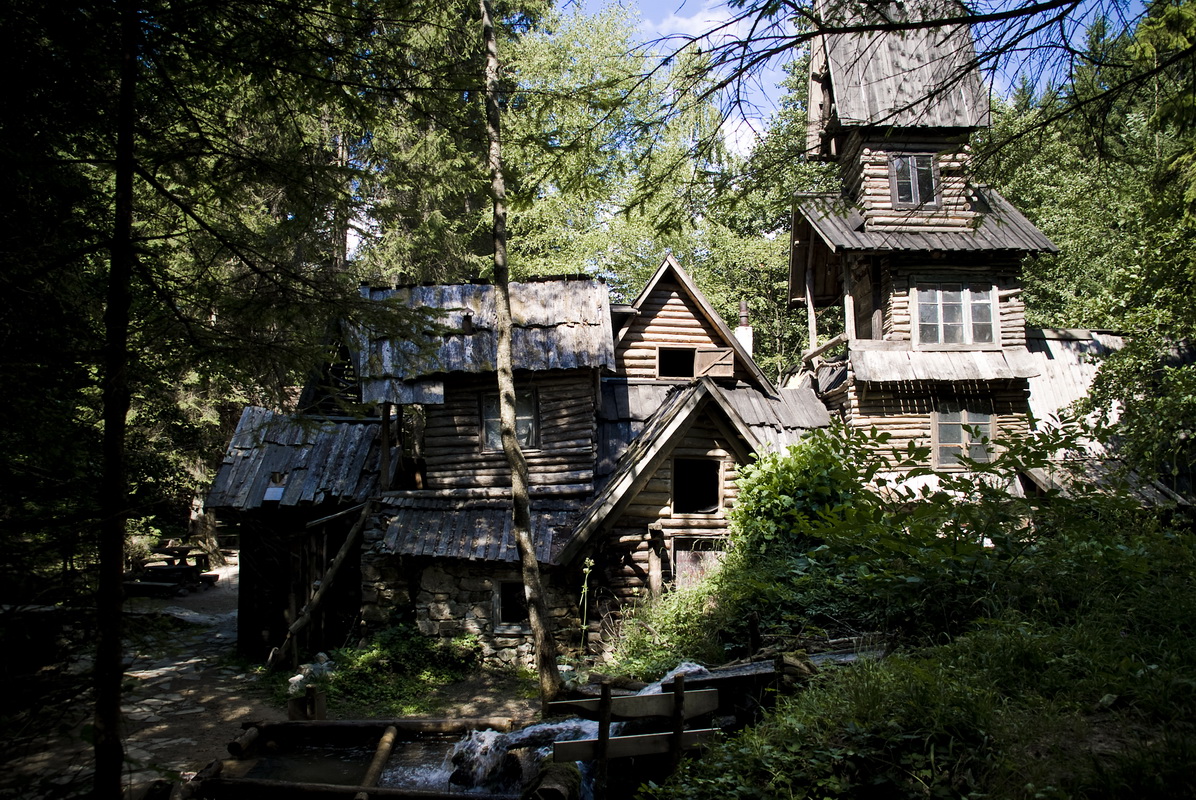 Zelenkovac is an eco-tourist village in the Bosnian mountains, not far from Banja Luka, hosting artists and travellers from all over the world. According to his founder, Boro Janković, its beauty has a mission

"Beauty will save the world," says Prince Miskin, the main character of Fyodor Dostoevskji’s novel “The Idiot”. Unfortunately, as history has shown, sometimes this is not the case. War and hatred make people blind and universal monuments of beauty are destroyed for no reason other than the triumph of the darkness inherent in every human being. In some ways, however, beauty does save the world. According to Borislav – “Boro” – Janković, a painter by profession, beauty has saved the village which is not only his home, but his “creature”, Zelenkovac, the location of a precious as much as rare event during the war in Former Yugoslavia, Europe’s cruelest conflict after the end of World War Two.

But where is Zelenkovac and what is it? Situated only twenty minutes by car from Mrkonijć Grad and only one and a half hours from Banja Luka, the capital city of Republika Srpska, one of the two political entities of Bosnia and Herzegovina, Zelenkovac is today an eco-tourist village in the mountains. Wood cabins and bungalows have been turned into accommodation facilities for travellers who want to spend a few days closer to nature. If this is a good “tourist” description, Boro stresses that the essence of Zelenkovac is that it’s “a place that inspires peace."

The photos of this reportage are by the photographer Luca Marinari. Go to his website: www.lucamarinari.com 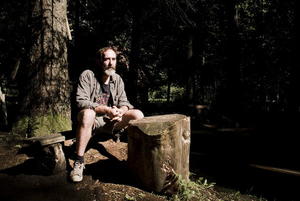 He is one of those people who master the art of narration in such a way that the listener is immediately grabbed by his speech, and curiosity is gradually stimulated in the audience. Indeed, as he is sat at a table one sunny morning, it is a pleasure to listen to his tale while he sips on a coffee and takes an occasional drag of a cigarette. He explains that Zelenkovac has not always been what it is today. In fact, it has changed a lot. Its story, inextricably intertwined with Boro’s life, started in the early 1980s.

"This place belonged to my family. It used to be the location of a windmill. This being a quiet place, after completing my studies at the Art Academies of Sarajevo and Banja Luka, I decided to move here to paint. As I was almost penniless, I started to work with the objects that I found inside the windmill. I turned them into tools for my paintings. People thought I had become some kind of lunatic. After all, why did I come to this place, an old windmill, all alone? So, you know how these things go, they started to call me “Crazy Boro”.

In fact, Boro was laying the foundations that turned Zelenkovac into an oasis of peace and the meeting-place for artists coming from all of the Former Yugoslav republics, who were fascinated by his project. "They were all friends of mine. They weren’t only painters, but also writers and poets. Through the years every one of them helped me build these wooden structures which today allow us to host around fifty people." Having met Boro, there can be no doubt that so many have tirelessly helped him in his enterprise.

Around six feet tall, with big shoulders and a thick beard, from a distance Boro looks like one of those solitary mountaineers who seldom stop for a chat, but as soon as he approaches you to shake your hand you will be struck by his warmth.

His straightforward attitude makes his interlocutors feel comfortable right from the start: "Don’t worry, if something goes wrong I’ll see to it." This is what he seems to be saying every time he slips his heavy arm behind your shoulders.

His big hands suggest physical strength rather than the delicate touch required by a painter. Indeed, in order to turn Zelenkovac into the pearl which it has become, a lot of strength and sweat have definitely been necessary.

Another trait which really strikes the listener is Boro’s honesty when he describes the darkest days in his life: "There were times in the past when my sense of solitude was such that I imagined that my house, the old windmill, was like a sinking boat at sea in the middle of a storm. These for me were the gloomiest moments." 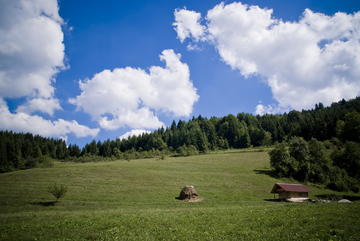 Another sad period coincided with the beginning of the war that raged across Yugoslavia between 1991 and 1995. In those years, Boro was not even living in his homeland: "I had fallen in love with a Russian woman and moved to live with her in her country. But as soon as I knew about the conflict, I did not wait one single second to come back and protect the places where I had grown up."

However, unlike others, he did not return to pick up a rifle: "I am against war. War is shit, there’s no other word for it. It’s not a matter of being afraid, I was not afraid, so it’s not about this. But I just don’t see the point in standing there for hours, days, weeks while you wait for someone to order you to do this or that... Where’s the meaning in all that? It’s just not something for me."

And so, instead of wearing a uniform, Boro decided to use his experience as a cameraman and writer and started to work for a broadcaster in Banja Luka. Finally, after years of forced exile from Zelenkovac, the end of the war presented him with the chance of going back to the place that years of hard work had turned into an enchanted village – “reminiscent of Tolkien’s novels” according to Lonely Planet – in the wooded mountains of Bosnia.

We can only try to imagine the feelings of hope, dejection and trepidation which must have stirred within Boro’s heart on the day of his return. Considering that around 80% of the buildings in the cities and villages of the whole country had been obliterated by war, his concern for what could have happened to his beloved Zelenkovac is more than understandable.

But, when he arrived, the feeling became one of surprise and unexpected joy: "I really found it hard to believe, but there were no signs of destruction. Yes, okay, some weapons had been left here and there, but almost everything was in pristine condition. What makes the whole thing even more incredible is that all three armies involved in the conflict had stopped here: Bosnians, Croats and Serbs. If there has been no violence, if this place hasn’t been destroyed, it is due to the sense of peace and harmony with nature that has the power to stop people from becoming aggressive."

Zelenkovac’s history is really a rare gem in a conflict in which the atrocities of ethnic cleansing, mass killing, rape and looting were experienced by the population. What makes Zelenkovac’s history all the more special is the fact that no landmines were found here, while in the rest of Bosnia and Herzegovina they still pose a serious threat, even twenty years after the conflict. Travel guide books and local inhabitants still advise against trekking off the beaten track or venturing onto gravel roads.

Despite the initial relief, it was not long before new dangers loomed on the horizon for Boro. "My property had been spared by the violence of the war, but Zelenkovac was under threat from the capitalists who had made a fortune thanks to the war and wanted to buy the surrounding land." 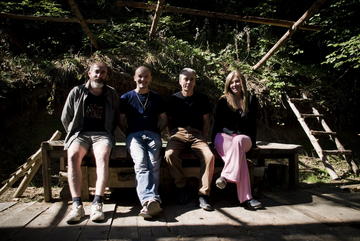 Boro Jankovic and his crew, photo by Luca Marinari

Fortunately, Boro took pre-emptive actions by transforming Zelenkovac from an artists’ commune into a sustainable eco-tourist village: "After the war, people lived in total chaos. Things belonged to whoever took them. For this reason, I immediately presented a project to local and international authorities, which was to turn Zelenkovac into what it has now become: a village in harmony with the surrounding environment."

But Boro remains an artist and a space devoted to music had to be included. The John Lennon stage was thus created in order to host performances by jazz musicians from several countries around the world every July. "Vasil Hadjmanov, one of former Yugoslavia’s greatest artists, or Hannes Beckmann, a German jazz musician, not to mention the saxophonist Monty Waters, who played alongside Miles Davis: they have all performed in Zelenkovac."

Word of mouth spread so quickly that Zelenkovac has started to attract visitors from all over the world: "It’s not only tourists who come here. Some people come as volunteers to help us out with our project. We also had a visitor from Mongolia who had read about us in the Lonely Planet guide," claims Lily, a collaborator of Boro’s, who says she has to accept several reservations for New Year’s Day well in advance.

"Thanks to this place we’ve had the chance to make contacts which would normally be unthinkable”, says Sasha, a young student from a nearby village who sometimes pops in Zelenkovac to promote the rakija – an extremely alcoholic beverage - produced by his family. This is all consistent with Boro's view: "If we want to create long-lasting peace, we must create bridges between people. Many visitors come to this place to spend some time in harmony with nature. For the locals, this is a wonderful opportunity to meet people from different cultural backgrounds and create a network of friendship which will last in time. This is Zelenkovac's ultimate mission.”