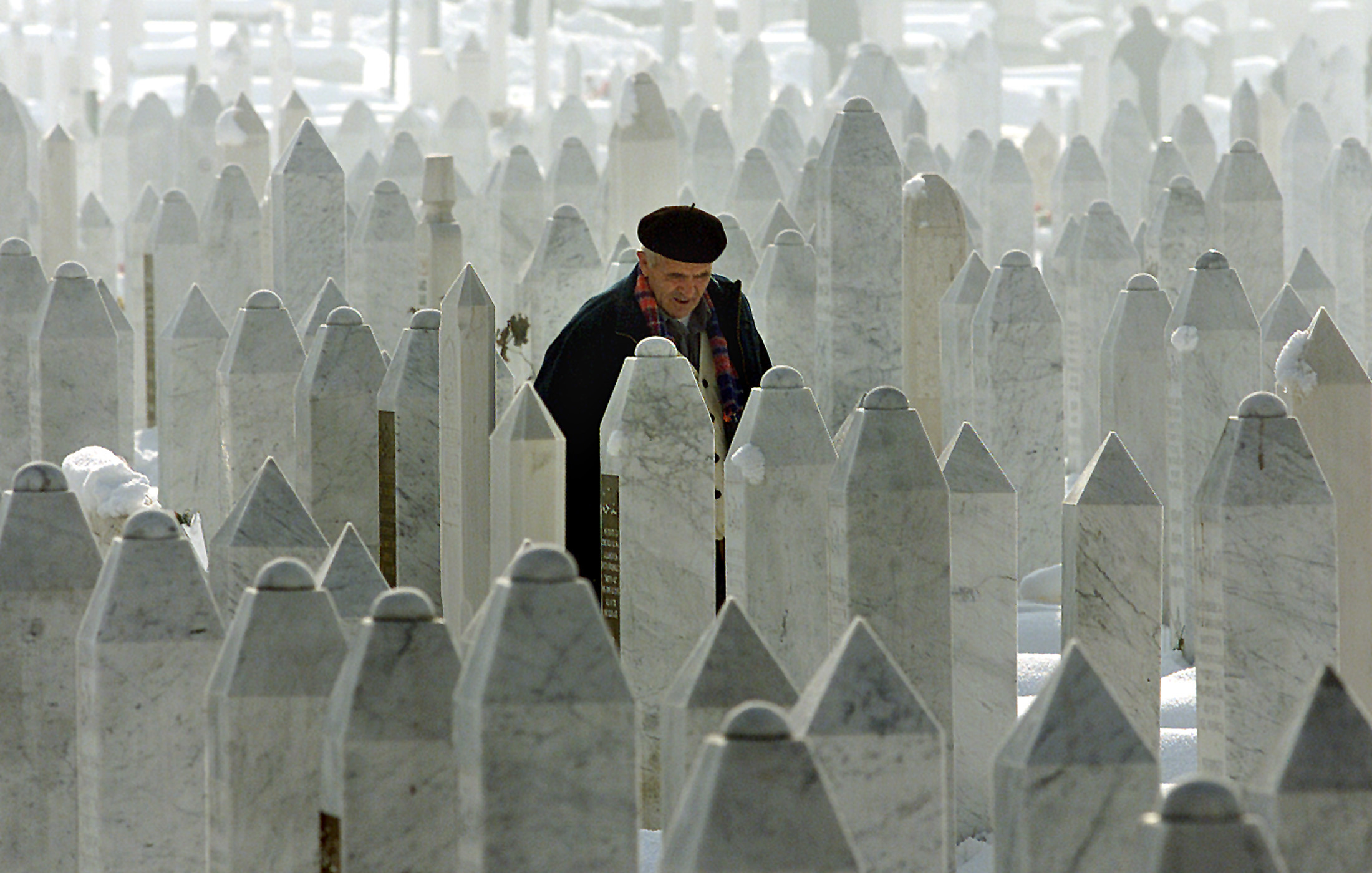 In the first anniversary of the massacre, celebrated with Karadžić and Mladić finally at The Hague, a commentary about the uncomfortable questions about the behavior of the defenders of the enclave and the responsibilities for its fall. The pages of Emir Suljagić, the role of Naser Orić and Alija Iztbegović, the judgment of Abdulah Sidran

From the 11th to the 18th of July 1995, in the protected enclave of Srebrenica, from 8 to 10.000 unarmed Bosnian Muslim men from 16 to 60 years of age were massacred by the Bosnian Serb Army under the command of General Ratko (warrior) Mladić. This year, the anniversary takes on a particularly dramatic value.

Mladić, the military responsible for this and other slaughters, was arrested, after Radovan Karadžić, and is now on trial at the International Criminal Tribunal of The Hague. In just a few days, the soldier played the role of the old battered veteran and the arrogant warrior, the father haunted by the memory of his daughter’s suicide and the miles gloriosus that rudely scoffs at the Judges of the Tribunal for war crimes in the former Yugoslavia. Just like a comedian, apparently he likes playing different roles.

He stroked the frightened children in the enclave of a ravaged Srebrenica while preparing their fathers’ massacre; he reassured Avdo Palić, in charge of the Žepa enclave, while lifting weights to tone his muscles to then kill him with his own hands. Mladić is the ‘monster with epaulets’ of Abdulah Sidran’s poems from the siege. Mladić, inciting the artillerymen to increase the rhythm while shooting the civilians of Sarajevo till ‘their reason is twisted and wiped out’, till they lose their wits. Together with Karadžić, he is the master character of the ‘Bosnian share’ of the mono-ethnic expansion project said of the Great Serbia.

The knives and canes of the nationalist Serbs under Mladić’s command slit the throats of 10.000 men in the valley of Srebrenica. The French General Bernard Janvier, commander of the UN Protection Force (Unprofor) in Bosnia and Herzegovina, stops the air attacks against the Serbs that are besieging and entering the protected enclave. The UN Dutch Forces, deployed in defense of the enclave, do not fire a single bullet, but lift the white flag and their commanders - Karremans and Franken – collaborate with the Serbs. These are the manual doers and the people responsible on the field for the Muslim Holocaust.

Emir Suljagić, Postcards from the grave 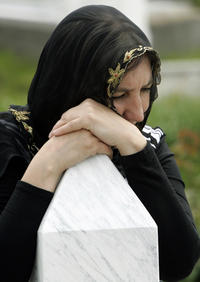 Among the many accounts on Srebrenica, one of the most poignant is Postcards from the Grave, by Emir Suljagić (the title recalls the short poem The Grave written during the Yugoslav Resistance). A UN interpreter survivor of the slaughter, Suljagić is hooking, his prose straightforward, anti-rhetorical: ‘When the fog had not yet set on the narrow and deep valley of Srebrenica, hundreds of men were climbing up the steep slope above the town and all of them – dressed in filthy rags, smelling of stale sweat – carried an ax and a rope. The destination was a forest to climb to for firewood, with the help of their hands and feet…. They would cut the first tree they encountered, tie it with the rope and drag it for hundreds of meters…’.

There is no water, no food, no fuel in Srebrenica, Goražde or Sarajevo, the communities long under siege. Need and poverty lead to gangs, survival in the besieged buildings is in the hands of speculators and black marketeers; the ghetto is managed by hierarchies of profiteers: “In the summer of 1994 a protest broke out in front of the town hall. People accused the mayor and local officials for the theft of humanitarian assistance, because of which they suffered. The organizer of the protest was killed the very same night. The town shut up. The practice continued. Some of the assistance was distributed to the population while the rest, higher quality goods, would end up on the market or in private storage rooms of civilian or military officials who would pick in the central storage house the quantity and the goods they were interested in. There were all sorts of things, for the officials, the town hall employees, their wives and their lovers: from new sneakers to Levi’s jeans…”

The legendary commander of the defense of the enclave is Naser Orić. Suljagić writes lines of admiration for this charismatic commander, but also states: “A few years after the war, in 1998, I was granted brief permission to keep and read a report of the counter-information service of the 2nd korpus of the Bosnia and Herzegovina Army, which detailed how the same Orić was the organizer of the black market. The report comprised a few pages with the names of the dealers, the ways and places of trade with the Serbs, the most searched for articles…”

Naser Orić – it is historically known - abandoned the enclave with his officials during the final moments of the Serb attack, leaving the defense guideless. In a somewhat confused narrative course [this happens to him during the topical moments], Suljagić writes: ‘Have you heard?’ ‘What?’ ‘Naser has fled the city!’, he told me with a bitter smile. I could feel fear gushing from me, I was so appalled I almost fell: ‘When?’ ‘This morning: him, Ramiz and another ten of them’ ‘How?’ ‘On a helicopter’ ‘So, is this the end?’ I asked myself more than him’.

The narration of the fall of the enclave and the genocide should restart from here. Suljagić abandons the idea and, even though it has such peremptory pages, his book starts stuttering. Anyways, while Žepa and Srebrenica fall, Naser Orić leaves command by order of the Sarajevo Government [‘seven times I refused to get on this helicopter!’, he will state biblically while getting on it] and the massacres start, in the capital everyone is clear on that Alija – the president – has accepted the ethnical division of Bosnia and Herzegovina: ‘The Serbs can have the enclaves along the Drina and they move out of the occupied quarters in Sarajevo!’, the citizens of the capital besieged in July 1995 kept repeating me.

For many years, the Bosnian General Halilović has accused the government of not wanting to defend the enclaves with the Corps in service in Tuzla, who had remained inert. And anyway, Izetbegović had never thought of Bosnia other than a small mono-ethnic Bosnia. His limited and narrow political vision could not turn the table of the international governments that were preparing Dayton – if anything, it was the pious Alija who thought about making the tables turn [him, pious, praying with the djellaba in the mosque and in Parliament. Less pious, his son Bakir, an architect, manager of a huge slice (2.000 billions of the old Italian Liras) of the international aids for the rebuilding of Sarajevo].

Had the pious Alija considered the genocide of the Bosnian of the Podrinje region in the enclaves-Sarajevo quarters bartering? The fundamental question remains. This might eventually be the sin with no room for forgiveness. 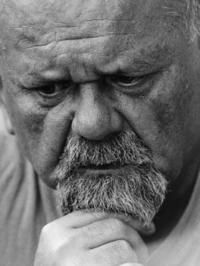 Abdulah Sidran has written the long, desperate poem Tears of the Mothers of Srebrenica on the irredeemable mourning for the Bosnian genocide. ‘In the summer of 1995, did President Izetbegović accept the division by “ethnically cleansed” zones and the enclaves-Sarajevo quarters bartering? Did no one defend the Srebrenica enclave, not the UN, not the Bosnian Army, not the military commander of the enclave Naser Orić, withdrawn, with his officials, from the Sarajevo Government before the 11th of July?’. To these, Sidran states: ‘Historians shall answer these questions. None of those who, one way or another, made plans with the idea of ethnic displacements and in general an “ethnic territorialization” will be rated positively by history. There are hints as to the Bosnian share also being involved in coincidences of some kind. It is for this reason that many patriots that fought with honor, now feel disgusted. One of them has said: it is if I played a game, righteously and with all my might, only to discover at the end that the game had been sold’.

The Country that for 50 years, from the Resistance to the 90s, had found the balance of a common life shared by peoples of different traditions and cultures and analogous religions, is divided in blood. The parties’ barbaric, primitive ethno-political vision – first and foremost and with no alibi the Serbian nationalism – is responsible for the bloodshed that seals the parable of the Srebrenica enclave in the common graves. A mono-ethnic vision and the collective death of the other.