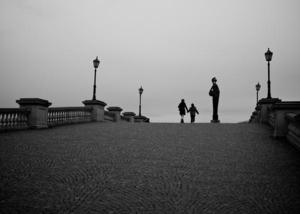 The Italian association „Luciano Lama“ gave hospitality to Bosnian war orphans for summer vacations in Sicily during the Nineties. Ties started 20 years ago are still strong

In 1991 Aleksandra Gavrić didn't know any Italian person. She also didn't know what the word politics meant; she had never before heard the word weapon. It is questionable whether she was capable to pronounce even one single word, because she was only one year old back then. However, just after her birth, the big geopolitical games started to complicate her life. A bloody war had begun in Bosnia Herzegovina, Aleksandra's country. One of the victims was her father, who lost his life in 1992 during combat operations on Mountain Vlasić, in Central Bosnia.

Hundreds of thousands of people were forced to escape from their homes. For four years, brutal scenes from Bosnia filled the front pages of all the world's media. Media themselves reported the conflict as a completely chaotic and endless situation. The public in the rest of Europe and the world was confronted with fragmented information, which made it hard to understand the complexity of the situation on the ground.

It was in this context that the NGO "Luciano Lama", based in Enna (Sicily), started its activities.

The organization, dealing with supplies and humanitarian aid at the beginning, tried to overcome stereotypes on the conflict, by establishing direct relations with the people affected by the war. The NGO began to organize periods of holiday in Sicily for Bosnian kids, seeking support from Sicilian families. The initiative sought to offer relief and leisure to children, but it also gave an opportunity for foster families to get involved in transnational solidarity.

Three years after the end of the war, Alexandra heard about this action at her school. She applied, and in the summer of 1998, she went to Sicily for the first time. There she met the Roccella family - Anna Giuseppe, and their three children - who had known about this initiative through an acquaintance and had decided to take part. Since then, the Roccella family continued to offer hospitality to Aleksandra till nowadays, as many other families have done with other Bosnian children and teen-agers.

"I practically grew up with them – says Aleksandra. I know all of their friends, relatives, and neighbors. I've been to many of their celebrations, birthday parties, I received countless gifts over the years." Aleksandra today lives in Banja Luka, where she finished medical high school and where she is currently doing her practice as a physical therapist at a local hospital.

From emergency intervention to long-lasting relations

After the war was over, the visits of children from Bosnia and Herzegovina to Sicily have become traditional. Every year, about 300 children who were orphans or in need, have stayed for a period of 30 days or more to Sicily, for free. Foster families were mainly the financiers of this action, but the organization said that municipalities in Sicily had their share too. 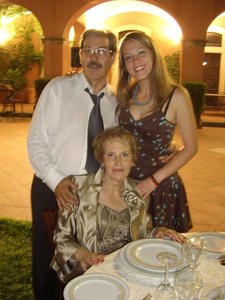 Aleksandra with the Roccella family

In Sicily, Aleksandra has been hosted in Ragabulto, where the Roccella family lives.

«It has been a positive experience since the very beginning. The initial difficulties in communicating with Aleksandra where soon overcome, as she was surprisingly keen and proactive in learning Italian language», says Anna, Aleksandra's 'Italian foster mother'. «We soon became very close to Aleksandra, she was a very sweet child, and she made us aware of the situation in her country, which we could have barely guessed otherwise.» Explaining how this experience enriched the Roccella family, Anna continues: «Our relation with Aleksandra gave us the opportunity to visit her country twice, getting to know the situation there, with all the difficulties on the political, social and economic levels».

The arrival of children from BiH have exerted an impact on local communities in Sicily, too. «The hosting activity was not a private matter of our family, as every time that children arrived, public events were organized for the entire city, with ceremonies for welcoming them». But it was not always the case that this initiative would be welcomed and praised, only. «We had some discussion with friends about the opportunity to engage in something so complicated. They would often ask us why were we assuming the responsibility to host a child coming from another country, when there is so much people to help in Italy. Our answer was always based on the peculiarity of the situation, in which initiative needed to be taken. It needed to be done. Of course it is a responsibility, but if nobody assumes it, nothing is going to be done.»

Since the end of the war, thousands of children have been hosted in Sicily. Some have stayed there, some of them were provided with education and a job by their hosts.

Aleksandra says that some of the children that she knows call their foster families mom and dad. "I cannot call them mom and dad, because nobody can replace my parents. But I like to go at their place and hang out with them, and I'm glad when they come to BiH. I will continue visiting my foster family also in the future", she stresses.

In addition to this project, the Sicilian NGO is active in Bosnia with a number of other projects. In Srebrenica it organized a Centre for the reception of young job seekers, with a laboratory for processing of ceramics; in Zenica it opened a Centre for victims of violence; in Ilijaš, near Sarajevo, a Center for receiving widows has been financed by the association based in Enna.

The last in a series of projects is to be inaugurated soon in Mostar, where the Italians are building a Youth House giving hospitality to young people, who used to stay in orphanages but must leave this kind of structure when they reach the age of 18. The house shall host them, to assist and help them with the «transition» towards an autonomous adulthood.

Most young people in Bosnia and Herzegovina live with their parents even after they turn thirty, mainly due to the poor financial situation and the lack of job opportunities. The high unemployment rate, which affects the entire country, hits even more severely young people. According to UNDP, about half of the population between 15 and 24 years does not have a job. Therefore, more and more young people are opting to leave Bosnia Herzegovina.

Reportedly, about 150'000 young people left the country since the end of the war. A survey conducted by the Institute for Youth Development KULT in the Federation, one of the country's two entities, shows that a consistent number of them is taking very seriously the option to move abroad: 37% of the respondents said they would leave immediately if they had the chance, while 9% has already undertaken steps to do so.

These numbers represent an immense loss for a small country such as BiH. Faced with such a serious situation, Bosnian policy-makers have so far failed in formulating any strategies that would incentive young people to remain.

It is unfortunately no surprise that the hospitality project coordinated by the NGO Luciano Lama is practically ignored by local politicians. None of them had heard that thousands of fatherless or motherless children from BiH had been involved this program. Judging by how many politicians know what is happening with one of the most vulnerable groups in society, children without parents, it is no wonder that young people want to leave the country.