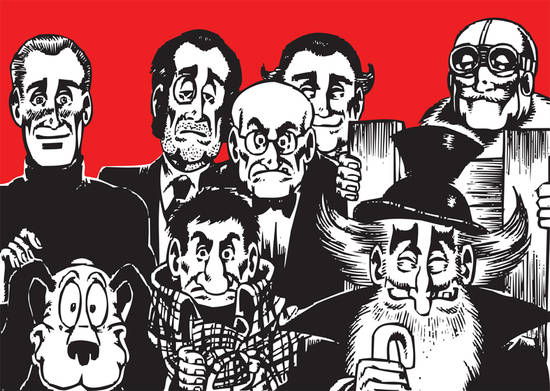 Professor Daniele Onori, the cultural attaché at the Italian Embassy in Sarajevo and curator of the exhibition “Alan Ford in BiH: yesterday and today”, explains the reasons behind a cult. The exhibition was on show within the framework of the Month of Italian Culture in Bosnia Herzegovina

Why an exhibition of comic strips?

This year we wanted to diversify the events to show various aspects of Italian culture. Alongside those which have always been very successful - on the cinema, music or the Italian language - we decided to present a different example of cultural excellence - the comic strip. In this case, the character is probably better known in Bosnia Herzegovina and the area of ex-Yugoslavia in general, than in Italy.

The hero of the TNT group...

Exactly. Alan Ford naturally was a great success in Italy too, in the 70s and part of the 80s, but in Yugoslavia he became a real cult, interesting writers and journalists even in recent years. Alan Ford has had a considerable influence on everyday language, banter and generally on pop culture in this region.

How did this happen?

There's no single answer. We can just say that Yugoslavia was the only country in the world where Alan Ford was such a success. Translations have been attempted in other countries, from France to Brazil to Denmark, to no effect. Yugoslavia was the only one to welcome Alan Ford, as its own. Evidently in the characters and their behaviour, Yugoslav readers found something which spoke directly to them.

How could an author from Milan like Luciano Secchi (Max Bunker) be in tune with a sense of humour so particular as the Balkan one? 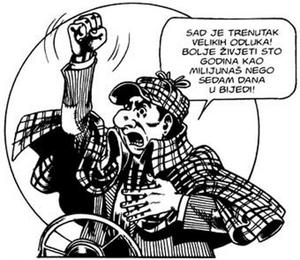 I think much of the credit goes to the translator, Nenad Brixi. Brixi was a real genius, and doubtless one of the main reasons for Alan Ford's success in Yugoslavia. He managed to turn Max Bunker's Milanese idiom into a Zagabrian dialect which seemed both exotic and funny to non-Croatian Yugoslavs too, especially Serbs and Bosnians. In fact, to be precise, Alan Ford was not successful throughout Yugoslavia but only in the republics speaking the same language, with some variation, that is, Serbo-Croat. Editions in Macedonian or Albanian, for instance, had limited success. Without this work of Brixi, who also discovered Alan Ford and was the one to propose him to the Croatian publisher Vjesnik, probably nothing would have happened.

Alan Ford has however a specific social and political line, as well as its humour. How were these aspects perceived on the other side of the Adriatic?

That's true. Magnus and Bunker were among the first in Italy to write comic strips which contained elements of social criticism. But it was precisely in this, in the social satire and the black humour of Alan Ford, that were found the elements which the Italian and Yugoslav mentalities had in common.

An attitude we could euphemistically define as a difficult approach to work, an inability to programme. I can't think how to define it better...

In the TNT group nothing works, is that it?

Yes, but in the end things somehow work out, the group wins, defeating the enemy and, even without earning it, gaining a positive result. There is, however, a more important political aspect to consider.

These political references were therefore welcome to the political powers in Yugoslavia too...

Yes, even though we have to remember that the linguistic and cultural adaptations made by Nenad Brixi removed beforehand, or put into second place, aspects which might be unacceptable. Some associations were however made directly by the public without intervention by the authors or translator.

The Month of Italian Culture in Bosnia Herzegovina , in its second year, was inaugurated on November 3rd with the photographic exhibition “Shots of the world”. Concerts, shows and meetings have been staged throughout the month, along with the week of the Italian language and the week of New Italian Cinema.

The character of Number One, who was seen as an obvious reference to Tito. This was, of course, an unconscious parody since Magnus and Bunker were certainly not thinking of Tito when they wrote the strip, but somehow that's what happened.

Was the Yugoslavian version of Alan Ford ever censored? 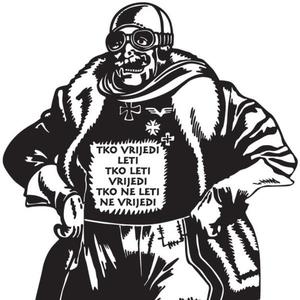 Yes, but in a marginal form. However in our exhibition we have chosen to illustrate this aspect too, as it reveals interesting cultural elements, comparing the Italian and Yugoslavian situations at that time. Rather than censure we should talk of cultural adaptation and the translator's choices.

Multiple, especially in music and the cinema. The Prljavo kazalište , the historic rock band of Zagreb, took their name from an expression which appears in “Broadway”, an Alan Ford number, and the Superhik (Superciuk) are a Macedonian punk rock group, to cite just two. Then Kusturica's film “Black Cat, White Cat” has a character who reads Alan Ford the whole way through and is an obvious alter ego of Grunf. Alan Ford is an integral part of the popular culture of the countries of ex-Yugoslavia. And I don't believe this refers to only one generation, since young writers like Filip Andronik , who helped us envision this exhibition, have attributed importance to Alan Ford in their own personal development.

What can the people of Sarajevo find in this exhibition?

The editorial history of Alan Ford in Italy and in Yugoslavia, through the outside covers, comic strips and a series of displays. We have the first and last illustrated cover designed by Magnus, the first appearances of important characters like Superciuk and Number One, and examples of illustrated covers by artists after 1975, when Magnus left the publishers Corno.

Are all the texts bilingual?

Certainly. A large part of the exhibition is dedicated to an historical elaboration, to the authors, to a general history of comic strips in Italy and to the reasons for this one's success in the Balkans. The part which I'm particularly proud of compares the Max Bunker's Italian version with the translation of Nenad Brixi.

Unfortunately Nenad Brixi is no longer with us...

No, he died towards the end of the 80s. His work has been carried on by his son, Davor Brixi.

So publication of Alan Ford has never been interrupted in the ex-Yugoslavia zone?

It has in fact continued both in Italy, where most stories are always signed by Luciano Secchi, and in some countries of ex-Yugoslavia. There are Croat editions, Serbian editions, continual reprints and – latest news – the first Bosnian edition of Alan Ford is soon to be published.

Who is handling it?

The publishers Agarthi Comics , who collaborated with the Italian Embassy in setting up this exhibition.