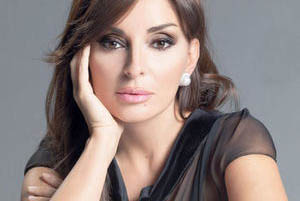 Azerbaijan is grappling to come to terms with a fresh Internet news scandal. This one doesn’t concern pesky domestic bloggers who tweak government sensitivities. And it is not about media rights. Rather, it covers a topic generally given a wide berth in Baku, even by Azerbaijan’s political opposition -- First Lady Mehriban Aliyeva

Aliyeva over the past few weeks has become the subject of unprecedented coverage in foreign newspapers. First, the right-wing Italian daily Il Foglio published an article December 3, using unnamed diplomats as sources, alleging “informal meetings” of a possibly romantic nature occurred in Berlin between Aliyeva and Belorussian President Alexander Lukashenko.  Then, on December 12, a British daily, The Guardian, published a story about a WikiLeaks cable, reportedly prepared by a US Embassy staffer in Baku, describing the political influence and business interests of Aliyeva’s family, and speculating about the First Lady’s possible use of plastic surgery.

The Il Foglio allegations, accompanied by a photo gallery entitled “Too Beautiful for a First Lady,” seem tabloidish in making a preposterous claim. Among foreign readers the report appeared to inspire no more than a shrug of the shoulders. But in Azerbaijan, where the First Lady’s image is sacrosanct, it has struck a raw nerve.

Azeri culture does not tolerate public discussions of a man’s wife; that rule takes on even greater weight where the glamorous 46-year-old wife of President Ilham Aliyev is concerned. While opposition media outlets may daily criticize the president and government, very rarely do they dare write anything negative about the First Lady.

That means the Italian newspaper report shocked many Azerbaijanis. Even though no Azerbaijani media outlet has reprinted or written about the Il Foglio article, the story’s publication has become one of the hottest topics of discussion in the Azerbaijani capital.  Baku residents have been able to slake their thirst for rumor and innuendo by accessing Russian-language translations that have appeared in Russian and Armenian online media since December 8.

The government was quick to respond. In a December 9 statement about the Il Foglio story, the First Lady’s protocol service expressed “extreme indignation with the slanderous insinuations published in Il Foglio, which discredit Mehriban Aliyeva’s honor and dignity.” Calling the report libelous, the service speculated that “some forces which are not interested in the growing prestige of our country and the international authority of Azerbaijan’s first lady” had planted the article. It has demanded a public apology and a full retraction by Il Foglio. Italy, it should be noted, has strong energy ties to Russia, while Moscow and Baku are backing competing energy-export pipeline projects in the Caspian Basin.

Representatives of Il Foglio, based in Milan, did not respond to requests from EurasiaNet.org for comment.

While many Azerbaijanis -- regardless of their political loyalties -- dismiss the allegations as “a dirty load of rubbish” or “simply impossible,” only a few media outlets have even published the statement from Aliyeva’s protocol service. Those that did, published it without any reference to the article in question.

As a member of parliament, deputy chairperson of the governing Yeni Azerbaijan Party, a goodwill ambassador for UNESCO and the Organization of Islamic States, and head of the charitable Heydar Aliyev Foundation – no other woman in Azerbaijan has such a prominent -- and uniformly positive -- public image.

To suggest otherwise is to risk incurring the wrath of President Aliyev, who is known among Azerbaijani journalists for having greater tolerance for public criticism of himself than of his family. A 2010 story by The Washington Post about multi-million-dollar property in Dubai allegedly owned by the president’s 13-year-old son, Heydar, has been cited as contributing to a flare-up of tension in Azerbaijani-US relations.

While Il Foglio has caused a stir for touching on what is seen as President Aliyev’s personal honor, the WikiLeaks information, provided via The Guardian, has not.

The alleged 2010 US embassy cable, which has been republished in some Azerbaijani media outlets, names the First Lady’s family, the Pashayevs, as “the single most powerful family in Azerbaijan,” with holdings in construction/real estate and the financial and telecommunications sectors. The family, it claims, uses “government mechanisms” to keep out business competitors, while maintaining de facto control of certain ministries -- including Culture and Tourism, Youth and Sport, Health, and Education -- that are seen as under the First Lady’s domain.

It describes the First Lady as an MP never seen in parliament and a person “poorly informed about political issues.” It also ventures into criticism of her appearance. A fashionista who has been photographed for Russian Vogue and Harper’s Bazaar, Aliyeva, the cable reported, “appears to have had substantial cosmetic surgery” and cannot display “a full range of facial expression.” Her dresses were deemed “provocative even in the Western world.”

The Azerbaijani government has earlier dismissed the WikiLeaks releases as untruthful, and is expected to raise the matter privately with US officials. As with the Il Foglio article, any allegation made against the First Lady herself is not considered a matter appropriate for public debate in Baku.

The public focus on the Il Foglio report is continuing. Explanations for why the article appeared vary from Russian revenge for previous WikiLeaks disclosures about President Aliyev’s criticism of Russian President Dmitry Medvedev and Prime Minister Vladimir Putin, to a “provocation” from “the Armenian lobby.”   Individuals asked about their reactions to the article declined to be named. One Baku-based political analyst, who also requested anonymity, believes that the government will use all possible official and unofficial means to make Il Foglio apologize publicly. “It is known that Ilham Aliyev hates when the media writes negatively about his family, but, in this case, it is really a personal offense, which is inexcusable in Azerbaijan,” the analyst said.