Armenia and Azerbaijan: Garden of Peace between the opponents 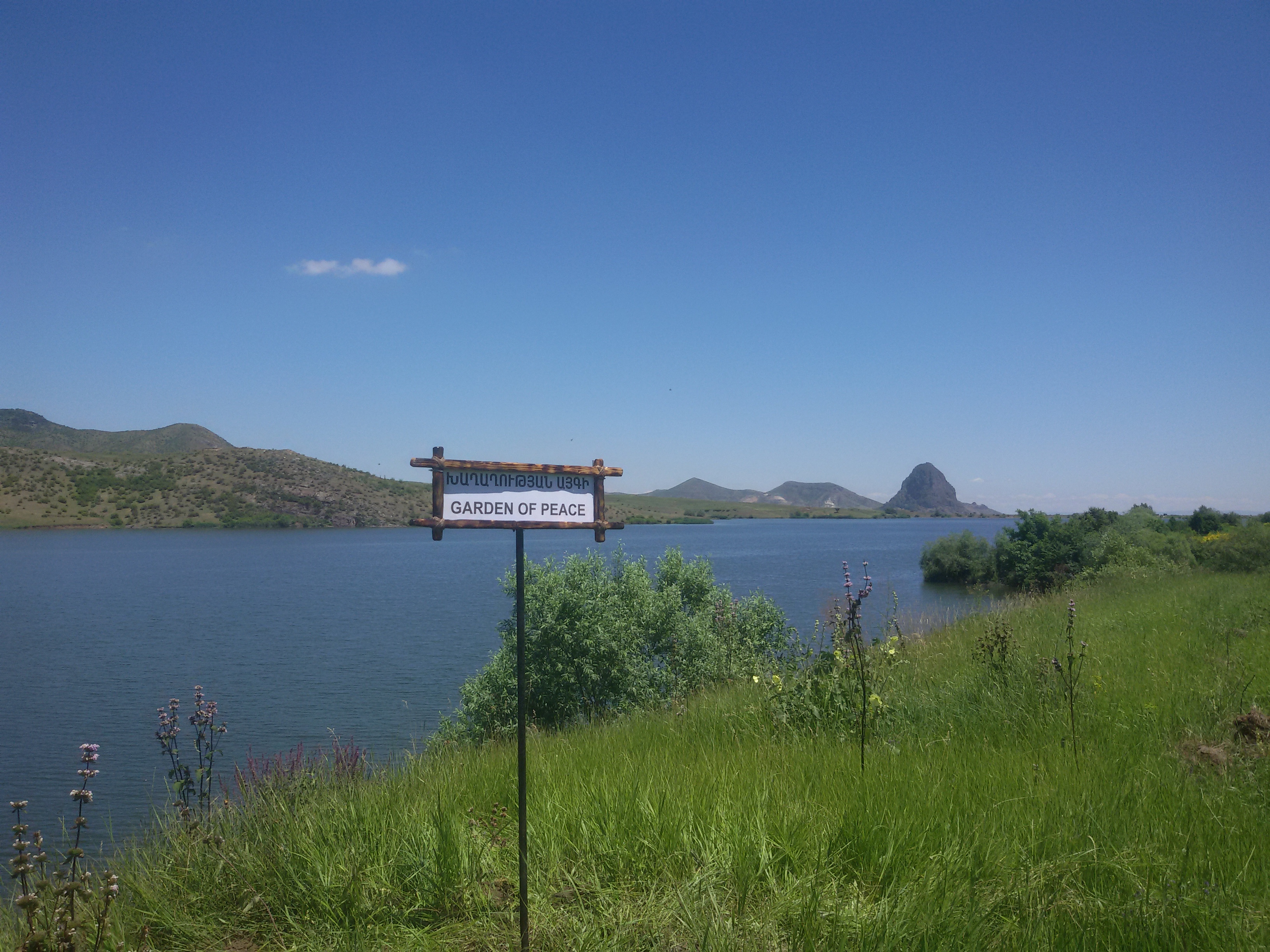 Cultivating the land in villages on the Armenia-Azerbaijan border is very dangerous. Nevertheless there are those who go on, dreaming of peace

The Republic of Armenia does not have water boundaries with neighboring states. In this regard, the village Berkaber of Tavush region, in the frontier of Azerbaijan, is unique: the Armenian-Azerbaijani border is drawn with water here. The Joghaz reservoir, built in Soviet times, is located on the Armenian-Azerbaijani border of Berkaber. Berkaber is on one side of the reservoir and on the other is the Azeri village Mezem. Joghaz is in the target today. 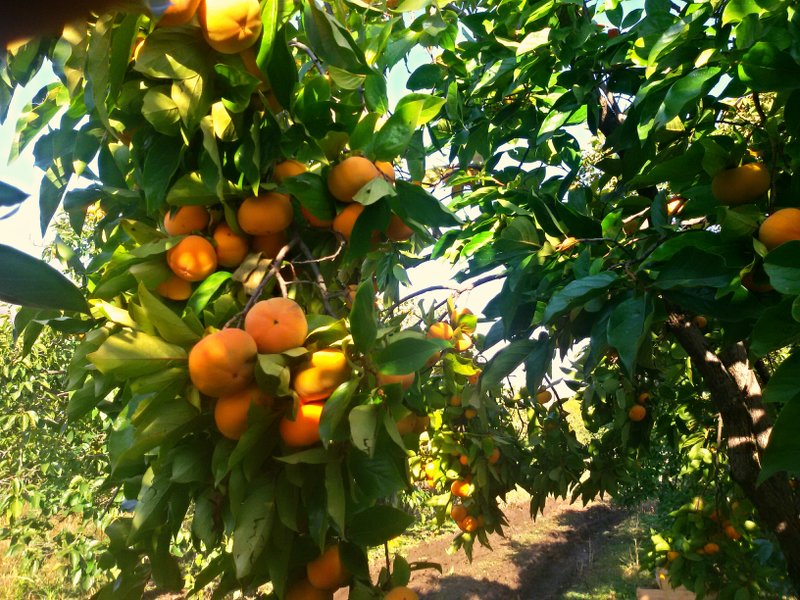 The "Garden of Peace" (Photo by Armine Avetisyan)

The life on the border

The construction of Joghaz reservoir began in the Soviet times - in the 1970s. The authorities of that time decided to use the space between the Armenian Berkaber and the Azerbaijani Mazam villages to solve the irrigation problems of the region and to build an artificial reservoir. The Armenians and Azeris started building the reservoir together and established gardens together. In translation Berkaber means giving an abundant harvest. The village has always been famous for its fruit trees.

“In 1988, my parents set up an orchard garden of persimmon on a 3 hectare land lot. We have more than 800 trees and it's already 25 years we get harvest. After the collapse of the Soviet Union, however, my parents' dreams fell apart, and the dream to do agricultural work became an extreme struggle”, says Ara Khudaverdyan.

In the early 1990's, Berkaber was one of the hottest spots in the Armenian-Azerbaijani war. Many buildings were almost completely damaged by gunfire in the village. About 900 hectares of orchards are currently under the control of the enemy. In the Armenian villages, just 500-800 meters from the Azerbaijani positions, there has been an undeclared war for over two decades. Although Armenia and Azerbaijan officially are not in a fight, there is no single day in Berkaber without shots heard from the Azerbaijani side. During these years, many houses, cars have been damaged, peaceful civilians were injured and there were even victims.

“Our garden is adjacent to the border. The distance is just 300 meters. Whenever I work in the garden, with the naked eye I can see the residents of Azerbaijani Mezem village who work in the field. We are so close that I can extend my hand and greet my "neighbors", but I do not say hello”, says Ara, smiling.

Ara is 32 years old. He says there was a time when he intended to leave the village. He didn't see any future in his village. He lived and worked in neighboring Georgia for some time. In 2016, during the April war he returned to Armenia and from that day decided that he won't leave his homeland and will help his family to upgrade the garden.

Ara dreams that there will be a time when there will be no formal rest in their village, but the war will really be over between the sides. Having dreamed about peace, two years ago the garden was rebuilt with the help of a philanthropist, again the active development of the garden went on and it was called “Garden of Peace”.

“We often work in the garden at night so that we are not seen by the adversary. My father and I cultivate it; we are used to the night work. When I work in the garden, my phone is mostly in silent mode, but I always switch on the “vibration” and keep it in my pocket. We have an agreement with our family that if the enemy suddenly starts firing or attacks, they will call me immediately”, says Ara.

During these years the Khudaverdyans have already lost 2 cars. They were damaged by shots from Azerbaijan; fortunately the family had no victims. 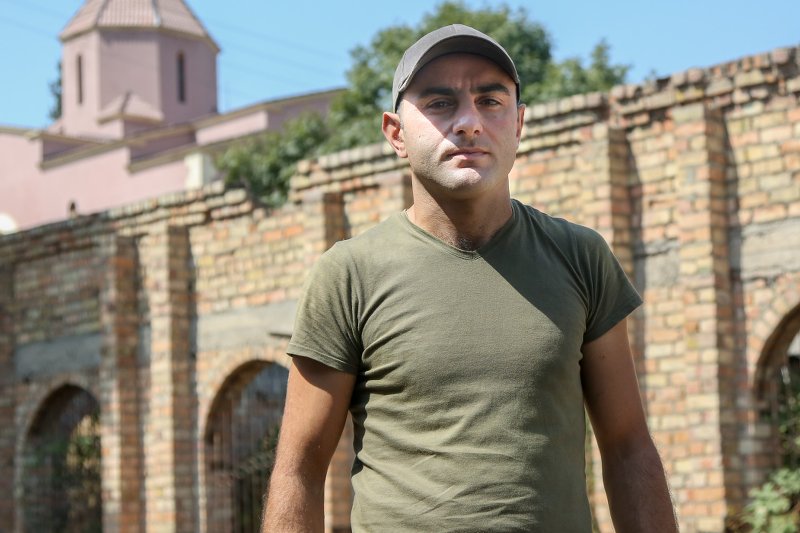 “Sometimes people ask us if we intend to use the modern agricultural technologies, hail-protection networks for protection against hail. I always point out that the hail falling from the sky, is not a danger for us, an iron hail from Azerbaijan is falling on us, of which no technology can protect”, says the young farmer.

According to Ara, beyond the border the villagers are cautious. They also do their work especially during the evening hours.

“We not only cultivate the garden at night, but also catch fish.There are good fishes in the reservoir - the borderline, which both we and the Azerbaijanis hunt. Especially during the night hours, otherwise you will not go home safe and sound. There are people in our village, who got injured during the fish hunting”, says Ara and adds that he doesn't go to catch a fish; it doesn't mean that he is afraid to be injured; simply his job is to cultivate a garden.

The garden, cultivated at the cost of life, is profitable

Months after rebuilding the garden, with the aim to sell the harvest, with the help of “Border” NGO and the “Support of Organic Farming Initiative” program, Ara Khudaverdyan has set up an organic dried fruit plant. In this way the product is now sold not only in the local market, but also is going to be exported. Ara has already participated in two international exhibitions; the organic dried persimmon was presented at international exhibitions in Dubai and London.

“Due to its taste properties, it has attracted the interest and demand among participants from different countries. Even the Turks liked our dried fruits; it's a pity there were no participants from Azerbaijan to feel the taste of «peace»”, says Ara, adding that there are already arrangements with the United States, Russia and Bulgaria to export dried fruits.

The Khudaverdyan family intends to expand its activities, wanting to enter the international markets, confidently noting that whatever happens, the garden will never remain uncultivated.