Osman Taka, the warrior who enchanted his enemies 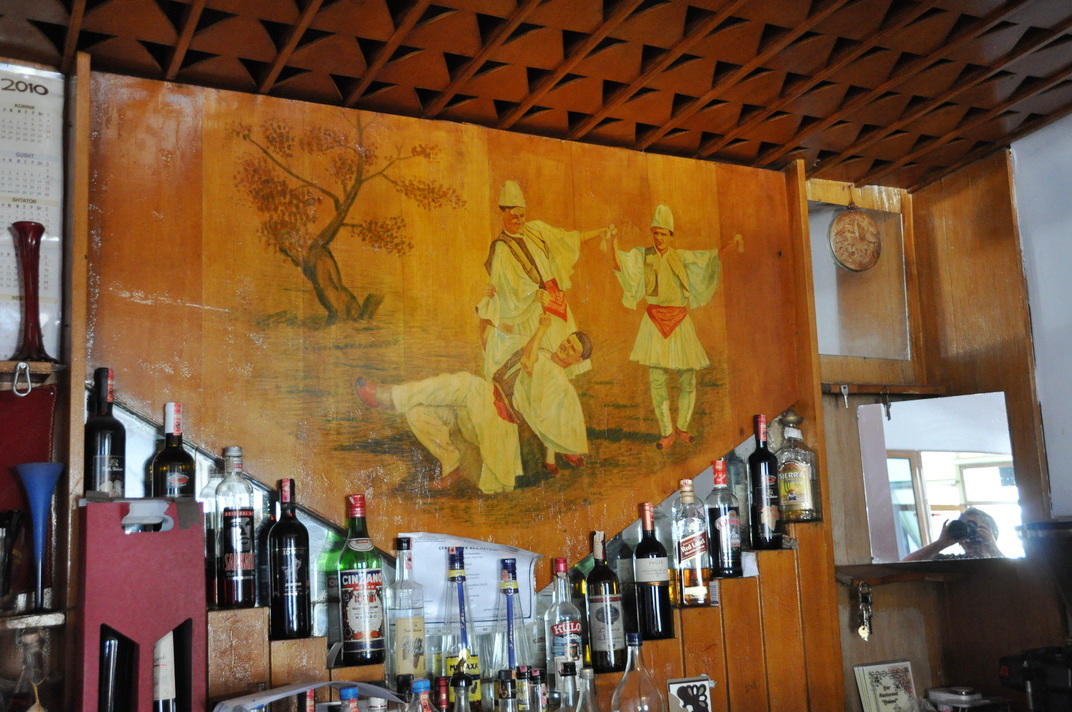 A contemporary reproduction of Osman Taka's dance at an inn in Konispol (Photo F. Polacco)

Osman Taka, a young warrior who saves himself from a death sentence conquering the soul of his enemies with the beauty of his dance. A legendary tale from Epirus, on the border between Albania and Greece

It really does look like a legend. Like that of Sheherazade, the oriental girl who saves herself from death by recounting a more passionate story, every night, for a thousand and one nights. Or that of Arion, the Greek citharode whose melodies recall from the sea the dolphin that will keep him from drowning, carrying him to land on his back. This time, however, the story is true, and as such is reported not only in searchable sources, but also in the stories of the children of those who lived there. It is easily passed down by word of mouth, since it does not go back to such remote times as to make it colour in myth, or to distort it with too many generational passages, since it takes place in the second half of the 19th century. And the protagonist is not an artist by profession, nor a girl with a fertile fantasy, but a young warrior who grew up in a small village of Epirus.

The place, although little known, could not be more enchanting: like an interminable dragon, it extends over the bluish profile of Corfu, the island of the Phaeacians where another castaway, Ulysses, kept his saviors awake through the night by telling the tale of the Odyssey. Before the sea opens a fertile plain, which at times welcomes quiet ponds, and elsewhere rises up in hills occupied by villages, thick forests, simple groups of houses. Yet, immediately beyond a canal that connects the largest of these lakes to the sea, stands the archaeological pearl of Butrint, since 1992 a UNESCO World Heritage Site.

Konispol, the village of Osman Taka 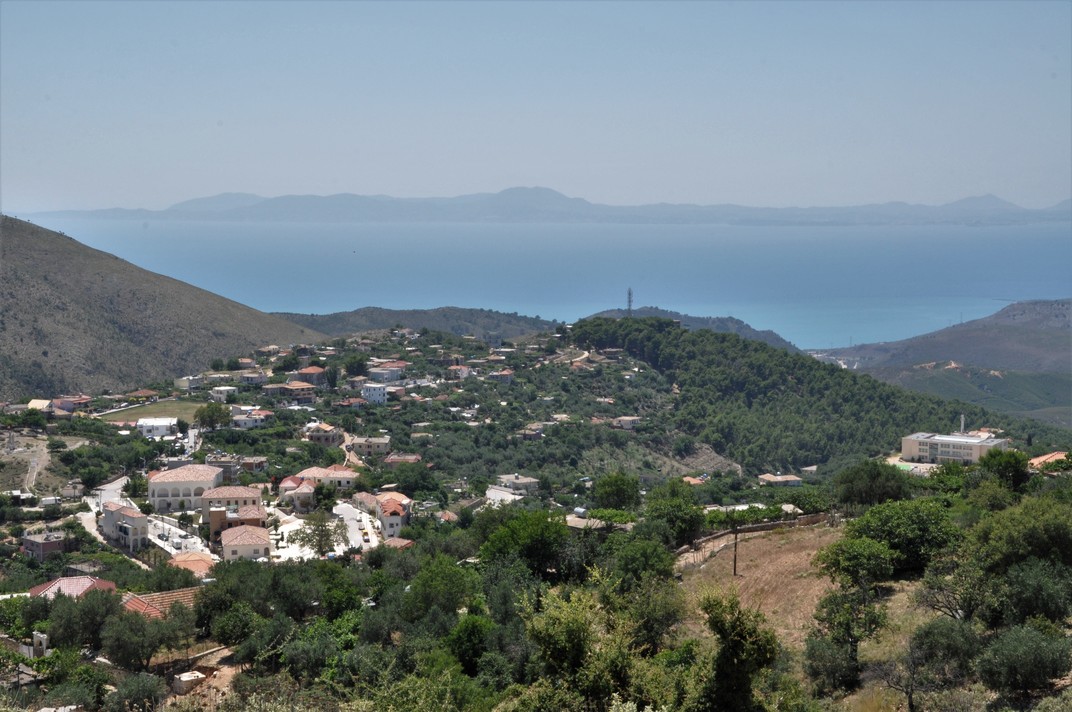 The village of Konispol seen from above (Photo F. Polacco)

Behind all this, the mountains of Epirus stand out, spare and solemn. A few days ago I climbed to a village that lies on a field under their peaks, hoping to pick up the remains of this story that seems like a legend, the most recent of those that saved a life – assuming there were any. Konispol – this is the name of the place of origin of its protagonist – is today a village of a few thousand inhabitants, just inside the borders of Albania for those coming from Greece.

The local border post sees little movement, as almost all the tourists who land further south, in the port of Igoumenitsa, are headed to Corfu or the beaches of mainland Greece, while the Albanians heading to the neighbouring country choose the better connected pass of Kakavià, some dozens of kilometres more inland. Anyway, no one who does not know this story would have reason to deviate, once passed the customs, on a paved road that climbs to the left, and which bears the indication of Konispol, the inhabited area almost invisible from below.

For me too, it used to be like this. Then, wandering the web looking for some Caucasian dances, I came across a footage of an Albanian dance, which attracted me because it bears the name of an individual, the warrior Osman Taka. Now, anyone who has travelled in the Balkans knows how much traditional dances are rooted in local culture – and also how beautiful and varied they are, from Greece upward. However, when you happen to see one of the very few available pieces of footage of Osman Taka, you immediately feel something different: the melody, the rhythm, the steps, the gestures of the dancers (all men), their excited and restrained elegance – you do not need to be an expert in dance to understand that this one draws on a sphere that goes far beyond local traditions, national heritage, or ethnic pride.

Yet, these ingredients are all present: indeed, the protagonist belongs to the ethnic group of Çami, a people of Northern Epirus – as the Greeks and virtually everyone else call it – or in Çamuria, as those nostalgic of Greater Albania call it. A proud, now lost ethnic group, especially after the bloody, tragic events that saw it involved and protagonist during the Second World War and then in the following, bloody Hellenic Civil War. Osman Taka was not just a warrior but a rebel, a protagonist in the struggle of the Albanian Epirotes – or better, in this case, the Çami – against the Ottoman Empire, which ruled over these lands for four centuries. He was therefore, in all respects, a historical character (1848-1887), belonging to one of the wealthiest, most illustrious local families.

But what makes the story – and therefore the dance – special is something else. True, young warriors were often also talented dancers – not only because some ancient dances were born as warrior dances, but because dance and combat, especially the hand-to-hand fighting typical of the past centuries, require similar qualities: physical power and dexterity, promptness of reflexes and precision of movements, sense of measure and balance, and rhythm in action. All these qualities coexist in a strong, lean body, solid but well proportioned, agile and well shaped. Yet, all the written and oral sources I read and the people I spoke with agree that Osman Taka was not a dancer-warrior like any other. Beautiful as well as strong, virile and elegant together, he excelled above all because of his choreutic skills as well as for his warrior prowess.

Here, historical sources and the locals' stories partly diverge: history highlights Taka's political role as the young leader of anti-Ottoman rebels, who fell into the hands of the rulers and was put to death. According to the locals, descendants of his fellow countrymen, at the origin of the story there was the rape of Taka's young, unmarried sister by a group of Ottoman soldiers. According to archaic Albanian rules, Osman reacted with revenge, which led him to kill the perpetrators of the misdeed.

Under the veranda of a new white house in Konispol, cool and ventilated even in the summer noon, Vullnet – perhaps the last dance teacher in the village – tells me that after the massacre the young man lived in hiding to escape the Ottoman gendarmes, obviously bent on catching him. Locked up in a sheepfold among the animals, Taka was allegedly betrayed by a fellow villager, taken to prison and then to the highest representative of Ottoman power in the region, the Vali of Ioannina.

In cases like these, death sentence by hanging was inevitable, and so it was decreed. Here Vullnet, that I asked – among other things – to explain to me, whenever possible, the sense of some typical dance movements, stresses matter-of-factly that the turns on one foot performed by the dancer, kneeling, recall the rotations of someone hanging from the rope... But that did not actually happen, because this story has an unpredictable conclusion, and the brave, beautiful Osman did not end up hanging.

Even the harsh justice of the agonising Ottoman empire granted a last wish before an execution. And guess what Osman Taka wished for? To dance: for the last time in his life, to dance. With all the trimmings, though: the players were brought from Konispol, with their beautiful instruments, and even his usual dance companions, while a sofra was set up in the courtyard of the palace of Ioannina on a special wood platform. Thus, under the eyes of the Vali and his family, of all local officials and garrison officials, Osman Taka began to dance.

It is said that it was a short dance (even today, it lasts just over three minutes), but so intense and touching, full of pride and melancholy, of power and grace, that everyone was left speechless. It was the Vali's wife who first broke the silence, and protested that no, such a good and beautiful dancer should not be hanged. And all those present then lined up with the request, even the companions of the gendarmes killed. Finally the governor, who, like the others, had admired in his heart that dance never seen before, publicly declared that the young man deserved to live so that he could continue to dance, in that way, with those steps, in that inimitable way. Then, availing himself of his powers, he cancelled the sentence, and sent Osman Taka alive, with his companions, back to Konispol.

At this point Vullnet explains to me, as well as his somewhat inaccurate Greek which is our communication language will allow, what is perhaps the key stage of the dance: the one in which the protagonist, supported by a hand by one of his companions, kneels and slowly folds backwards, until it touches the ground with the nape of the neck, thus arching the chest upwards. On that chest, then, another dancer rests his foot, rising above it with all his weight. Now, just when the dance seems to be over, another companion, or the same one, touches him, as he gently touches Osman's hand, and the latter, slowly as he had fallen, gets up on that faint handle. "Even if trampled on, the oppressed and downcast man gets up", explains the thoughtful teacher of Konispol. But everyone sees that the deepest sense of this true legend, and the dance that remembers it, is not exactly that. For Osman is not redeemed by the force of rebellion, or resistance to the oppressor. The young warrior saves himself, and returns to the life he thought lost, by conquering the souls of his enemies – historical, ethnic, personal – with beauty, the beauty of his dance. With "soft power", we would say today, borrowing geopolitical lexicon. 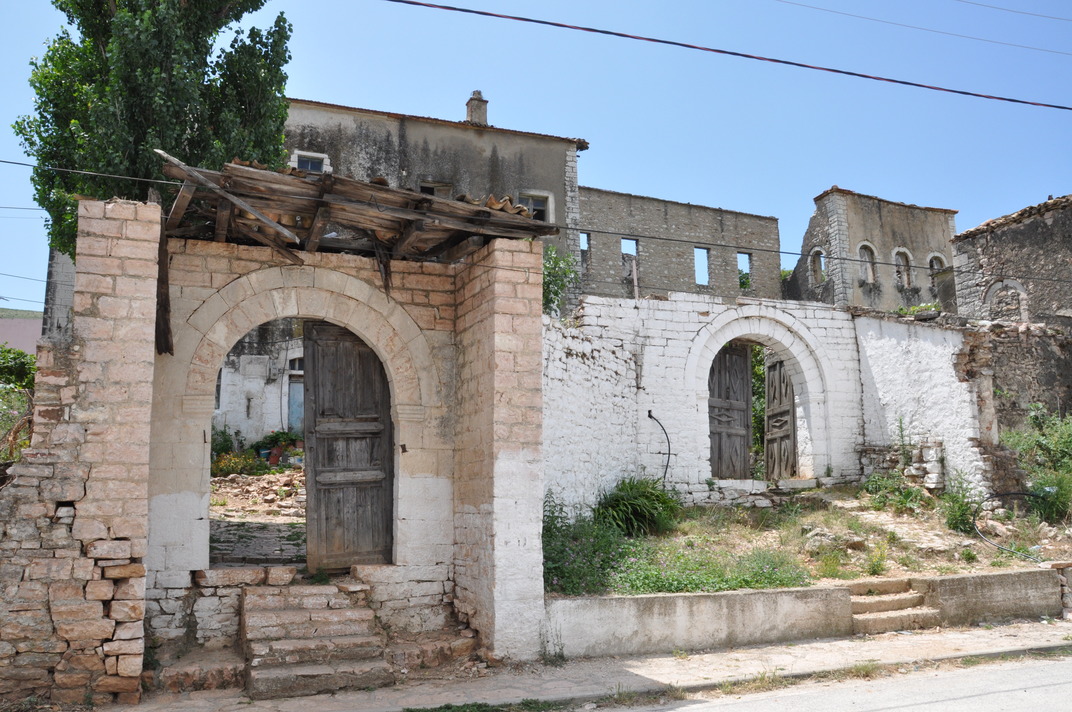 The ancient home of Osman Taka as it appears today, in Konispol (Photo F. Polacco)

To my surprise, I have not found any monument in Konispol, not even a plaque dedicated to the illustrious character by his fellow villagers, although they do know the story. Only in a place where I stopped for lunch, the owner recently decided to portray some episodes of this story of one hundred and fifty years ago with vivid paintings. Instead, I managed to see, accompanied by a young dancer in the village, what was once Taka's home: it still exists, stately, wide, all in stone; but it is almost completely in ruins. Only the central part is reused as a much more humble house, and I could not ask to enter it because that day the person who lives there, not a descendant of the ancient owners, was out. Who will stretch out their hand today, in memory of Osman Taka, the warrior capable of enchanting his enemies?