Hungary, after the referendum 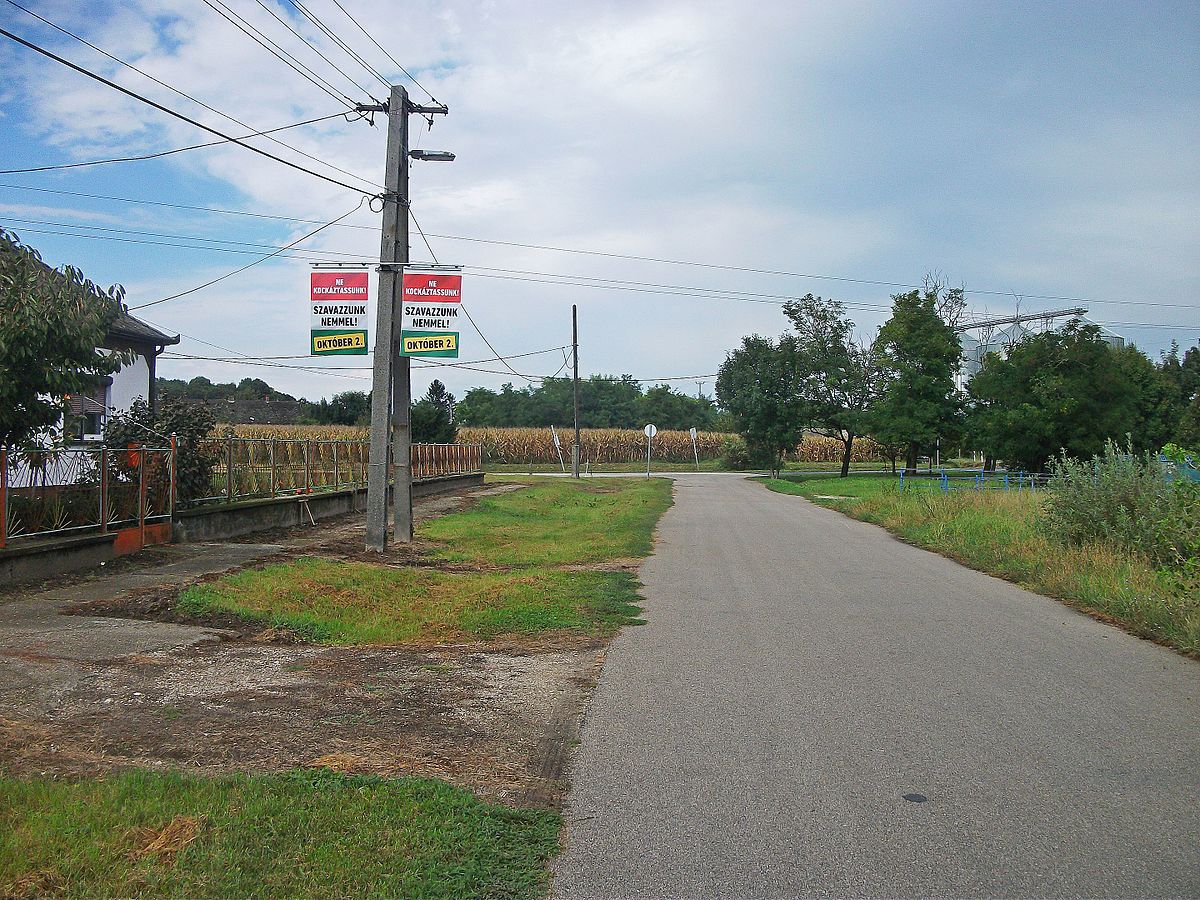 After a controversial and divisive referendum, what is the outlook for Hungary and the region on the subject of refugees? We interviewed Gábor Gyulai, of the Hungarian Helsinki Committee

The missed quorum proved decisive in the referendum of October 2nd. Along with a coalition of 22 NGOs, the Hungarian Helsinki Committee had called for a white ballot – are you satisfied with this result?

The Hungarian Helsinki Committee asked citizens to embrace an active form of electoral participation to express their disagreement with the abuse of this important democratic institution. This form of active resistance goes beyond the mere passive boycott, i.e. not going to vote, which requires less effort, but leaves more room for interpretation – you never exactly know why someone did not vote.

Over 220,000 people responded to our appeal to annul their ballot, and this is an important result, especially considering that this form of political expression has no tradition in Hungary.

More reports, analyses and news in the dossier "Balkan Route"

In addition, 56% of voters did not go to the polls. This is not remarkable in itself, since turnout – especially in a referendum – is generally very low in Hungary, but it is still a failure for the government, which spent over 50 million Euros for the referendum and the hate campaign that preceded it, and a little yet important victory for the front of solidarity towards refugees.

For months, omnipresent xenophobic propaganda depicted immigration as an evil phenomenon and refugees as terrorists threatening Hungarian culture – a hate campaign without precedence in Europe, financed by the national budget. Only some NGOs and small organisations, like the sarcastic Two Tails Dog Party, spoke up against such massive propaganda. We are very pleased that, despite this stifling brainwashing, the vast majority of Hungarians decided not to take part in this costly and damaging sham, even though many people share the government's aversion to refugees.

The referendum campaign, based on disinformation and incitement to xenophobia, raised serious concerns about the country's internal polarisation. What is your position regarding the role of the Hungarian media?

Public opinion is already very polarised, and there is little dialogue between supporters and opponents of Viktor Orbán.

As for xenophobia, actually we cannot speak of polarisation, since the absolute majority is against immigration and solidarity with refugees. According to all surveys, the Hungarian society is among the most xenophobic of the continent, for many and complex reasons – historical traumas, the lack of a colonial past, and the fact that most Hungarians do not speak foreign languages and have no means to spend their holidays abroad - contribute to a feeling of isolation.

The main reason, however, is the lack of personal contact. Very few immigrants live in Hungary – only 1.5% of the population is of foreign nationality – and they are concentrated mainly in Budapest and in some other cities. The majority of them are from Europe: Romanians, Slovaks, Serbs, Ukrainians, Germans, Austrians, or Italians.

At present, there are only 2-3,000 refugees living in the country. Thus, Hungarians have few opportunities to get in touch with migrants, not to mention talk to them. Instigating hatred against a minority is often easier when the group in question "has no real face". It is very easy to convince the public of the "evil" nature of a group if this group is not visible in real life. This gives the media a very strong power, as the public has no other sources of information, and most media are directly or indirectly controlled by the government and willing to transmit any propaganda message. It is not surprising, then, that xenophobia has increased considerably in Hungary in 2016. The aversion of the silent majority has developed into vocal hatred, while the timid solidarity of a minority has turned into doubt.

The referendum showed that in Budapest and some urban centres, such as Szeged, on the border with Serbia, many still reject the xenophobia and inhumane policy of the Hungarian government, but at the national level we are a small minority.

The media have obviously had a very important role. If blatantly xenophobic messages and misinformation are repeated all the time on television during the broadcast of the Olympic Games, and every day the "news" in the press and on the radio talk about the dangers of immigration and the bravery of the government that fights against Brussels' "aggressive" policies, many people that have never seen a migrant begin to believe them.

This is obviously part of the general policy of the Viktor Orbán government, which tries to eliminate or weaken the checks and balances of the democratic system. If the media were sufficiently independent in Hungary, if the political power were not so unbalanced, if the civil and charitable sectors had the independence and the courage to speak up against the inhumane policy of the government, this hateful propaganda would never have worked.

In recent months, many humanitarian organisations have denounced the treatment of asylum seekers at the border between Serbia and Hungary. What are the relations between the two countries and how will they be affected by the outcome of the referendum?

The Hungarian policy of "maximum deterrence" has an obvious impact on the Balkan countries, especially Serbia. As Hungary blocks the flow of migrants at the border, this flow of forced migration will not disappear, but will head to other routes – as in the fall of 2015 – or more and more refugees will be stranded in Serbia and Macedonia.

Over the last two years, the Hungarian government has clearly demonstrated a lack of any kind of solidarity with those fleeing war or persecution, but also a lack of interest for the consequences that its policies have on neighbouring countries. Instead of looking for a humane solution based on regional cooperation, it decided to dump this responsibility on Serbia and the other countries in the region, much less prepared to face them in terms of capacity and infrastructure.

Geography, however, is a decisive factor that not even the Hungarian government can influence – high mountains, rivers, and (in the case of Bosnia and Herzegovina) the presence of mines make alternative routes much more difficult and expensive. Serbia and the Serbian-Hungarian border will therefore remain an important point of entry into the EU.

Hungary's policy to consider Serbia as a "safe third country", despite the contrary position of UNHCR, is at the basis of the quasi-automatic rejection of all asylum applications in Hungary – a violation of European and international asylum laws.

In light of the developments on the Balkan route in the last two years, how has the Hungarian Helsinki Committee adapted its intervention strategy in support of refugees and asylum seekers? And what are the next steps you intend to do in this area?

As a UNHCR partner, the Hungarian Helsinki Committee is the only entity that provides free legal assistance to asylum seekers in Hungary since 1998. In nearly two decades, we have helped over 15,000 asylum seekers.

In the last two years, of course, we had to adapt to new challenges. The increase in the number of refugees has prompted us to extend our activities. Since the Serbian-Hungarian border area has become very important, we have decided to employ significant resources in this region. In addition to "traditional" reception and detention centres, we regularly visit – as the only institution of civil society to do so – the two "transit zones" on the border with Serbia, where asylum seekers can enter the country legally, but in numbers arbitrarily limited by the government.

We believe that, in the light of the relevant case law of the European Court of Human Rights (ECHR), these transit areas constitute a form of unlawful detention, as they lack both legal foundation and guarantee of judicial supervision of what goes on inside them.

The anti-democratic reforms of the Orbán government have reduced the ability of the civil sector to influence the legislative process. Our local efforts have thus lost much of their influence. Therefore, we have no other option but to give international visibility to the violations of human rights – we do it by trying to inform in real time the international community and the Hungarian public of all developments, often being nearly the only counterweight of the government's massive communication machinery on this issue. We submit the cases to the ECHR and the European Court of Justice, and we maintain regular contact with various human rights monitoring bodies such as the Council of Europe or the United Nations, and also to the European Commission, which monitors the compliance of Hungarian policy with Community law.

We believe that Hungary is violating EU law in many practical aspects and will continue to work so that the Union finally intervenes effectively and manages to rectify at least the most problematic points, for example by putting an end to the numerous illegal rejections at the Serbian-Hungarian border.

We also believe that it is necessary to find a regional response and we are already working to strengthen strategic cooperation with NGOs in Serbia, Macedonia, but also Greece and Turkey. With our experience, we can help them extend their skills, and with a more effective "warning chain" we will be able to better document and prevent human rights violations such as ill-treatment or refoulement (unlawful forced return, ed.).